When's the right time to start a family? To this generation, it's never too late.

Jeffrey Thomas spends a lot of his time changing diapers, but unlike many of his fellow baby boomers, this Cambridge adviser to political donors is not celebrating the birth of a grandchild. Born in 1963, the second-to-last year of the boom, Thomas recently became a father for the first time.

He’s not alone among people his age. For some at the tail end of the boom, parenthood is just beginning. Although it’s hard to find accurate data on first-time dads like Thomas, the birthrate in Massachusetts in 2007 for women ages 40 to 44 was more than 70 percent higher than it was in 1990. The birthrate for women 45 and older nearly tripled over the same time period. Nationally, on the heels of advances in fertility treatments, births to mothers 50 and up have increased by an average of 15 percent a year since 1997. And there are plenty of local boomers who are still hoping to become parents for the first time. Of

Match.com members in Greater Boston, more than 250 childless men in the boomer range, ages 45 to 63, and about 50 women in the same demographic say they definitely want kids.

These boomers may not be the norm, but they’re making older parenting seem normal, broadening our ideas of the “right” time to start a family. “In the 1950s, you were an odd duck; today, nobody thinks anything of it,” says Andrew Cherlin, a sociologist at Johns Hopkins University in Baltimore.

Cherlin and other researchers say that many baby boomers, especially college-educated ones, became parents later in life because of school or their careers. “That can take a long time, and when it’s over, you still have to hunt for a husband or wife,” Cherlin says. Indeed, many boomers I talked to say they didn’t so much deliberately postpone children as find themselves waiting, usually because of difficulties finding a solid romantic partner earlier in their lives.

“I wanted to have kids for a long time,” says Thomas, whose dark beard is lightly flecked with gray. As one of seven children, he was surprised when his late 30s rolled around and he hadn’t met the right woman. “Parenthood is not something I wanted to do alone, and I wasn’t prepared to do it with just anyone,” he says. “I wanted most definitely to have a partner.” And, he acknowledges, he felt he had the luxury of time in a way his female peers did not. “It wasn’t a physical impetus for me to do it earlier.”

While living in California and running a congressional office, Thomas met his wife,

Rachel Weinstein (who was a college classmate of mine), when he was 39. She’s 11 years younger. Last year, at age 45, he became a first-time father to Omri Barak Thomas.

Not every boomer meets the right person or wants to keep waiting past a certain age. For women, whose fertility is more finite, that may mean contemplating single motherhood. “I waited as long as I could,” says Sara Suchman, a doctoral student at Harvard University who was born in 1964. “I was waiting to get married. But then I realized I could have the child without the husband.” Suchman had a daughter, Adina, two years ago using in vitro fertilization.

Watching blond-haired Adina play with a train set, Suchman says her decision to have a baby was difficult -- less because she was 42 than because she was single. But she is grateful for the technological and social changes that have made so many new choices possible for her generation. “It’s an amazing time and an amazing country, and I live in an amazing place,” she says, gesturing out her condominium window in the direction of Harvard Square. “Nobody bats an eye.”

Suchman adds that she comes from a family full of over-40 parents. She was born to a 42-year-old mother. Her older brother and his wife, both in their 40s, also have a 2-year-old child. “The shock in my family would have been if I’d married and had kids at 26,” she says with a laugh.

Biology, of course, poses different challenges for men and women. Men may feel more sanguine about the passage of time than women do, but women may be more likely to see single parenthood as a viable option. This distinction seems to have been oddly polarizing for some boomers as they hit their late 30s. Women who wanted children sometimes stopped focusing on meeting a guy even as men became ever more determined to wait for the perfect gal.

Susan Lawrence of Malden opted for single motherhood in her 40s. “I thought in my late 30s that I’d probably be adopting on my own,” she says. “I wasn’t closed to the idea of a partner, but I was ready to be a parent independently.” Lawrence, now 51, then spent nearly a decade exploring different options; in 2005, she adopted a 3-year-old girl named Tihun from Ethiopia.

“Things have come in their natural progression,” she says philosophically. “I couldn’t have done anything differently or more quickly.” Her choice of words reflects a truth that Census reports and studies so often seem to miss: Most of us don’t have full control over what happens to us at any given time, particularly when it comes to decisions that involve the hopes and dreams of others and the vagaries of fertility.

Whatever an individual’s reason for later-in-life parenting, many of the boomers’ experiences sound ageless: Parenthood is wonderful and it’s really hard; they miss movies and leisurely hours at the gym even as they delight in their offspring. Being older, they’re grateful to have more financial security than they did at younger ages, but they’re also aware they’ll be 60-plus when their kids go to college. Several say they quite consciously took advantage of freedom in their 30s when they sensed they might be older parents.

“I thought, well, other women will do fun things after their kids are out of the house, so I made a point of doing them before,” says Suchman. “I went to Mexico for a year. I traveled a lot. I have friends who are empty nesters at my age and doing those things, and I did them earlier.”

She says that as both an older mom and a single mom, she is careful to make sure her daughter has strong connections to extended family and friends. “The societal issue with older parenting is that you won’t have as much energy and won’t be around as long,” she says. “I do think about it. I’m very proactive about nurturing relationships beyond the two of us.”

Perhaps because these boomers imagined having children for some time and saw friends and siblings raising kids, they went in with their eyes wide open. While becoming a parent meant a major identity shift well into their adulthood, all say they were ready and eager for the change. “No matter how much you want to be a parent -- and whether you’re single or not -- it shifts stuff,” says Lawrence. “One benefit of being older, I really understood that. I chose that. I knew how my life would change.”

He is quick to say he doesn’t think older parents are generally better than younger ones, just that he personally is more equipped now for parenting than his younger self would have been. He chose to find a less “hard-charging” job in order to spend more time at home, a decision he thinks he would not have had the confidence or resources to do at a younger age. “I chose the work I do now because it’s compatible with being involved in my kid’s life and spending time with my spouse.”

A particular if unintentional joy for him is that his son’s early childhood will take place during the administration of Barack Obama. “My black boy will grow up with the middle name of a black president,” says Thomas (albeit with a variation in the spelling). “When I was growing up in the 1970s, that notion was fanciful.”

Still, he’s glad he and his wife didn’t wait for a second Obama term. Half in jest, Thomas offers this advice to other boomers hoping to become parents for the first time: “Hurry! Hurry! Get going. Sixty is just around the corner.”

Alison Lobron is an associate editor of CommonWealth magazine. Send comments to 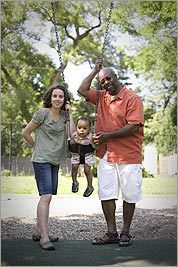 (Photograph by Kathleen Dooher) Jeffrey Thomas, his wife, Rachel Weinstein, and their son, Omri.
Your comment is subject to the rules of our Posting Policy
This comment may appear on your public profile. Public Profile FAQ