Let the handshake meet an end

In today's world, why cling to this surefire germ spreader? 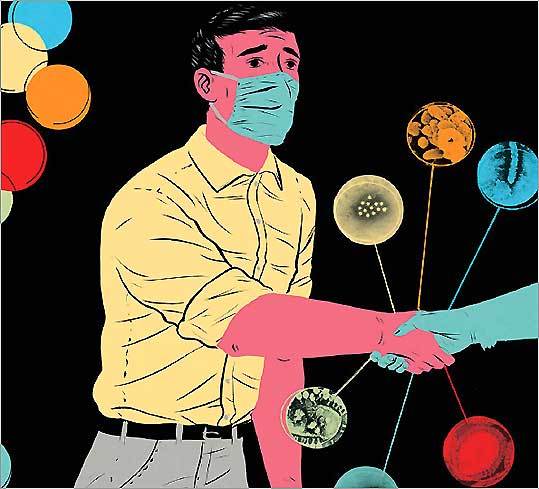 A few weeks ago, I met a construction worker who was immersed in a big sewer project. His hands, like his coveralls, were dark with grime. But he was a friendly guy, and we had just been introduced, and I didn’t want to be rude. So I did what we’ve all been conditioned to do since childhood: I thrust my right hand out to meet his for a good shake.

After looking at his filthy hands, he shot me a quizzical look, as if to say, “You can’t be serious.” Then he extended his comparatively clean right forearm. I grabbed onto it and shook, and we both smiled.

A couple of days earlier, my wife and I had been sitting around our kitchen table with some friends who all have kids the same ages. The talk naturally drifted to the fears swirling around swine flu and how common cases of sniffles and scratchy throats were automatically subjecting schoolchildren to seven-day sentences at home, a practice sure to continue now that we’re in summer-camp season. While some of the parents complained about over-reaction, one of the dads took a different tack. Isn’t it time, he asked, to retire the handshake?

My mind flashed back to that comment the moment my hand clutched the construction worker’s forearm. This worker clearly recognized the absurdity of putting politeness over common sense. Why didn’t I? With everything we now know about germs, about the ferocity with which trouble travels via hand-to-hand contact, why do we feel obligated to soldier on with this centuries-old tradition?

It’s not clear exactly why and when the handshake became our default in-person greeting. The most common explanation is that it was how a man, upon meeting another, could establish that neither was carrying a weapon. The practice dates at least to the Middle Ages, though some archeological evidence suggests it’s much older than that. We long ago stopped using leeches to drain the blood of the ill and spices to hide the stink of rancid meat. Yet for some reason this medieval ritual persists.

It’s especially true in the business world. Elaine Eisenman, the dean of executive education at Babson College, says that’s because the handshake is both a traditional greeting and a quick, unobtrusive way of sizing someone up. Does this person you’re contemplating doing business with have a firm, honest grip or a sweaty, flabby one? She says that when women like her were first entering management ranks, they learned to master the handshake. No wonder hers is as firm as a two-by-four.

Last month, swine flu officially became a pandemic. Public health officials have said so-called “social distancing” strategies -- sharply reducing contact with others -- have proved most effective in slowing the spread of previous outbreaks, such as the 1918 flu pandemic. And they told us to cut down on our handshakes as much as we could. Northeastern University heeded the advice, asking its graduates not to shake hands when receiving their diplomas during the school’s commencement ceremony in May.

The World Health Organization has been dusting off an earlier campaign to get people to drop the handshake in favor of an elbow bump. Good luck with that. Eisenman does a lot of international travel for Babson and has observed more global businesspeople shaking hands, even in Asia, where the bow has traditionally enjoyed a big edge. She says she’s had the same thought every time she has watched people gamely attempting an elbow bump: “They look moronic.”

Barack Obama’s campaign workers popularized the fist bump as a sort of hygienic secret handshake. But since Obama entered the White House, we haven’t seen much of it from him. In fact, after moving from hipsters to boomers, the fist bump now feels as dated as the electric slide. And so the search for a sensible replacement goes on.

Earlier this year, Brad Feld launched a campaign he called No More Handshakes in ’09. The MIT-trained high-tech entrepreneur was determined to stay healthy throughout cold-and-flu season. The results? Well, I’ll let him tell it. “My campaign was a total failure. I found that I was having the same conversation over and over, explaining why I wasn’t shaking hands. I got tired of it and decided it was easier to just shake everyone’s hands and then wash mine a bunch throughout the day.”

And, yes, he ended up with a nasty spring cold.

See more stories from this issue.
Your comment is subject to the rules of our Posting Policy
This comment may appear on your public profile. Public Profile FAQ