To enforce limits on how much fishermen like John Our are catching, the government is testing out onboard cameras. Excessive? He actually welcomes the scrutiny. 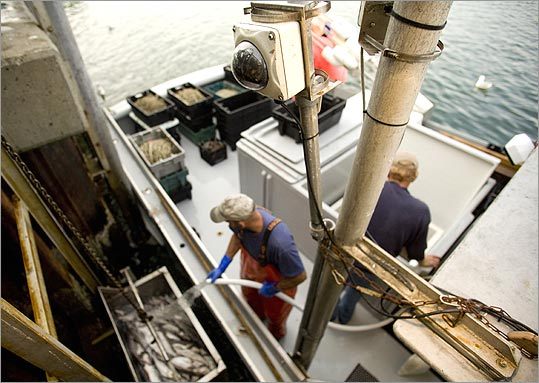 Frustrated with the old catch limit system, Chatham fisherman John Our signed on to a new yearly quota system and allowed his boat, "Miss Fitz," to be outfited with cameras that document what he brings in and prove that he's following the rules, as part of a pilot project. (Erik Jacobs for The Boston Globe)
By Cynthia Graber July 12, 2009
Text size – +

John Our drives a gleaming black Ford pickup truck with one bumper sticker plastered on the back in sharp white contrast. It reads, “National Marine Fisheries Service: Destroying fishermen and their communities since 1976.” Our believes government scientists don’t know as much about the ocean environment as they’d like to think and have created useless regulations. He blames them for the decline in fishing jobs. And yet Our may represent the government’s latest and perhaps last hope in its efforts to save not just the fish in New England’s sea but also the fishermen whose livelihoods they support.

The 47-year-old Our is tall and fit, with hair bleached strawberry blond and a faint sunburn streaking the bridge of his nose. He grew up by the same Chatham harbor that now houses his boat, the 42-foot Miss Fitz. His father worked these waters, says Our, and he saw the sea as an endless supply of bounty. Most fishermen in his father’s day navigated the waters in wooden boats loaded with hand-baited hooks. They’d drop those to the bottom of the sea, and each hook would attract a single fish, usually one of the species in demand: cod, haddock, halibut.

When local fishermen started using gill nets instead of hooks -- nets that could drag in thousands of pounds of fish -- and when boat engines ramped up power and could travel farther, faster, the fishing scene devolved into “the Wild West,” says Our. He remembers his father going out to sea with a shotgun when a dragger boat tried to sweep through his lobster traps. “He nearly killed the guy,” Our says and laughs. Fishermen grabbed at the opportunity to scoop up as much as possible, as quickly as possible. But in a story well known to most New Englanders, and certainly to all the fishermen, the fish started to shrink in size and number, disappearing from waters where they had once been plentiful. Today, many commercial species in New England are considered “overexploited” and in danger of collapse.

But he also faults the government response. The National Marine Fisheries Service, charged with overseeing the fisheries, sought in 1994 to protect the stocks by limiting the days fishermen could go out and the total weight of fish they could bring back each day. This pitted government against fishermen: Federal officials created increasingly strict regulations, and fishermen invented methods of outsmarting those regulations. But when it came to weigh-ins at the dock, the numbers didn’t lie. A fisherman might be restricted to 1,000 pounds, but his net could drag in 2,000 pounds, or 3,000, or 5,000. He’d often have to toss the rest -- many of them already dead -- back. “It killed me to have that kind of waste,” says Our. Perhaps worst of all, many fish stocks were not recovering.

New England’s fishermen were getting desperate. Many were unable to survive under a system they say forced them to spend more days on the water to catch fewer fish. Then, in 2004, one group of Cape Cod fishermen grasped at a straw. On the West Coast, fishermen had formed communities that were given a yearly instead of a daily catch limit per species. When they reached their yearly limit, they stopped fishing. The Cape Cod Commercial Hook Fishermen’s Association, made up of fishermen who use traditional baited gear, asked the federal government to allow them to create a cooperative, known in New England as a sector. They won approval and negotiated a communal limit they would share among sector members, based on each fisherman’s history of catch. “Hook fishermen from Cape Cod and people who weren’t hook fishermen were skeptical about whether it would work,” says Peter Baker, who at the time worked for the fishermen’s association. Baker now heads the New England fisheries campaign with the nonprofit Pew Environment Group, which aims to protect fish while preserving fishermen’s jobs.

Our was one of the skeptics: “I thought it was dividing the fleet; I thought it was playing into the government’s hands, and then nobody would end up with anything.” But he got increasingly frustrated with catching cod he couldn’t bring to shore. A year later, he and about a dozen others who fish with similar gear began discussions, and in 2006 they formed a second sector, called the Georges Bank Cod Fixed Gear Sector (“fixed” because fishermen drop their weighted nets in place on the ocean floor). For such a plan to succeed, members must prove to the government and one another that they’re not exceeding their limits. That demands increasingly detailed monitoring of the catch. With sectors, from the fishermen’s perspective, “monitoring is no longer something the government’s doing to try and stop you,” says Baker. “It’s also a way of making sure your peers aren’t taking more than their fair share and that you’re getting a fair shake.” Our agrees with Baker’s assessment. “We all know the honor system isn’t going to work,” he says.

Oversight is usually conducted by federal observers, who occasionally join the fishermen on expeditions. But Our has taken a step that may seem anathema to the classic image of the independent New England fisherman: He’s allowed video monitoring on all of his trips to sea.

Three large, glassy black eyes of the monitoring system stare at the deck, blind until the catch comes in. They come to life automatically when Our activates the hydraulic system that hauls the fish-filled nets over the side of his boat. Our does not have the code that controls the monitors. He’s given up privacy on his boat, yet shrugs off the notion of Big Brother watching his every move. “I’d rather have a camera than a person taking up a bunk,” he says. Our’s video monitoring system is part of a pilot project on a handful of boats. If the federal government finds that the video monitoring is accurate and reliable, more boats might adopt it.

The sector management system, Our says, has been a success so far. The hook fishermen have shown increased revenue, and the gill-net fishermen recorded an increase in income and a decrease in discards. And on June 25, New England fisheries’ governing body approved the creation of 17 new voluntary sectors to go into effect in May 2010. Further, the yearly quota system has also proven successful in protecting fish stocks. Last September, researchers who studied more than 11,000 fisheries reported in Science that a yearly quota system “halts, and even reverses, the global trend toward widespread [fisheries] collapse.” The National Oceanic and Atmospheric Administration has dedicated $16 million to implementing sectors in New England this year and has proposed an $18.6 million allocation for 2010. “This isn’t a silver bullet, but I think it’s going to be a lot better than what we’ve seen” for the last 15 years, says Baker.

Despite being at the forefront of what appears to be a path to a fisheries recovery, Our is nervous. He worries sector management systems won’t function as well for big draggers that sweep the ocean floor and haul up many species of fish. He worries that new sector participants will try to change the sector’s rules and that he could be shortchanged. He worries the government will continue to slash the amount of cod that fishermen are allowed to catch. He’s one of the successful ones, he acknowledges, but he worries about making a living.

Our leans against the side of his boat and shakes his head: “There’s no margin for error anymore.”

Cynthia Graber is a freelance writer in Somerville. Send comments to magazine@globe.com.

© Copyright 2009 Globe Newspaper Company.
See more stories from this issue.
Your comment is subject to the rules of our Posting Policy
This comment may appear on your public profile. Public Profile FAQ