A major retrospective of artist Robert Indiana's work will run through October 25 at the Farnsworth Art Museum in Rockland, Maine.

You're best known for your LOVE sculpture with the tilted "O." There have been so many reproductions of this iconic image that everyone seems to know it. What do you make of all this? There were 333 million Love stamps, and now the post office is ripping me off and producing Love clocks, Love dishes, cups, and saucers -- all made in China, of course. The Love clocks are fun, and I have a couple. They keep good time. I'm afraid I'm haunted by that image. It's been used badly for a long time.

Why did you move to an island off the coast of Maine in 1978? Because I had a lease in New York on the Bowery and my landlord decided I should move on. The only property I had was on Vinalhaven, which I had discovered in 1969. I'm here not because of the lobsters or the pine trees, but because of the Star of Hope. It's an old Odd Fellows lodge, the most prominent building on Main Street in Vinalhaven. It's a beautiful home, with my studio. I have many rooms. Already it's gotten a little crowded; things do accumulate. I'm a keeper.

Your first public commission, EAT, an 18-foot-tall depiction of the word, flashed over the 1964 World's Fair in New York. But people thought it signaled a restaurant, so the electric lights had to be turned off. This summer, the sculpture will hang over the Farnsworth's retrospective of your work. For 40 years I never saw it lit myself. And now I will. It's a spectacular location, on the roof of the museum, against the sky. "Eat" is one of my favorite words, because it is the last word my mother said before she died. All of my work is autobiographical in one way or another.

Do you think hungry people will again gravitate to this image? There is going to be a hot dog stand very nearby. That's just good luck. The Farnsworth has no restaurant.

What will visitors find surprising at the upcoming exhibition, "Robert Indiana and the Star of Hope"? It's the first official appearance of the HOPE sculpture, which made its first appearance with [Barack] Obama in Denver. This will be the real-world premiere of the subject of hope.

A long time ago you said that pop art is instant art. Do you want to elaborate? I said a lot of snappy things in those days, when I was young and foolish. Pop art was momentous in the 1960s. In the process, we buried abstract expressionism, which was never my favorite. Of course, it took years to create an electric EAT sign. It was not instant.

Which do you like more, letters or numbers? That's an interesting question. Until very recently I would have to say letters. But numbers keep cropping up and will be part of the show at the Farnsworth -- monumental number sculptures, all made out of Cor-Ten steel.

Why did you change your name from Robert Clark to Robert Indiana? Because in perusing the telephone book of any city in America, you will simply find there are too many Clarks. So, inspired by Tennessee Williams, I chose a better handle.

You're 80 years old. How much do you work? Work is very irregular now; I'm not a workaholic. I live on a beautiful island off the coast of Maine. One can get diverted. 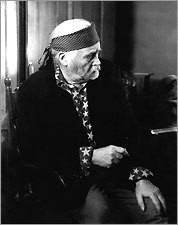 (Photo by Dennis Griggs) Artist Robert Indiana says "I'm not a workaholic. I live on a beautiful island off the coast of Maine. One can get diverted." 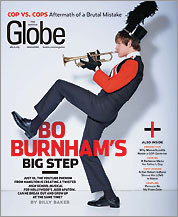