They're crazy for Vegas. But will they gamble on a second date? 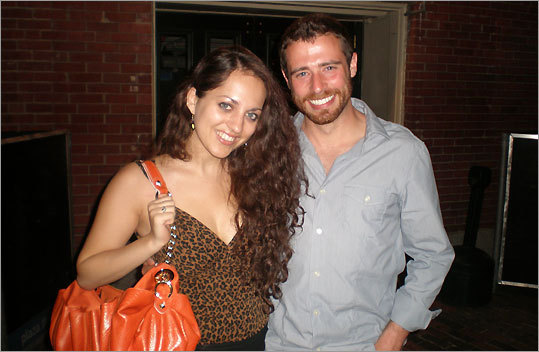 Kate McCulley and Mike Smoragiewicz hit it off on a blind date sponsored by The Boston Globe Magazine. (Photo from Kate McCulley)
June 14, 2009
Text size – +

Stranded on an island she'd want: A thick journal, her iPhone, an atlas for browsing

She's a catch because: She's well-read -- and will do anything on a dare.

He's a catch because: He loves life and has a carefree attitude.

His perfect Saturday includes: Reading, writing in his journal, drinks and dancing with friends

First Moves Kate: My co-workers helped me pick my outfit. They lobbied for me to wear nothing but pasties. I compromised and bought a new push-up bra on the way home. Couldn't hurt! I threw a solo Michael Jackson dance party in my apartment to ward off nerves.

Mike: I took a short nap, then drank a beer in the shower and got ready.

Kate: I got there first and took the more obscured seat at the table, so I'd have the extra few seconds to check him out.

Mike: Kate was dazzling. I greeted her with a big hug. She smelled really good, a huge plus. I appreciate a woman with a sense of style.

Kate: He was definitely cute, with a cool beard and a great smile.

Warming Up Mike: We established a playful rapport fairly quickly. We had plenty in common -- everything from a passion for traveling to our tastes in music.

Kate: He likes to read autobiographies, and I like to read memoirs. And we shared our love for both great and awful music. We're both close to our families.

Mike: She was upbeat, energetic, and had a good sense of humor. She had a joie de vivre, which I found sexy.

Kate: We both love Las Vegas. He likes to gamble, and I'm more into the club scene, but we're crazy about that city.

Mike: I may have fallen in love with Kate after we discussed each other's adventures in Las Vegas. I didn't think it was possible to find someone who enjoys Sin City as much as I do.

Kate: It wasn't a deal breaker, but I was shocked he doesn't vote. Politics are a huge part of my life. At least he doesn't listen to Limbaugh. When he started ribbing me about my questionable taste in dive bars, I couldn't help but laugh -- and I started thinking I might like this guy.

Upping the Ante Kate: After dinner, Mike asked if I felt like getting a drink and suggested the Beehive. Classy suggestion! I had planned on asking him the same thing.

Mike: It was Thursday night and still early -- of course I wanted to stay out later. Plus, we seemed to be enjoying each other's company.

Kate: I couldn't believe it was midnight. Mike needed to get to the T, and I was walking home, so we walked together as far as the station.

Mike: Kate gave me her business card, which I thought was dorky but cute at the same time. The night ended with a hug.

Kate: He texted me when I got home. I wasn't expecting that at all!

Second date? Likely. They've been texting, and both want to see where it goes.

GO ON A BLIND DATE. WE'LL PICK UP THE TAB.

To apply for Dinner with cupid, fill out an application at boston.com/magazine.