How one artist turns an invasive vine into whimsical, green furniture. 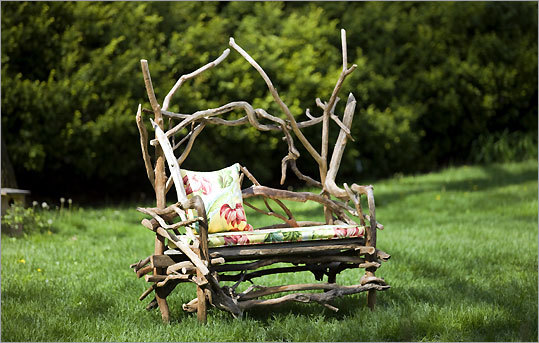 When Nancy Reilly is twisting and shaping a vine into a bench or an arbor, she takes her cues (as well as her materials) from nature. The result? "It has a whimsical look," she says, "as though created by elves."

Entangled, her company in Concord, is aptly named. Reilly acquires wood for her pieces the old-fashioned way, by walking deep into woods to harvest saplings and vines, sometimes climbing as high as 18 feet, and using a pole saw to cut higher. "I always have to remember not to cut the vine I climbed up on," she says, recalling the time she cut down her planned escape route and had to find another way down. Though she works with some young cherry, maple, and alder, many of her pieces are made from Oriental bittersweet, an invasive vine that she removes -- with the proper permits -- from Concord and Belmont conservation areas, as well as from private land. "Every time I cut down a big bittersweet vine that has encircled a tree,

I am saving that tree," says the trained biologist who also had a career as a nurse. It can take hours to find the right combinations of vines. She drags her finds to her old Dodge Durango.

Reilly, who is 51, came to furniture making recently, and she describes her first, self-taught endeavors as failures. "They became firewood," she reports. After an apprenticeship under Concord artist Jack DeMuth that she used to hone carpentry skills, she began experimenting with bittersweet. It is now central to her work. Reilly labors in her cellar most of the year and in her garage and out of doors in warmer months. Her home functions as her showroom, too; most of her work is designed for indoor use ($300 to $500 for lamps, $500 to $2,500 for tables) but some pieces are three-season, and she makes outdoor arbors ($1,000 to $3,000) and furniture to order.

Mindy Pollack-Fusi is a freelance writer. Send comments to designing@globe.com. 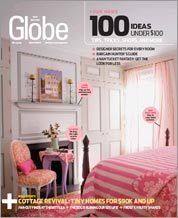