A Nantucket dream home filled with bright colors (and ideas). 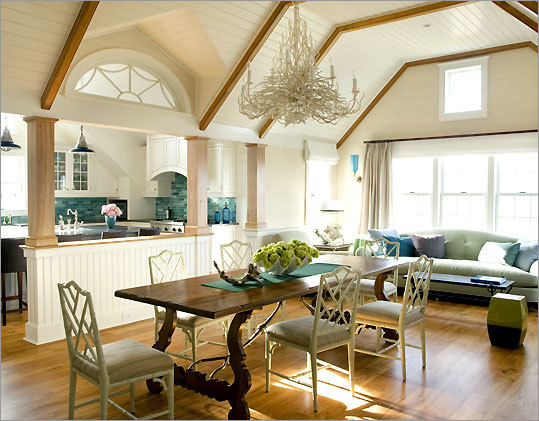 The airy, open-plan kitchen, dining, and sitting area is awash in watery blues and greens in this Nantucket home, which was decorated by Boston designer Frank Roop. (Photograph by Eric Roth)
By Marni Elyse Katz June 14, 2009
Text size – +

In the interiors world, terms like "vintage" and "craft" tend to conjure images of quirky, cobbled-together decors and homemade Martha Stewart-inspired tableaus. Not so for Boston designer Frank Roop. Though he works with out-of-this-world budgets and his taste is decidedly on the glam end of the scale, he manages to incorporate practical, cost-savvy techniques and pieces alongside luxe materials and high-end antiques.

Two years ago, Roop was hired by a Newton family with a new Nantucket home to decorate. Designed by architect Nathan McMullen of the Nantucket firm McMullen and Associates and constructed by Kris Perez's Falkon Building Co., it is a 5,000-square-foot neoclassic Shingle Style "upside down" -- meaning that the main living spaces and master suite are on the second floor (to take advantage of ocean views) and the three secondary bedrooms are on the ground level.

The interior scheme is as light and airy as its island setting and is infused with Roop's signature palette of seaside hues. He and his client share similar tastes. "When she came to my office for our design meeting, she was wearing all those watery colors," he says. "She basically had the storyboard on." A friend had recommended Roop to the homeowner, and after their meeting, she says, she thought he was just the person to design "a place where you can put your feet up -- but more stylish."

Stylish, indeed. The home's dining room is designed around an antique wooden table with carved curlicue legs that the client bought years ago at a Paris flea market. Roop added vintage faux bamboo chairs, newly lacquered in celery green and reupholstered in a subtle linen stripe. Above the table he hung a statement piece, a chandelier from the 1960s that resembles coral, giving a nod to the home's ocean setting without being corny.

Roop designs much of the furniture he uses (in this home, every upholstered piece) as well as the draperies and lampshades. And he calls on local artisans to produce his designs. If Roop didn't design a piece, chances are that it is vintage or antique -- sometimes updated, often left alone -- or something the homeowner had that Roop has used in a new way.

Natural elements add an earthy texture throughout the Nantucket house. There's a pair of 1950s driftwood lamps in the sitting room off the dining room, and the Swedish neoclassical-style table in the entry holds a casual arrangement of coral in a simple ceramic bowl. The wood floor and posts, which are made from reclaimed Chinese elm, also help warm the rooms. The homeowner debated whether to paint the posts and beams and is pleased with the decision to keep them natural because "the beautiful golden color adds a warm balance to all these cool colors," she says.

Materials like the wood beams and coral provide what Roop calls an "offbeat juxtaposition" to the sumptuous furnishings and accessories that are the cornerstones of his rooms, like his signature color-block draperies that require oodles of fabric and hours of cutting and stitching or the lampshade that tops the Danish chandelier in the game room, which is made out of at least 100 yards of cording and trimmed in suede.

Inspired by the family's penchant for travel to faraway lands, Roop also incorporated exotic notes, often with a Moorish bent. While he used a few actual artifacts from family trips, like fabric bought on a trip to Thailand that wound up on throw pillows and as an accent on an upholstered headboard, the most prominent examples are pieces he designed himself. The coffee table in the living room, its top inlaid with lustrous paua shell, is based on a Robsjohn-Gibbons stool that he owns. There is also a Moroccan star-shaped side table veneered in Tahitian mother of pearl that's like one the homeowner spotted in Roop's studio; she wanted one, too, so he had it made.

Perhaps the most glamorous spot in this mix of faraway-lands-meets-beach-house chic is in the bedroom Roop designed for the family's youngest daughter. To put an unused wall to work, Roop built a reading nook with a Moorish silhouette, outfitted with a cushion in an ethnic print. The cozy spot serves a clever design purpose, too. The daughter, to her mother's dismay, requested that her room be painted a super-bright citrus green. Roop was able to satisfy them both by using an over-the-top green inside the niche and a softer shade in the rest of the room. "Frank finds pieces and comes up with solutions that are creative," says the client. "He's got a great way of mixing it all up." ª 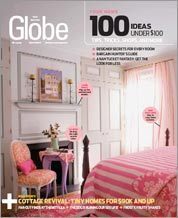