When you were growing up in Brockton, did people still call it "Shoe City"? Yes. There was a lot of pride in the city. I remember going into my father's factory, hearing the sounds of the machinery clicking away. The smell of leather is something I have great olfactory memories of. To this day, I have trouble buying a shoe that isn't leather.

Are you constantly looking at what people are wearing on their feet? I am. I'm always interested in how few women wear shoes that allow their toes enough room. I was the only person I knew growing up wearing British Brevitts. They were a brown tie shoe, with a leather upper and a crepe sole. I didn't have much arch support, so they were strongly suggested. Ironically, I was the least fashionable among my friends in terms of shoes.

Your dad, Merton Tarlow, started what's now the Fuller Craft Museum. My father was one of five appointed trustees to help build the Brockton Museum, as it was first called, on land donated by Daniel Field. It's beautifully situated on a little pond. It was designed after a Danish museum called Louisiana, with a lot of beautiful shingle work, a low wooden entry that brings you into a contemporary museum, and a lot of windows that overlook the pond. It's a little gem of a museum.

The idea of producing left and right shoes -- as opposed to straight -- and the mechanization of fixing uppers to soles were both instituted in Brockton. They were, and because the craftsmanship was so good, they won contracts from the War Department for an Army boot, which was made better than any other at the time. That really helped catapult Brockton to an international reputation.

The shoes in the show bring up so many ideas -- war, sex, gender issues. What did you learn about human nature by compiling the exhibition? I think there's a lot of thoughtful decision that goes into what one puts on one's feet. It is very much a cultural language. Whether it's the Jackson Pollock look or what Dale Chihuly wears to an opening, I just figured artists thought of their shoes as work appendages. But they're much more than that. They're still a statement of the identity of the individual.

What's the biggest surprise you found in the artwork you chose? The variety of materials the artists came up with was quite extraordinary. There's a wonderful blue jean pair, and an artist who collected lottery cards and made boots out of them. One artist collected over 400 bronzed baby shoes and has created a symphony of sounds you hear from early childhood.

It's the end of an era. The FootJoy factory, Brockton's last, just closed. What's interesting about the FootJoy golf shoe is that the golf pros weren't allowed to go into the clubhouses in the early days, even to sell their wares. Dick and Bill Tarlow, my dad's cousins, understood if you gave golf pros free shoes and were gracious to players -- the Arnold Palmers and the Gary Players -- they were eventually invited into the clubhouses to have their pro shops on the property. 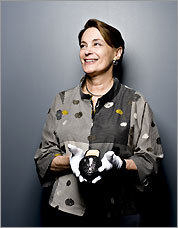 (Photo by Wiqan Ang) One artist "collected lottery cards and made boots out of them," says Wendy Tarlow Kaplan, curator of "The Perfect Fit: Shoes Tell Stories." 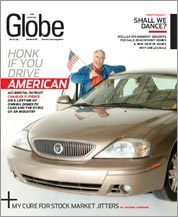