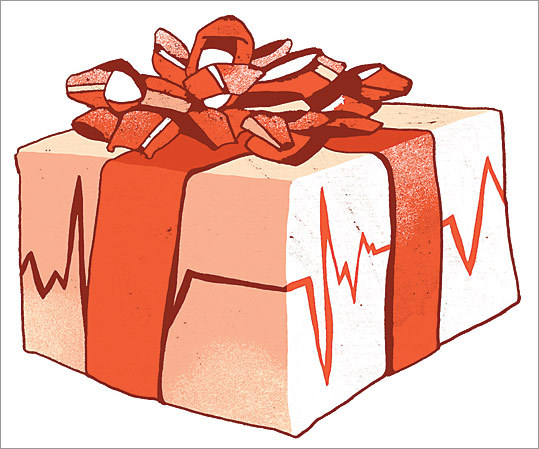 I never used to believe in love at first sight. But when my brother-in-law, Dick, met my twin sister, Peggy, in 1990, he was instantly smitten. She came in for an interview at his company, and he knew right away that she was the one for him. That was quite a feat given that Dick was in his late 30s, was a satisfied bachelor, and had given up on dreams of a family.

They got married three years later and had two children. They were happy, but there were challenges. Dick not only has Crohn's disease, a chronic, debilitating illness that causes severe abdominal pain and for which he's had two major surgeries, but he also has polycystic kidney disease, a hereditary condition that causes cysts to form on the kidneys, which ultimately fail.

For the first few years of marriage, Dick was relatively healthy. But soon after he began to suffer from continuous pain, became extremely weak, and was constantly sick. His doctor advised him that his kidneys had deteriorated to the point that he needed a transplant. His only other option was to go on dialysis, which was a three-day-a-week, four-hour-at-a-time commitment. Even in-home dialysis, which he had watched his father administer to his sick mother for years before she died, wasn't easy. It meant that he and Peggy couldn't go away for more than two days at a time and that roughly one-third of their waking moments would be dedicated to this life-saving machine -- not to mention the extreme exhaustion he would feel after each treatment.

A transplant was clearly the preferred choice. A kidney from a deceased donor meant a long waiting list. A kidney from a living friend or relative who was a match meant no wait, and the kidney lasts longer, too. In either case, there was no guarantee the transplant would be successful, since there's a risk of rejection. Finding a match from a willing donor would be a challenge.

When Peggy got tested to see if she was a match for Dick, I decided that if she wasn't, I would volunteer to be tested next. As much as I love Dick, I would have really been doing it for my twin and her children, so they could have Dick in their lives for as long as possible.

It turned out that Peggy was a match. And even though she would be losing one of her kidneys, be hospitalized for a week, and have a huge scar after the surgery, my twin didn't hesitate to offer. In her mind, she didn't have a choice -- her marriage vows really meant something to her.

The operation took place on February 8, 2001, their eighth wedding anniversary, though they didn't plan it that way. That was the first opening they could get. What Dick and Peggy did plan for was nearly a week of family members and friends cooking and caring for their children (ages 6 and 3 at the time), since they would both be in the hospital recovering.

On the day of the operation, I was terrified for Dick. I really didn't know if he would be OK, and I knew my niece and nephew were eagerly awaiting their parents' return home. But never once did I doubt that Peggy would be OK. She is as solid as they come, and it turns out her kidneys aren't so bad either.

After the operation, the surgeon printed out a picture of Peggy's removed kidney, shaped roughly like a heart, and gave it to her. She signed it and gave it to Dick in the hospital room down the hall as her anniversary card. "Happy anniversary," she said to him with a wry smile. "So what are you giving me?"

My brother-in-law couldn't give Peggy the gift of life, as she had given him. But since the transplant, he has given her eight more years of companionship (she already had his loyalty and his heart). He has had no rejection episodes, and he's gone from being frail and vulnerable to vibrant and optimistic. His Crohn's disease continues to plague him, but Peggy's kidney has helped them live a normal life.

It was as if Dick knew on the day that he met Peggy that she was the one for him -- that there was a greater force beyond their mutual attraction bringing these two people together. Whether divine intervention had anything to do with it, one thing is certain: Dick sure knew how to pick 'em.

Patty Lenz Bovie is a freelance writer in Boston and an aspiring children's book author. Send comments to coupling@globe.com.