The best career choice today is no choice at all. 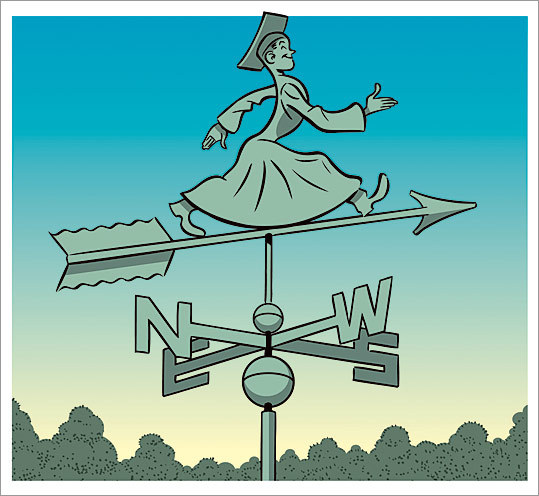 A word of advice to those of you trying to choose a career: Don't.

I know this counsel runs contrary to prevailing wisdom. We live in a world where those in college, even high school, are pummeled with the message that it is important to decide -- now -- what it is they wish to be. Indeed, perhaps not what they wish to be, but what they already are. Psychological tests and career counseling services such as the Keirsey Temperament Sorter, Career Maze, or the Motivational Appraisal of Personal Potential profess to reveal who you are and what job you should hold. (I take one and discover I'm "energetic, friendly, and outspoken." I take it again and I'm "quiet, reserved, and kind." My real personality? I cheat.) By these lights, careers are almost Calvinistic things (that would be the doctrine, not the cartoon), with our only challenge being to discover the nature of our predestination so that we might be happy the rest of our days.

Even if you don't buy this thinking (and I don't), the pressure to choose is ever-present. I see my kids going through it right now. It once was the case that colleges, liberal arts colleges in particular, were anti-careerist bastions that believed education was an end to itself, not merely a pathway to work. Today, students and parents don't seem to buy that as they once did, and instead want a return on their tuition that is measured in dollars, not brainpower. That explains why selecting a college major -- once merely an academic decision about concentrating on a particular field -- now is freighted with lifelong consequence. The College Majors Handbook With Real Career Paths and Payoffs is typical of this new attitude, promising readers it will reveal "which majors are the best investment, the job and salary prospects for specific majors, [and] the employment growth rates for particular majors." So much for the joys of intellectual self-discovery.

Yet, does picking a career early on really help, particularly if one understands a career to be more than those first few jobs after school and instead the sum total of one's working life? I think not.

People change -- arguably, more today than ever. The things we may like in our late teens and 20s might be vastly different a decade or two later. A century ago, lives were circumscribed by the limits of transportation, communication, and education. Today's smaller, interconnected world makes change omnipresent. You can see that in the way we work, flitting from job to job. (The US Bureau of Labor Statistics, for example, estimates that the youngest members of the baby boomer generation held an average of 10.8 jobs from ages 18 to 42. And that was before the recession.)

It's not only that we're changing jobs, but that jobs are changing, too. I look at a helpful career listing put out by the College Board. Many big categories, such as the environment and health technology, are almost brand new, encompassing technologies and desires that didn't exist a generation ago. A generation from now? Who knows? Meanwhile, long-established jobs are going away. As churchgoing diminishes, so, too, will the demand for ministers. And how about travel agents, TV repairmen, photo developers, secretaries, gas station attendants, farmers, and much of manufacturing? All are declining as well, due to changes in competition, technology, and tastes.

My point is simply this: When it comes to careers, you can't plan for the future. The best you can do is to prepare yourself for it. Part of doing that is to make sure you have the basic skills needed for any job: reading, writing, math, science, and, of course, a solid familiarity with computers. But this is the kind of stuff one learns in high school (or at least, should learn in high school). How about college? Higher ed should teach you to think, to solve complex problems, to communicate, to work with others, and to develop an open, flexible, and inquiring mind. Those are the qualities employers say they look for in job candidates, according to a recent survey by the National Association of Colleges and Employers, and, interestingly enough, those are exactly the qualities a good liberal arts education is supposed to deliver.

Those are also the same qualities that might make you a happier, more fulfilled person as well. It's an old-fashioned idea that is increasingly relevant today: Early on, it's better to expand one's options, not close them off.