My husband's new job is taking him to Washington, leaving the kids and me in Cambridge. Can I make this work? 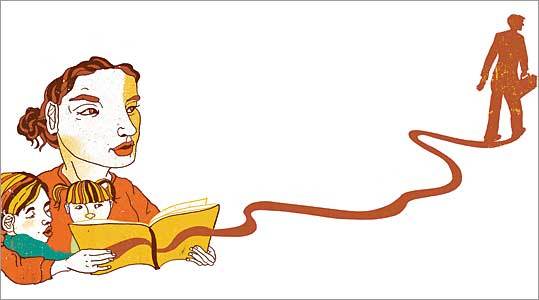 I spent the weekend crying or trying not to. I cried while driving. I cried at the gym. I cried in the frozen food aisle of the grocery store and after putting our kids to bed.

My husband, Michael, an economics professor at MIT, had been offered a job working for the Obama administration, and we'd come to the conclusion that (a) he should take the job (and make it his life's mission to play basketball with the president), and (b) our kids and I should stay in Cambridge, where, after 13 years of moving around the country, we've finally started to put down roots. Michael would come home every weekend, and we'd spend summers together in D.C. for the next one to two years. We'd made the decision after hours of discussion, and Michael had told me he wouldn't go if I didn't want him to. But how could I squelch his dream? He'd never squelched any of mine. I said yes, and thought I'd made my peace.

But a few days later, I found myself blubbering at the grocery store as I chucked embarrassing numbers of frozen pizzas into my shopping cart. For the next several days I had the queasy feeling of buyer's remorse. How was I going to take care of two young children all week without being medicated? Would I end up wanting to kick Michael in the shins every Friday night when he got home?

One night, as if on cue, I found a mass e-mail from Michelle Obama in my in-box. It was entitled, "Your call to service."

Et tu, Michelle? I thought, flipping off the screen.

Why was I so sad and angry?

I tried to remind myself of what several mom-friends had told me, in a way that suggested they were sharing a shameful secret. They had leaned in close, lowered their voices, and said, "It will probably be easier." I got it: Fewer chefs in the parental kitchen. Fewer size 13 shoes cluttering the front hallway. No suddenly appearing adult to pick food off my plate or ask why I was spending another night in my pajamas, watching three hours of CNN. The house sure will be clean, I'd think, smiling to myself. And quiet, I'd think, fighting back tears.

All this confusion was ricocheting around my gray matter the other night as I was putting our 3-year-old daughter, Jessie, to sleep in her new big-girl bed. I was lying next to her, rubbing her back as we listened to music and chatted about the relative merits of big-girl beds versus cribs.

Michael and our 6-year-old son, William, appeared in the doorway and, without prompting, climbed in. First, William wedged his beanpole body between Jessie and me, and then Michael bent his 6-foot-2 frame -- longer than the bed itself -- toward us, booming, "Make room for Papa!" William clasped his hands around my neck like an overeager prom date, and Jessie, smashed up against the guardrail, laughed as if she were being tickled. The only place for Michael to land was on top of us, which he did, his unshaven face scratching up against mine as William snort-laughed and Jessie yelled, "You're crushing me!"

In normal times, I'd tell Michael to stop. Jessie was tired, and if William doesn't sleep for 10 hours, the following morning is like a scene out of Friday the 13th. But in two weeks Michael would leave home for his new job, and each moment the four of us spent together felt precious.

That's when I realized why I'd been sobbing like a dumped teenager all weekend. I wasn't crying because I was worried about our future; I knew we could handle it. I was crying because I was suddenly aware of the fleeting nature of the here and now. Though I wasn't moving myself, I felt that sweet melancholy I always get before I leave a place. It's then that the colors of the neighborhood look brighter and I see things I've never noticed before, though I've walked the same route a thousand times. It seems it's always when you're about to lose something that you come to love it most.

And so, instead of yelling at Michael to stop, I lay there taking in the crush of my family all around me. I wanted to memorize the weight and warmth of our bodies. I wanted to hold onto the sublime chaos of that moment, so I could recall it later, when it was gone.

Katherine Ozment is a freelance writer living in Cambridge. Send comments to coupling@globe.com.