Don't laugh. Nicole Freedman is determined to make Boston the biking city for all other biking cities to emulate. 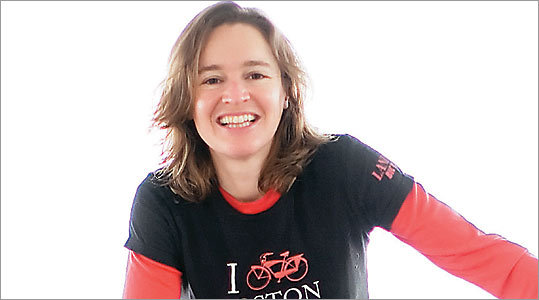 While all her friends in Wellesley were turning 16 and rushing off to get their driver's licenses, Nicole Freedman kept moving at her own, more leisurely, pace. On her bike. She ignored peer pressure and put off the one thing a typical teenager craves most. Only when she turned 18, just before heading off to MIT to study urban planning, did Freedman finally get her license. "I would bike everywhere," Freedman, now 36, says of her high school years. "I was not cool. You were supposed to drive."

Who's the cool one now? In a world where bikers are envied and gas-guzzling drivers are seen as global destroyers, Freedman was a couple of decades ahead of the pack when it came to reducing carbon footprints. Now she wants the pack to catch up to her. "It's so much faster to get around on a bike than any other mode of transportation," she says. "So much more so in Boston."

In her first year as Boston's bike czar (official title: director of bicycle programs), Freedman -- a former national road-race ace and Olympic cyclist who is also the coach of MIT's champion cycling team -- used her urban planning background and passion for the sport to begin transforming Boston. Roughly 5,000 riders participated in the Hub on Wheels ride in September, double the 2007 number. Two Bike Friday events drew 500 cyclists each. Some 250 new bike racks should be installed by year's end. Thirty companies were recognized as bike-friendly businesses.

And Boston's loudest critic took notice. After years of dubbing Boston the worst biking city in the country, Bicycling Magazine recently credited Mayor Tom Menino, who started biking himself this year ("I wish I did it 10 years ago," he says. "I love it."), for hiring Freedman and Freedman for turning the city's handlebars in a new direction. "The excitement she shows reflects on me," Menino says. "When she came up with the bike-share idea, she said, 'London has a good one. Why is London different from Boston? We're gonna do it in Boston.' " Bicycling Magazine specifically praised the new bike lane along Commonwealth Avenue, from Kenmore Square to the BU Bridge. "It's a small but important step in the right direction," the magazine wrote, "and unlike in years past it shows follow-through. Now, Boston, what's next?"

Good question. Freedman's first priority is to connect some of Boston's busiest roads with a network of bike lanes, including Dartmouth Street, Beacon Street, Huntington Avenue, the Back Bay stretch of Commonwealth Avenue, Washington Street, and Northampton Street. After that, she's got bigger dreams.

Freedman will take what she's learned from Montreal, Paris, Washington, and Portland, Oregon -- all cities with bike-sharing programs -- and start one in Boston that bests them all. "They did the trial and error," she says. "We can learn and leapfrog them." In Paris, 20,000 bikes are scattered throughout the city, and users are charged a small annual fee. Now 120,000 trips a day are being taken on those bikes. Could Boston see a similar transformation? Freedman thinks so, and she will start reviewing proposals in early 2009 with the hope of launching citywide bike sharing in the spring of 2010. Other goals include a place along the waterfront for downtown cyclists to shower and an arrangement with health clubs to open up their facilities to cyclists.

On a Friday morning in mid-November, the roads are slick from an early rain. Umbrellas are up. Winter coats are on. The folks inside Jamaica Plain's Ula Cafe are lining up for coffee or a warm popover. Just outside the door a black lab sits patiently, when into the parking lot, right behind a Honda CRV, wheels a helmeted Freedman. She dismounts with a huge smile, loosens the Velcro on her cycling gloves, and takes off her front tire, moving with the ease and athleticism you'd expect of someone who's biked around 200,000 miles in her young life.

"Our goal," she says, "is to reach a mass audience, not just the people who are already cycling." And she has a personal motivation, too. Five months before taking her job, Freedman's father, who dragged her out when she was little on bike rides he organized when he taught math at Boston University, was struck by a car and killed while walking through a parking lot in Wellesley. His memory drives her to make streets safer for all users.

When we're done talking, we go back into the wet and packed parking lot and see cars squeezing into spaces and crawling through intersections. It's hard to not feel a little envious as Freedman rides off past all of them.

Doug Most is the editor of the Globe Magazine. E-mail him at dmost@globe.com.