Unlike my dad, I am determined to be the kind of husband and father who shares all household duties. 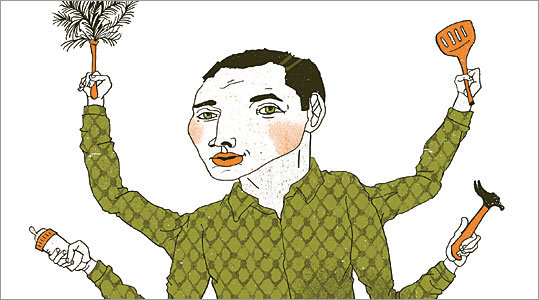 In this age of two-earner families and equal distribution of work, we men are expected to handle any and all tasks related to the house and children. Mowing the lawn and fixing leaking faucets go without saying, but I'm also required to cook meals, wash clothes, and take the kids on outings.

There are some tasks, though, that don't seem to jibe with my innate skills, and being assigned one of them feels unnervingly inappropriate. For example, the other day my wife sent me an e-mail regarding a scheduling conflict. Our kids needed their photos taken for a holiday greeting card, but on the logical day for that -- my wife's day off -- the only slot available was during our little one's six-month pediatrician appointment. This left the photo shoot to me: "Would you be available to do this on Friday?"

The answer to this kind of question is always "yes." Guys like me who frequent ballgames and rock concerts know it's important to demonstrate a blase air of detachment when asked to take on a responsibility that you feel completely unqualified for. "Perform brain surgery on the dog? Sure, honey. Is tonight good?"

But take the kids to have their picture taken? Chances were very high that I'd fail at this. Sure, I could get them there, but there was little hope we'd get shots even remotely close to the ideal images my wife was envisioning. If spit-up didn't ruin at least one outfit, then the crucial shot of them hugging would be impossible to achieve due to a meltdown or two.

On the other hand, succeeding at this task would solidify my image as a true jack-of-all-trades, similarly adept at running a table saw or juggling coloring books and poopy diapers. Contrast this with my father's role in the family. Though he was a wonderful, loving dad, his list of responsibilities was essentially one item long: Earn the dough. Because he had his first of several heart attacks early in life, it was my mother who not only did most of the child rearing and housecleaning while my father worked a desk job, but also tiled the floors, replaced the windows, and built partitions. It was a relationship that worked well for them, at least while they both were alive.

But when my mother died, my father discovered that he had no idea how to handle a whole set of household chores. I'm not by any means the world's neatest person, but I know how to run a washing machine. My father, on the other hand, had never managed the laundry or handled the grocery list and suddenly was called upon to perform these duties in his mid-60s. I'm pretty sure he had no idea a dryer lint trap even existed.

This was not going to be my fate. My wife and I had each secured four-day workweeks to equitably distribute household and earning responsibilities, having learned from our parents' generation that it is arguably a lot harder to stay home with the kids all week than it is to go to a job, where there is an ebb and flow to work cycles and you get conversations with actual adults. But our working relationship would only improve upon that of my parents if I was willing to get the kids' mug shots taken without whining about it.

When my wife and I arrived home from work that night, I casually asked for details on what she would be looking for in the photo.

"Oh God," she laughed. "I wanted to change her doctor appointment so you could take her to that."

My pride was wounded. "You think I'd put the baby in the wrong outfit or something," I said.

"No, I'd pick out the clothes for her," she replied, "but then I'd worry that you would put the shirt on backward." It's true I'd had trouble with this a few times. The buttons on my shirts are all in front, you see.

So maybe I'm not a true jack-of-all-trades. But then again, neither is my wife. The next time she fixes a hole in our ceiling will be the first, though I bet she'd be willing to try if I were laid up. The good news in all of this is that we pretty much see eye-to-eye on questions of who should handle which tasks. And if something were to happen to one of us, the other would be ready to step in with a wrench or an extra baby outfit.