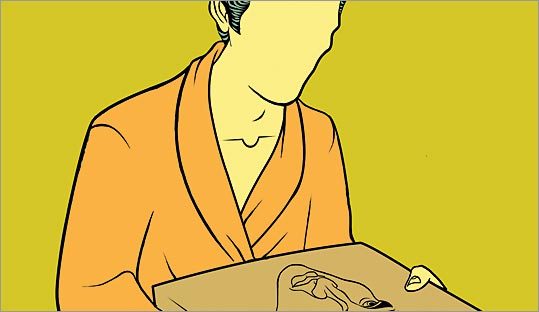 My Life as a Statistic

After I lost my job, I turned into merely a number. Then worse: I became a ghost.

I was watching the television news recently when it suddenly hit me that I was on it. Not that you'd have noticed.

I was one of the 10,080,000 counted as unemployed in October, placing me among 6.5 percent of the non-farm workforce, the highest jobless rate in 14 years. I wish the total had been more exact, say 10,080,321, so that I could be certain the head counters at the Bureau of Labor Statistics were really including me. But then I really don't need a statistician to validate what I already know every morning when I wake up.

Now, I'm not looking for any sympathy, although I still don't understand why the government didn't deem the magazine that laid me off too big to fail, as it did some financial institutions. After all, I actually made a product that people could enjoy; Wall Street just makes red ink. I'm sure that many of the unemployed are worse off than I am. Thanks to savings and my wife's job, we can still pay the bills.

It's more the psychic impact that's taking its toll: the feeling, most noticeable from 8 a.m. Monday to 5 p.m. Friday, that I'm on the outside, while everyone else -- or 93.5 percent of them, anyway -- is on the inside.

And not a single one of them is returning phone calls or e-mail.

When you're on the outside, you quickly forget what it's like to be on the inside. Instead of dreading a blinking light on your answering machine, you're looking forward to it. Instead of unread messages piling up in your in-box, they're trickling in. Even the Nigerian bankers have struck me from their list.

Initially I was a bit choosy about which job postings I'd respond to, blithely assuming that employers would be stampeding my e-mail box to enlist my services. Now I answer them all. I figure a bolt of lightning would find me more attractive than a prospective employer. Actually, I shouldn't say that. Several people have responded. But I think they're only teasing me. They get my hopes up with a phone call or even an interview, only to, well, forget I ever existed.

I suspect a different etiquette applies in the employment sphere. You know how some of the gentlest people turn into obstinate bullies when they get behind the wheel? I think something like that happens to people when they place "help wanted" ads. I have no doubt that elsewhere in their lives they are most considerate, promptly sending thank you notes for gifts, answering RSVP requests, and responding to the PBS pledge notices.

But something must shut down in their brains when it comes to acknowledging a resume or informing a job candidate the outcome of the third round of interviews. It makes me wonder how they got their jobs; perhaps it was through something akin to the Immaculate Conception.

Being on the outside does have its bonuses. For one, I'm no longer a job snob. I used to scoff when my wife talked about quitting a decent-paying position with benefits to work in a bookstore. Now I look with envy at those folks who get paid for advising other people about what to read (although I do realize that it would probably take them more than two hours' pay to afford a hard-cover, even with an employee discount).

Then there's my postman, Steve, whom I'd never have gotten to know if I weren't unemployed. He spends his days walking up and down tree-lined roads (and, believe it or not, his vacations involve hiking). He doesn't have to worry about what to wear. And he'd better not be bringing any work home. Yes, I know about that rain, hail, sleet, and snow stuff, but who thinks about that on a lovely day?

Speaking of lovely days, I can imagine you people on the inside saying, "Gee, what's he complaining about? He can go out and play!" Indeed, I try to tell myself that. But then Guilt interrupts, scolding: "You don't deserve to relax until you do some work!"

On rare occasions, I do muster the courage to defy Guilt to, say, take a walk around the Brookline Reservoir. But then I find myself rushing home. After all, my answering machine might be blinking.

Freelance writer Steve Maas can be reached at steve@stevenmaas.com. Not that he's expecting to hear from you.