A Room of His Own

When choosing decor for his backyard barn, photographer Eric Roth has only one rule: Keep it fun. 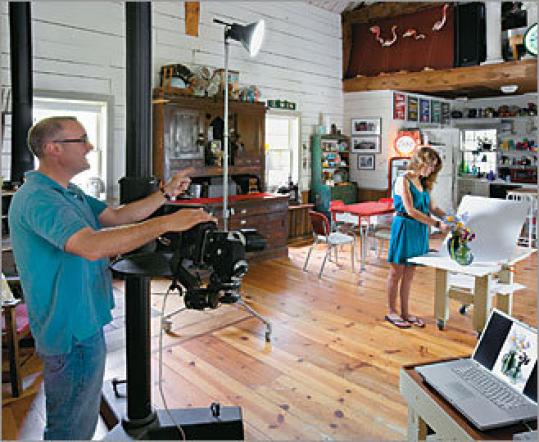 Eric Roth often relies on his daughter Maddy to help him shoot when she’s home from the University of Connecticut. (Photograph by Eric Roth)
By Marni Elyse Katz November 30, 2008
Text size – +

Forget hay and horses. Stepping into photographer Eric Roth's Topsfield barn is like stepping into a kitschy stage set. (Hold the glamour, bring on the down-home style.) Everywhere you look in Roth's studio/office space is another quirky ode to the past. Sitting next to a groovy red table and chair set found in a junk store in New Hampshire is a retro Esso gas pump, picked up at the Topsfield Antiques Market, which functions as a nightlight, albeit a really big one. The colorful posters that hang above the bathroom doorway are signs from the F&T, his grandfather's Kendall Square diner that was in business for 50 years before they built the T where it once sat. And don't miss the old Speedaway sled, a keepsake from Roth's childhood in Newton.

Roth, a self-described "photo geek" (who often shoots for this very column) and father of two teenage daughters, has been happily ensconced in the 200-year-old-plus clapboard, weather-vane-topped barn for 12 years. But converting the barn into a comfortable office/studio space took time. Twenty years ago, when Roth first bought his home, the barn out back had a concrete floor, no insulation, and a sagging roof, and functioned as little more than a ramshackle storage shed. "In its heyday," Roth says, "it would have had five bays, with hay and feed areas upstairs."

His first order of business was replacing the leaky, uninsulated roof, adding skylights, and removing two-fifths of the second floor to open up the ceilings. He was out shooting on the day that contractors tore out part of the second floor. When he got home and looked up at the soaring ceilings, with the sun pouring in, he was so moved that he cried. They were tears of joy, he says; he was overwhelmed by how much the space felt like a church or synagogue. The original concrete floor was also in bad shape, not to mention cold and uncomfortable. He decided that he wanted a wide plank pine floor to give the barn a cottage feel, but he needed to stick to a budget. So every time the boards went on sale at a nearby lumber shop, Roth bought up all they had. After a year, he finally had enough to cover all 2,400 square feet.

The challenge over the years has been finding space to store Roth's numerous possessions, from cameras and computers to all sorts of collections. "Having a barn is a license to collect junk," he says, "and I have an endless stream." Before moving in his equipment more than a decade ago, he got rid of a lot of extraneous items -- and he continues to do so. Still, he keeps collecting. There's the informal assemblage of tin robots, the cabinet full of cameras, most of which don't work, and a pile of old alarm clocks on display in a mammoth armoire-type piece.

Despite his desire to cut the clutter, there are numerous treasures he says he'll never part with. The 1910 Glenwood cookstove, acquired on from a guy in the next town over, provides much-needed additional heat on cold winter days. And he adores an enormous section of wood cabinetry salvaged from a Catholic church by a friend who works in historic preservation; extra-wide drawers that once held church linens now store Roth's photos. He admits, however, that a lot of the other stuff in the drawers could be tossed -- pieces of fabric, teacups and candles, fluorescent yellow and orange Halloween votives. He walks me over to a handsome polished wood storage cabinet that sits a few feet away. Once used by a dentist, it's an antique that's ideal for storing lens caps, filters and such, he says. "Sometimes," he adds, "I really do need something out of this one."

Light fixtures and architectural details have similar provenances. The pendant drum lights on the first floor hail from a former Topsfield church. Also from a church is the cobalt blue and brick red stained-glass interior window, purchased in Montpelier. A stained-glass window in the bathroom was purchased at a friend's antique shop in Ipswich.

While the space functions as his studio, it's also a place where he invites family and friends to spend time with him. That retro red table in the kitchen has been the site of many celebrations, from birthday parties to Passover Seders. As was Roth's intention, this isn't just a man cave. It's a gathering place. And although it is the center of Roth's business, the place he goes to work, it's also his escape. Roth says simply, "The barn's my best friend."

Marni Elyse Katz is a writer in Boston. Send comments to designing@globe.com.