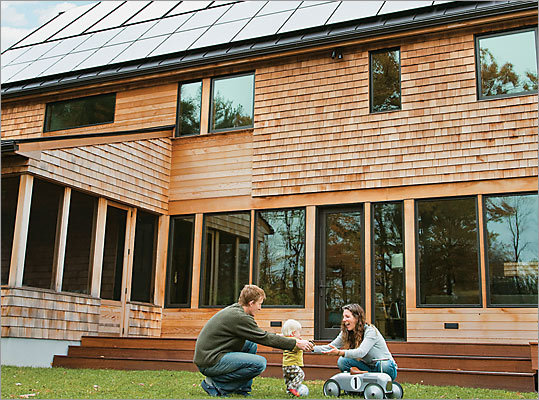 unplugged Solar panels on the roof give the home a futuristic look. (Photograph by Eric Roth)

After a couple built an off-the-grid house in Peterborough, New Hampshire, they fell for something more than solar-powered batteries -- family.

When Chris Anderson and Anna Von Mertens started dating in San Francisco in 1995, she says, "I came with a clause: 'By the way, we'll be moving back to New Hampshire someday.' " Though Von Mertens -- like Anderson -- had moved to California right after graduating from college, she had always felt as if she belonged on the East Coast. "California was always a little too far for me," she says.

Anderson, by contrast, had had a somewhat itinerant childhood. Because his stepfather worked for the State Department, his family moved a lot -- he has lived in Chile, Egypt, and several US states, and he spent summers in Alaska after his father moved there when Anderson was 3.

By the time Anderson and Von Mertens wed in Peterborough, New Hampshire, in 2001, they had formulated what they called "The Plan" -- to build a home in Peterborough, where her parents live, before starting a family.

Von Mertens's parents gave the couple a 14-acre lot carved out of 187 acres of conservation land that her mother and an anonymous donor had set aside years ago. Shortly after they started building the house, Von Mertens became pregnant with their daughter, Hayden, now 14 months old. "We really wanted to raise our children surrounded by nature," Von Mertens says of their plans for an expanded family. "It's so different from their experience of nature being some sort of urban park."

Not only will the couple's children be surrounded by nature, but they'll also be enveloped in family. Von Mertens's brother, Tod, and his wife, Jaylon, and their two children moved back to Peterborough from Seattle on the same night the Anderson-Von Mertens family came to live in their newly completed house. And they live just 3 miles down the road. "The kids see each other a lot," Von Mertens says, "and it's nice, because you can have these little moments with your family. Jaylon and I go for walks with the strollers on the country roads, or she'll stop by to drop off a pair of shoes -- instead of big holidays-only events."

But the house Anderson and Von Mertens, both 35, built is far from traditional: It's off the grid. To a lot of people, those words still conjure images of hardship and deprivation. But living independent of public utilities by virtue of an independent power source is becoming more and more common. And, judging by this house, it's increasingly stylish as well.

Anderson -- who is chief operating officer of Borrego Solar Systems, a California-based company that opened an office in Lowell last year -- says he was motivated in part to build off the grid because he "wanted to walk the talk."

"We're not suffering at all," he says. "We feel it's more of a luxury." The house, indeed, is luxurious in its simplicity. It has everything a modern family could want: a large living/dining area that's open to the contemporary kitchen, a media room with flat-screen TV and state-of-the-art stereo system, a cozy sunroom overlooking the wooded yard, a large two-car garage (sheltering a Honda hybrid, of course), and four bedrooms, including a master suite with a soaking tub that looks out to the soaring Wapack Range on the horizon.

It also has a few items most houses lack, including a chicken coop, 49 solar panels on the roof, two tanks totaling 2,000 gallons that feed 80-degree water through the radiant-heat flooring, 24 heavy-duty solar-powered batteries that kick in when the sun goes down, and a wood-pellet boiler that acts as an adjunct and heats water for showering and laundry. The couple acknowledge that they went above and beyond what was needed, but, says Von Mertens, a textile artist, "we wanted to be uber-efficient." Those passive-solar windows that bring the panoramic mountain range into view, for example, are triple-paned, which cost the couple about $8,000 more than double-paned would have; the home's framing is Forest Stewardship Council certified. "We don't get any benefit from that except the knowledge that we supported sustainable forestry," Von Mertens says. "Basically, we gave a $10,000 donation to sustainable forestry."

They also used as much wood as possible from the pine stand that was cleared from the site -- for flooring, subflooring, and garage walls, as well as for the built-in cabinetry in the master's walk-in closet and for much of the furniture, which Von Mertens's father built by hand. Poured-concrete floors not only look cool but are energy-efficient, since they absorb the sunlight streaming in, and items such as the eight colorful Eames chairs that dot the dining room are "recycled" finds.

Though, in the end, the house cost about $600,000 to build -- perhaps $160,000 more than an equivalent on-the-grid house, Anderson guesses -- the difference will more than pay for itself over the life of the home. But for Von Mertens and Anderson, the emotional value they get from living off the grid is priceless.

Elizabeth Gehrman writes our On the Block column. Send comments to magazine@globe.com.