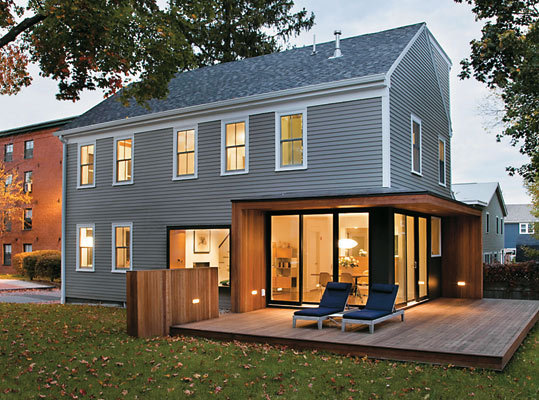 A young family from Oregon moves to Newburyport and injects West Coast cool into a run-down workers’ cottage. (Photograph by Eric Roth)
Designing

A young family from Oregon moves to Newburyport and injects West Coast cool into a run-down workers' cottage.

Mars, as Oz and North Ultman refer to their Lego-filled playroom, has certain qualities that distinguish it from any other room in the galaxy. For one, the loftlike space affords the brothers -- 8 and 5, respectively -- an aerial view into their shared bedroom on the floor below. From a large window, they can spy the tops of neighboring buildings and the Merrimack River. And from her adjoining office space, mother Suzy can easily keep an eye on them, even join in now and again. To her, it's these connections -- between rooms and family members -- that make the space truly special.

"There's something about having things be open that makes a family feel joined and makes everybody feel more comfortable," Ultman says.

Creating a fun, warm environment for their sons was a top priority when Suzy and Adam Ultman began their home renovation a little over a year ago. But the couple, both 38, wanted a house that would suit their own design tastes as well. They had loved their previous house -- a 1970s modern in Portland, Oregon. When they moved to Massachusetts in 2007 for Adam's job as a design director for Converse, Suzy Ultman says they knew it would be tough to find a similar home here.

"We really fell in love with Newburyport," she says, explaining how the area's natural beauty reminded them of Portland. "So we decided to buy a really old house and gut it and try and really infuse what we loved about our mid-century house into it." Ultman, an energetic young mom and illustrator who is passionate about the environment, also wanted to incorporate as many green building materials and natural colors as possible.

The house the Ultmans found, originally a cottage for workers at the James Steam Mill across the street, is at least 100 years old by their estimation. Architect Dan Hisel, whom the couple hired to head up the renovation, immediately appreciated what he calls the structure's "iconic house shape." "It's almost like a Monopoly house in the sense that it has such a simple elevation and clean lines," he says.

The inside was another story. The home had been a rental property for a number of years and had fallen into disrepair. "I think there were probably four different materials on the floors of the first floor," Hisel remembers. "It was a seriously challenged house."

His design preserved the exterior simplicity of the house, so that it exists in harmony with its neighbors, while completely transforming the interior to accommodate the Ultmans' dream to live in open, connected spaces that would bring the outdoors in.

The first floor consists essentially of a living room in the front of the house, a great room that encompasses a sitting area and a dining space, and a kitchen and mudroom. A double-sided fireplace visually divides the living room from the dining and sitting areas; a desk in the kitchen -- which functions as another office for Ultman, when she needs to be downstairs with the kids -- creates a bit of separation between that room and the dining area. Ultman says she asked Hisel to design the desk at counter height. "If I sit down, the kids need me, but if I'm standing, they usually give me space," she says with a laugh.

Instead of adding on to the house, Hisel and the Ultmans decided to use the attic space for the playroom and office/guest bedroom. Opening the ceiling in the boys' bedroom connected it to the third-floor area and, indeed, makes the whole house feel more linked -- and much larger than its 2,300 square feet.

Clever touches, like a custom-designed window seat in the first-floor sitting area, add both seating and visual interest to a space-challenged room. Built by Somerville-based company Architectural Openings, the seat is made of Plyboo, a green building material that's also used in some of the home's kitchen cabinetry. Although not all the materials used in the home are eco-friendly, Hisel says the very act of renovating this home -- which was near tear-down state -- was a green move.

Basic changes, like adding insulation and installing new windows, cut down on energy waste. A mahogany deck built off the dining space has a south-facing overhang, a passive-solar feature that admits sunlight into the house in winter but blocks it when the sun is overhead in summer. Oversized sliding-glass doors from the house onto the deck, like the other large windows in the house, allow for a dialogue between the outside and inside, the effect the Ultmans strived for. Suzy Ultman feels they've achieved it on nights when she's singing her two young boys to sleep, and they can look up through windows and feel as if they're right under the stars.

Deblina Chakraborty is a writer in Boston. Send comments to designing@globe.com.