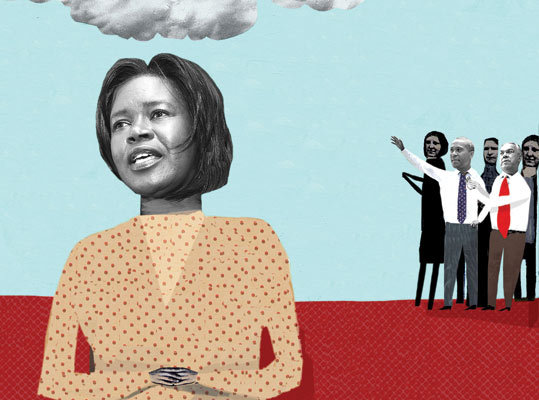 It's time politicians realized that when they back a colleague, it speaks volumes -- about their own character.

(Editor's Note: For an essay in the Boston Globe magazine that will appear this Sunday, freelancer writer (and former Boston city councilor) Tom Keane exchanged emails about political endorsements in the wake of Dianne Wilkerson's arrest last month. On Oct. 31, Chuck Turner wrote Keane a lengthy response about why he endorsed Wilkerson despite years of trangressions. Portions of that interview appear in this essay.)

What is one to make of the slew of politicians who endorsed now-disgraced state Senator Dianne Wilkerson in September's Democratic primary? An 18-month FBI investigation found Wilkerson allegedly taking cash bribes in exchange for political favors.

But well before then it was obvious something was amiss. Seemingly the entire political establishment -- the governor, Boston's mayor, the leaders of the House and Senate, six state reps, and six Boston city councilors -- backed Wilkerson against challenger Sonia Chang-Diaz. Yet at the time they endorsed her, Wilkerson had compiled quite the sordid record. In 1987, she defaulted on her federal student loans. In 1997, she was under house arrest for not paying $51,000 in income taxes. In 1998, she spent 30 days at a halfway house for violating probation. In 2001, the state Ethics Commission fined her $1,000 for lobbying for the Boston Bank of Commerce, which had paid her $20,000 as a "consultant." In 2005, she allegedly perjured herself at a hearing at the Suffolk Superior Court (the matter is still pending). And this year, the attorney general fined her $10,000 for various campaign violations.

Shouldn't that have been enough? Indeed, Chang-Diaz's campaign against Wilkerson was all about these transgressions (the two had no fundamental ideological or policy disagreements), and ultimately a majority of voters in the district chose Chang-Diaz, a clear message that they found Wilkerson ethically unworthy for office.

But our political leaders did not have the same qualms, and one has to wonder why. I asked. Most ignored me. But a number responded, and their answers are revealing. City Councilor Michael Ross said he endorsed Wilkerson "because of the leadership role she played in Boston's black community." State Representative Martin Walsh said, "We had worked on many issues together." She "consistently helped the people of her district," Councilor John Connolly said.

In other words, it was sufficient that she did her job. Ethical failings and lawbreaking were largely irrelevant. She "has always been a staunch advocate for her community and, in my opinion, before these recent charges, that is what mattered most," Councilor Stephen Murphy told me. "When it comes to deeply moral failings -- at a human level -- it is not for me to judge," said at-large Councilor Sam Yoon. Another city councilor, Chuck Turner, offered up the everyone-does-it defense. "From an ethical standpoint," he said, "I don't think the vast majority of Congress should be allowed to sit." (Turner went on to lecture me about my naivete: "I'm surprised, Tom. I didn't think you were in denial of the reality of the moral depravity of this country.")

I guess I understand what's really going on. Governor Deval Patrick told reporters he endorsed Wilkerson because she had earlier supported him. That's the way it works. Little gets done in politics without the support of one's colleagues, and it becomes quite natural to do whatever is needed to gain their good will. Endorsements are an easy, mostly risk-free way to do this.

As I said, I understand it. That doesn't mean I accept it. There is another way to view endorsements, one with which I think most regular citizens would agree: as an affirmative statement by one politician about the character and ethics of those who serve in public office. Remember last January, when Senator Ted Kennedy endorsed Barack Obama, praising his "extraordinary gifts of leadership and character"? That was not mere logrolling done to curry favor. It was Kennedy's personal vouchsafing of Obama's moral fiber.

Contrast that with those recent endorsements of Wilkerson. Perhaps, by endorsing her, local pols were telling us -- a la Chuck Turner -- that all politicians are corrupt. Or perhaps they were saying it didn't matter. Either way, they communicated a distressing message, one that breeds public cynicism.

I do have this Pollyannish belief that politics is a higher calling. But it's hard to keep the faith when our politicians don't seem to believe it themselves. State Representative Linda Dorcena Forry is chastened. "This experience will certainly serve as a lesson to me in the future," she said. One hopes that, post-Wilkerson, the rest learn as well: The endorsements they make say far more about themselves than they do of the candidates they back.