Remember when 19-0 was so close you could taste it? A New York Giants fan treks the dirt roads to a one-room shack in an impoverished Nicaraguan village in search of a painful piece of Super Bowl memorabilia for Patriots fans everywhere. 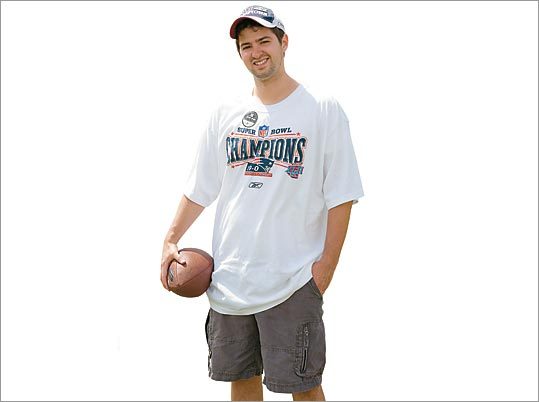 IN A PERFECT WORLD, the hat would be sitting on Tom Brady's mantel and the woman holding the hat in an impoverished and remote village in Central America would still have her teeth.

But there is perfect and there is near perfect, and the slightest difference explains how I came to be standing in a puddle of mud, carefully balancing a 75-pound purple backpack on my shoulders in San Gregorio, Nicaragua, urging my new best friend Hannibal to assure the toothless woman that we were serious about giving her actual money for this hat.

When the New York Giants upset the New England Patriots 17-14 in Super Bowl XLII, the loss kept the Patriots from finishing the season a perfect 19-0. With the game's outcome in question until the final play, the NFL had both Giants and Patriots Super Bowl champions apparel ready on the field for the victorious team's players, leaving nothing to chance when cameras captured the first celebratory shots. Reebok and the NFL added an extra touch to the Patriots' championship shirts, a testament to the team's storied place in history. A "19-0 Perfect Season" patch was sewn onto the hats, and the T-shirts carried the same message.

So when the 18-1 Patriots failed to live up to Reebok's prophecy, World Vision, a Christian humanitarian organization, arranged to ship the memorabilia to people in need in nearly inaccessible places, ensuring that these treasured items would not see the light of day back in the States.

But with a trip to Panama and Costa Rica already in the offing, Ilan, my roommate at Boston University, and I, both lifelong Giants fans, decided that dipping into Nicaragua for a few days to try and get our hands on the rare collectors' items was necessary addition to our itinerary. And a way for us to stick it one last time to our friends in Boston who were still crying over the Super Bowl.

OUR ADVENTURE started in Managua. For a dollar each, we ducked into microbus for the one-hour drive to Diriamba, the town that had been reported as the destination for the Patriots gear. They packed 17 riders into 14 seats, with one generous traveler angling his body out of the window. Squished against a grimy window in the back row, I jockeyed for leg space while squabbling with Ilan about the absurdity of our trek.

"We don't speak a lick of Spanish," I yelled to him over the engine noise. "How are we going to do this without an interpreter?"

"Do you expect all the villagers to just walk around wearing these shirts and hats?" I said.

The teenager wedged between us shot me a perplexed look, probably cursing the karma that got him sandwiched between two bombastic schmoes from New Jersey.

As if on cue, our fellow passengers turned around in unison, scrutinizing us. They became animated and argumentative. We had no idea what they were saying, but it became clear that money was at the root of it. The man sitting in front of Ilan turned around and told him that we had to pay an extra dollar for our massive backpacks.

It turned out that Lawrence was an oral surgeon in training who was born in Nicaragua and had become a fan of American football while living in New Orleans and Tampa. We told him about our quest for the Patriots hats and shirts that were sent to Diriamba. He said we were crazy, but offered to take us to his in-laws' pharmacy in Diriamba, where someone might be able to help. Once there, we humped our backpacks through the streets, searching for signs of Patriots perfection on every corner. Lawrence's wife seemed confused by her husband's bizarre posse, but welcomed us into her parents' store. They made several calls on our behalf, but no one seemed to know about World Vision's gift.

Ilan and Lawrence disappeared into a back room to scan the Internet for more clues while I waited with the bags. Suddenly, Ilan rushed into the room.

"We know where it is," he said, grabbing his backpack.

Ilan and Lawrence had watched a video imbedded in a Time.com article that mentioned World Vision taking the hats and shirts to San Gregorio, 8 kilometers away. We navigated our way to the bus station.

As our microbus bumped and slid for 45 minutes along the mucky road connecting Diriamba and San Gregorio, I caught a glimpse of a man trudging up the road wearing a blue and white Patriots Super Bowl Champions hat. We were on our way.

San Gregorio's mud-soaked road farted underneath our sinking feet as a flock of teenage boys descended upon us like vultures encircling a carcass. We were scouring the area trying to find someone - anyone - who spoke English when we met Jose Samuels.

Standing on his porch, Samuels introduced himself in broken English, hoping to understand why two disoriented foreigners were pointing to kids' shirts while repeatedly pantomiming a football-like throw. He welcomed us into his one-room home and offered us coffee. I began explaining the purpose of our mission. He looked confused.

While Ilan waited with the bags, I followed Jose down San Gregorio's main road. We turned up a trail in time to meet a cow herd lumbering toward us. Jose never fl inched, leading me to a patio where a group of women were settling into their creaky rocking chairs. Jose disappeared into the dilapidated dwelling.

When he returned, 6-year-old Luna was by his side. Luna took one look at me and understood why her uncle had brought her outside.

"What are you looking for?" she asked me in perfect, unaccented English.

"Where did you learn English?" I replied.

Luna explained she was from Morristown, New Jersey, just 15 minutes from my own home. She and her mother were visiting family in San Gregorio. Luna got excited at the mention of the New York Giants but didn't know where I could find the shirts, nor did any of her relatives.

I RETURNED WITH JOSE to his home, where Ilan was sitting with the Samuels family. Ilan and I lugged our bags out of Jose's house and found some villagers who thought that the shirts were available at the church. We were nearing the battered church's doorway when a grungy young man on horseback approached us.

The guy on the horse pointed to a slight man in sagging blue jeans and a stained polo shirt, who introduced himself in clear English as Hannibal. According to Hannibal, he had fled Nicaragua in the '80s, sneaking into the United States after the Sandinista National Liberation Front ousted the Somoza regime. Hannibal told us that he had gotten married in Los Angeles, where his wife and children still lived, but that he was deported several years ago when his lawyer failed to renew his immigration documents.

He offered to help us, and soon we were accosting villager after villager, receiving new information and hot leads each time. We snaked our way through the back roads and happened upon a young woman sitting at a rectangular entry carved into a chicken-wire fortress. Hannibal spoke to her, then waved Ilan and me inside, where I saw people standing around a circular pavilion, looking into a dirt pit enclosed by long wooden boards, and I heard a frantic cacophony of clawing, clucking, and banging. Only then did I realize that I was standing among roosters being trained for cockfights.

Walking past the furious birds, we made our way to a counter where a teenage girl was selling beer. Jessica told Hannibal she used to have a Patriots shirt but didn't know where she had put it. Besides, she said, why would we want it? The XXL-sized shirts were too big for humans.

I glanced at my watch. It was 4:30 p.m. Hannibal told me the final bus out of San Gregorio left at 5.

Hannibal quickly led us to a row of one-room hovels, where we met a wrinkled woman sitting outside in a mint-green dress and a white apron. Her warm smile revealed a mouth lacking teeth. Hannibal and the woman talked for a few minutes. I reminded Hannibal that we were willing to pay money for a hat or shirt. The woman entered her shack and returned with a black plastic bag.

The woman couldn't believe we were willing to pay money for these things. We gave her $5, a sizable amount in the area, and handed Hannibal an equal finder's fee before sprinting down the road as the bus began to gain speed out of town. The driver slowed to let us on.

On the bus, I studied the "19-0 Perfect Season" hat and pointed out to Ilan the line etched into the red and blue Velcro strap: "WE WANTED IT MORE."

Not as much as we did.

Aaron Kaplowitz is a freelance writer in New Jersey. Send comments to magazine@globe.com.