At 275 years old, Yo-Yo Ma's Domenico Montagnana cello is still in its prime. Jeremy Eichler gets the master to muse about his instrument. 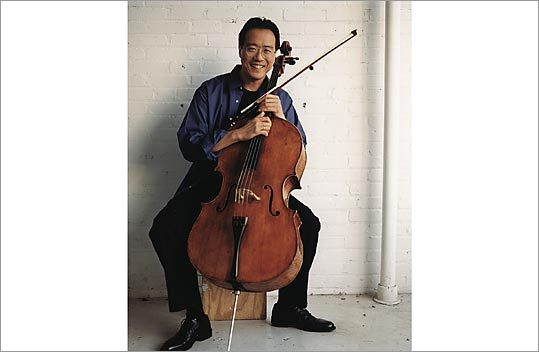 Even while Yo-Yo Mais playing on a grand and majestic Italian cello, worth millions and with a distinguished pedigree, secretly he is hoping you won't notice it at all. "My personal goal is to transcend the instrument," he says, so that when you listen, it's about the music.

Of course, if you do want to transcend your instrument, it helps to have access to a really, really good one. Or two. When Ma tears into the Lalo Cello Concerto with the Boston Symphony Orchestra at Tanglewood this afternoon, he'll be playing on a cello made in 1733 by the Venetian master luthier Domenico Montagnana that is valued at about $2.5 million. He also performs on the so-called Davidoff Stradivarius. Named for a former owner, it was also played by the legendary British cellist Jacqueline du Pre (the instrument is now owned by a group of investors; the Montagnana belongs to Ma). He calls the Strad "innately gorgeous," with an extremely refined sound, but says it is not as forceful or versatile as the Montagnana, which he can use for rough-and-tumble modern works as well as pieces from the standard cello repertoire. "You can ask a lot of it and it keeps giving," Ma says.

The Montagnana's secret weapon is its powerhouse C string, the lowest-pitched of the instrument's four strings. Its sound and color are what attracted Ma to begin with. He grew up with two violinists and a soprano in his family, so he was "heavily into hearing treble," he says. Ma chose the Montagnana in the 1980s precisely because its strength was its bass.

That said, a bit more fetishizing of his instrument might have come in handy that infamous fall day in 1999 when Ma stepped out of a taxi on 55th Street in Manhattan and left the Montagnana in the car's trunk. Some three hours later, after much hand-wringing and an intensive search effort that involved the New York City Police Department, the cello was safely recovered in Queens - in the trunk of the taxi. "I was just really absent-minded that day," Ma says. "The sad thing is that when my daughter loses something, and I look at her and say, 'You can't do that,' she looks at me and says, 'I come by it honestly.' And there's very little I can say!"