How a gun-hating family from Billerica produced an Olympic shooter. 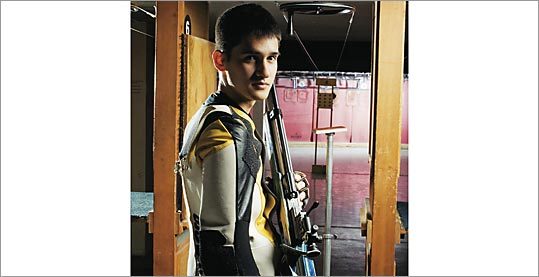 Stephen Scherer fired his final shot at the Olympic trials in March, lowered his rifle, and smiled. There was no fist pumping, no chest thumping when he won the 10-meter air rifle competition and a berth on the US Olympic team bound for Beijing. Just a shy, slightly self-conscious smile. It was the first and only emotion Scherer showed during three pressure-packed days in Colorado Springs. He was as composed in victory as he had been throughout the best shooting performance of his life. Or perhaps he was in shock. Scherer had had no expectation of making the Olympic team, not as a 19-year-old with a lot still to learn about the sport. He figured the Olympic trials would offer good preparation for representing West Point - where he is going to be a sophomore - at the NCAA riflery championships a couple of weeks later.

"I probably surprised myself more than anybody else there," says Scherer. "Shooting is a very mental sport. A lot of times, it doesn't sink in that you've won until after, because you're so concentrated on the shooting."

Competing against a 2004 Olympic gold medalist and a two-time Olympic team member, Scherer consistently put up high scores. Out of a perfect 600, he posted 595, 597, and 594 in the daily matches (each competitor gets 60 shots and a bull's-eye is worth 10 points). And each day, Scherer advanced to a bonus round with the opportunity to increase his point totals. His consistency silenced whispers about the teenager being more lucky than skilled at hitting a dime-sized spot on a target 10 meters away; the higher the stakes, the better he performed. "I still can't figure out how he held it all together," says Scherer's West Point coach, Major Ron Wigger. "The mental aspect is learned over time. You just don't go to the Olympics. He was a total dark horse."

Not bad for a teenager from Billerica who professes a love of all things Army and his admiration for Jimi Hendrix in the same breath. And whose mother didn't even want him to have a squirt gun as a boy.

"I was very anti-gun when my kids were little," says Scherer's mother, Sue, who works a number of different jobs, including cleaning and painting houses, running a day care, and organizing Jeopardy!-style entertainment for nursing homes. "I always thought, `Guns are bad. Guns kill people.' So, I didn't want my kids to have anything to do with guns."

Sue eventually softened her stance and bought Stephen and his younger sister, Sarah, toy water guns shaped like elephants. But Stephen wanted more. He made complicated pistols with Legos. He played endlessly with a BB gun inherited from a friend. Talking about his early interest in shooting, Stephen now says, "It's sort of like, if it's wrong, you want to do it more." When he spotted a sign for the Massachusetts Rifle Association on the side of the road in Woburn, he copied down the phone number and called. The junior program cost $1 with equipment provided. Sue figured proper training at a shooting range was better than Stephen's firing his BB gun down the hallway of their home into a trap.

Stephen enrolled in the program at 11, and his sister followed. (Sarah, who is now 17, narrowly missed a spot on the Olympic air rifle team.) While Sue jokes that a distant relation to Daniel Boone played a part in the family's quick ascent through the national shooting ranks, Sarah says, "The only reason we're as good as this is because we've had each other."

The Massachusetts Rifle Association facility in Woburn has become a second home for the Scherers. On a sweltering summer day, it is too hot to practice in heavy leather and canvas shooting coats. So, wearing a red Hawaiian shirt and jeans, Scherer positions the psychedelic-blue stock of his air rifle - a precision firearm nothing like the BB gun he played with as a kid - high across his chest to demonstrate a shooter's stance. At 6 feet and 150 pounds, Scherer is taller and thinner than most of his competition. In many other sports, his wiry frame would be an advantage. In air rifle, it makes it difficult to find a stable shooting position. He works to keep his body as relaxed and still as possible, his breathing and heart rate steady and under control. The slightest unplanned movement can mean failure in a sport that rewards perfection.

As children of a single mother who struggled to make ends meet, Stephen and his sister see the sport differently than other elite athletes. "I learned how to work your way through life and realized how hard life actually is. Shooting is a privilege and you should have fun with it," Stephen says. "For us, shooting is a part of who we are. It's not what we are."

The Scherers are a close-knit, religious family. They attend Park Street Church in Boston and during the school year go to services at a small chapel at West Point many weekends; they say grace before meals. The three talk and laugh among themselves like best friends. They are bonded by years of home schooling and financial hardship. Sometimes they couldn't make it from paycheck to paycheck. With competitive shooting start-up costs averaging $5,000, the family lived "very cheaply" in order to participate, Sue says, and last year, the Scherers couldn't attend nationals because they didn't have enough money.

"We don't think of it as tough," says Sue. "We just think, `OK, this is the next thing we need. When we have money, we'll get it.' " Unfailingly positive, Sue believes family hardships helped make her son an Olympian much earlier than anyone expected. "He doesn't get nervous in pressure situations," she says. That should come in handy next month in Beijing.

Shira Springer is a Globe sports reporter. E-mail her at springer@globe.com.