Mandy Nelson's talent has led to gigs with Travelocity and Sony, thanks to the 33-year-old's sometimes sexy, sometimes perky, always marketable voice. 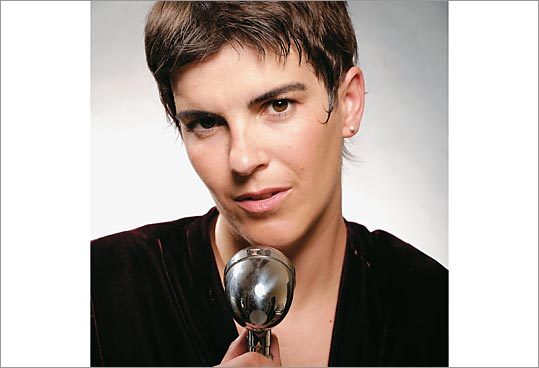 So I might hear you on the other end of the phone when I call a customer service line. Describe your voice.

Depending on the application, it can be pleasant and hypnotic, energetic and young, or soft and sultry. I don't try to do accents, but I can change the tone of my voice easily. [For samples, go to Dandysound.com.]

Why become a voice talent instead of a DJ or a radio personality?

It really fell into my lap, and I ran with it. I've done public speaking since I was 5 and was at WERS for a few years as Delsina on "Bluesology." It just seemed natural to make talking a profession.

Delsina - isn't that the name of a drink I've seen around town?

Delsina was my paternal grandmother, who died at 105. At some point, I invented a drink in her honor - tequila, a hint of Grand Marnier, and ginger ale with lime. Friends started asking for them in bars in and around the city, and one day we realized we didn't have to explain the drink anymore.

You work at home with two toddlers. How do you avoid an errant "Mooommmmeeeeee!" shriek in the background?

It's a juggle. Some days are easier than others. I often work at night, but I field a lot of e-mails and online chats from clients during the day, sometimes with a princess in my lap.

Ever use your voice to fool your friends or confuse a telemarketer?

That is one of my favorite things to do. Nothing like telling them the call is being recorded for quality assurance purposes in my "voice." It just makes me happy. I do it to friends sometimes, too. I like to tell them their account is overdue.

You've done work for Travelocity, among many other places. Have you ever actually seen the Roaming Gnome?

He and I share coveted space on a T-shirt but have not been formally introduced.

Maintaining my voice. I have season tickets to the Celtics, and on weeknights I try not to yell. Friday nights, though, I let loose. Also, being pregnant made breathing a real challenge. One client knew I was pregnant the second time just from hearing my unedited voice files.

Have you ever lost your voice in the middle of a big contract?

I've gotten colds and sinus infections. There's nothing you can do but wait it out. I love my neti pot. And Zicam. And sleep. I usually manage two out of the three.

I get called on to talk really fast, and that can be weird. Like the time I had to talk fast and be perky for a funeral home.