When amputee athletes compete against able-bodied athletes, they're called courageous. But when they nearly win, as a South African sprinter did earlier this year while trying to qualify for that country's Olympic team, they are accused of cheating. It's a hypocrisy that doesn't sit well with MIT professor and double amputee Hugh Herr. 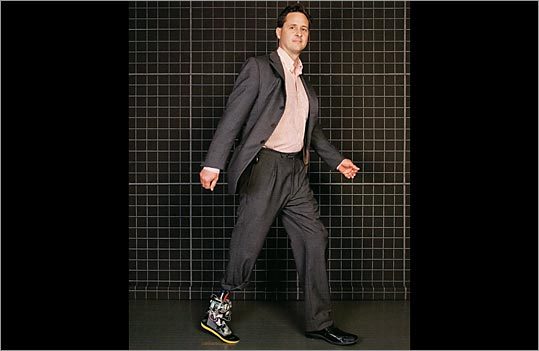 (Photographs by Peter Urban) Hugh Herr wears a robotic prosthesis still under development on his right leg and a more conventional one on his left.
Email|Print|Single Page| Text size – + By Shira Springer June 29, 2008

Hugh Herr walks around his MIT laboratory with a swagger, a smooth, hip-driven motion that draws comparison with the way John Wayne would mosey through a dusty Western town. It is not a swagger born of cockiness, although Herr's accomplishments in prosthetic-limb design certainly entitle him to a little attitude. His swagger is an adaptation, a byproduct of being a double amputee. Explaining his surprisingly fluid gait, Herr says, "I'm something of an outlier." He should know.

Inside his biomechatronics lab - devoted to the intersection of biology, mechanics, and electronics - experimental prostheses lie on a table, a collection of metal parts and circuitry engineered to mimic human muscles and tendons. The professor's goal is to one day reach the point where artificial limbs improve upon human design, but he insists that he and his fellow scientists haven't reached that point yet.

That belief is why he became so intrigued by claims that carbon-fiber "Cheetah" Flex-Foot prostheses gave a competitive advantage to South African sprinter and double amputee Oscar Pistorius. In January, the IAAF - the international governing body of track and field - ruled that the Cheetah's springy, J-shaped blade gave Pistorius an unfair advantage over able-bodied athletes by allowing him to use less energy as he ran. It then banned him from the Olympics.

Pistorius planned an appeal, and his legal team contacted Herr, hoping the MIT professor could assess the IAAF claim. For two weeks spread over February and March, Herr and a team of experts in biomechanics and physiology performed tests on Pistorius at Rice University in Houston. The tests done in that school's locomotion laboratory showed that the Cheetahs did not enable the double amputee to conserve energy or provide a mechanical advantage when sprinting. When Herr presented the team's findings before the Court of Arbitration for Sport in Switzerland last month, it reversed the IAAF ban, clearing the way for Pistorius to compete at the Beijing Olympics in August if he qualifies for his country's team.

"One thing we're fighting against is pop culture and Hollywood," says Herr. "People believe things exist that don't. I believe one day technology will go beyond what's capable with human legs. But the Cheetah ain't it. There has never been a prosthesis developed that's been shown to decrease energy requirements to walk or run."

For Herr, it was a scientific and a personal victory. Twenty years ago, he was accused of cheating in competitive rock climbing; he had competed wearing prosthetic legs he had designed for the sport. "With Oscar, it was like, 'Here we go again,' " says Herr, 43. He is bemused by the fact that when amputees run or climb more slowly than "intact-leg competitors," their athletic displays are considered courageous. But as soon as amputees prove they can actually compete with able-bodied athletes, accusations of cheating follow, he says.

As a teenager, Herr thought nothing of climbing a 2,000-foot granite face without a rope - he just didn't tell his parents. His sights set on becoming the best rock climber in the world, Herr sought out challenges whenever and wherever he could find them. That was why, as a 17-year-old, Herr and his climbing partner made a pilgrimage in January 1982 from Lancaster County, Pennsylvania, to New Hampshire's Mt. Washington. The pair took on Huntington Ravine but made the mistake of continuing toward the summit in worsening weather. They became disoriented and mistakenly descended into the Great Gulf region. "I was certain we were going to die," says Herr, recalling the nearly four-day ordeal. They faced temperatures around minus 20 degrees, a whipping wind that made it difficult to stand, and waist-high snow. When they finally saw signs for a roadway, their legs were so severely frostbitten that they couldn't walk.

"By the time your eyes figure out you're falling, it's too late," Herr says. "It's like one of those Weeble wobble toys. At a certain point, we gave up. That meant no longer hugging one another to stay warm. We were trying to accelerate death." A woman out snowshoeing found the pair. By then, Herr's lower legs could not be saved. He soon got his first prostheses.

"With the artificial legs that were provided me at the time, I was told, 'Just accept it. They can't be changed. They can't be improved,'" says Herr. "I was also told by a doctor that I would never climb again." Herr says he "cried for 24 hours," then "I realized he knew nothing about climbing. The paradigm shift in my head came a few months later. I thought, 'Gee, a huge fraction of my body is artificial. It's a blank slate I can create whatever I want with. My artificial feet need not look human. They can be optimized for the vertical world.'"

Wearing special legs he made for himself during his recovery and rehabilitation, Herr was soon out climbing again. With work, he was able to scale rock surfaces more difficult than those he'd tackled before the accident - not, he will tell you, because of the prostheses, but because he'd devoted himself to the sport. When he tired of the extreme-athlete life, Herr returned to school, enrolling at Millersville University in Pennsylvania. There, he discovered a passion for math and science and secured his first patent for prosthetic-limb design before graduating.

Rice professor Peter Weyand (a member of the team that tested Pistorius) calls Herr a "world leader" in the field. Herr is at now work on the next generation of prosthetic legs - robotic feet, ankles, and knees that function and react like their biological counterparts. Aimee Mullins, an accomplished athlete, double amputee, and matchmaker between Pistorius and Herr, describes the MIT professor as "inherently very elegant." Mullins believes that trait influences his approach to prosthetic design: "Hugh understands the whole package is exciting."

Holding up a complicated foot, ankle, and lower leg structure in his lab, Herr draws attention to its mechanical calf muscle. "When I first used this, it finally felt normal to walk, to have that force," says Herr, who knows his ability to self-test designs is a huge research advantage. "Being an amputee, you're completely reliant on technology. If I unclip my legs, I can only crawl. From my accident recovery, I realized people aren't disabled. Technology is disabled. I developed a love for technology's extraordinary capacity to heal."

Shira Springer is a Globe sports reporter. E-mail her at springer@globe.com 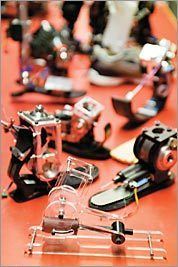