(Photograph by Hornick-Rivlin) Owen, left, and Jack Boucher got the surprise of their lives when they came home to find the Green Monster painted on a wall in their bedroom.
Email|Print|Single Page| Text size – + By Regina Cole June 29, 2008

Jack and Owen Boucher share a room, which might ordinarily be a problem for 13- and 10-year-old brothers. But not here: One long wall of their bedroom is painted to look like the Green Monster, and for these young athletes, it is pretty much the coolest thing - ever. Twin beds sit at either end of the Fenway Park scoreboard, on which Ortiz is up and the Yankees are decisively losing to the home team 6-0.

"Our friends think we're kidding," says Owen, with a grin.

"They don't believe it until they see it," adds older brother Jack.

"Does it inspire you to play better?" asks their father, John Boucher. He and his wife, Lisa, decided to surprise the boys with a Fenway-themed room in 2007, a year after the family moved into a condo in the Back Bay. After a few Google searches, Lisa found the website of M-C Lamarre, an artist in New Bedford who started painting Fenway-inspired murals on request in 2004. She has since completed about 25 such projects across New England.

"I'm one of 10 children, and with all my nieces and nephews, I get lots of requests to decorate nurseries," Lamarre, 34, says. "After having decorated rooms for a whole string of nieces, when one of my nephews moved into a new house in 2003 I created a Fenway-inspired mural for him, which is how this started."

Last fall, the parents of a baby boy in Saugus asked Lamarre to paint a soft sepiatoned scene from a 1950s Fenway Park on the walls of their son's nursery. Adult fan Sean Stevenson wanted an entire wall in his Bedford, New Hampshire, basement sports room transformed into the Monster. "My wife calls it `Mantown,' " he says. Although he and his friends already gathered in the space to watch Red Sox games, he says it wasn't really complete until Lamarre painted the mural. "It never occurred to me that I could do this until I met her," Stevenson says. "The game she painted on my scoreboard is the one in 2004 when the Sox became the team that went on to win the World Series."

An avid Sox fan, Lamarre has always loved Fenway Park. After witnessing Clay Buchholz's no-hitter in 2007, she was inspired to paint the game's scoreboard on bar stools, now kept in her studio. While she's working, many clients will come in and tell her about the first time they went to Fenway, or share an exuberant moment experienced in the stands. "People really enjoy bringing a piece of that into their homes with them," she says.

Lamarre recently spent five days painting the Green Monster onto a 42-by-11-foot side of a Waterbury, Connecticut, barn. She says the homeowner hoped that the mural would cheer up his family after his mother-in-law - a huge Sox fan - passed away. They call it the "Green Barnster." Lamarre says that "people would come by and see the progress, and I enjoyed the thumbs up I would get from the postman."

Lamarre personalizes each project to her client's preferences. In one young fan's room, the scoreboard displays the date of his birthday. One Sox fan loves , so on his painting, Lamarre incorporated the fast-food logo as well as the Citgo sign. A portable scoreboard commissioned as a 30th anniversary gift has the couple's wedding date on the back.

To identify the perfect Fenway-green paint, Lamarre took swatches to the ballpark and tried to match them. But she doesn't use only one color in her murals. It depends on the amount of natural light in the room. If she's painting a basement, she'll use a lighter green.

"This is different from the usual interior decorative work," Lamarre says. She's used to working with women, since they tend to make most design decisions. Now her clients are often children and young men. Says Lamarre: "It's a switch, and it's fun."

Regina Cole is a freelance writer living in Gloucester. Send comments to designing@globe.com. 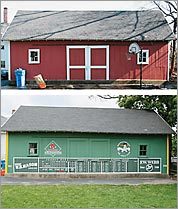