Will the "booster seat" law make a big difference? 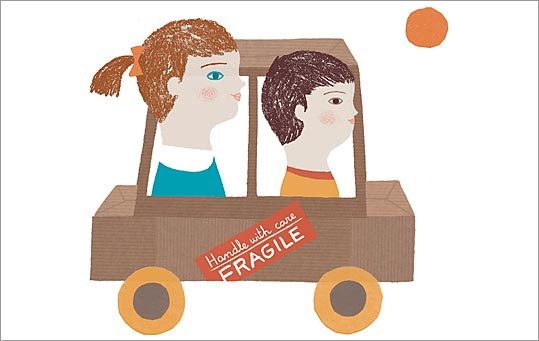 The other day, after stopping at a traffic light in Dorchester, I glanced over to the next lane to find a driven by a young mother. There were three young kids bouncing around the back seat and a slightly older kid riding shotgun. All of them were unbuckled.

I've been thinking about that scene lately in light of Massachusetts's new tougher "booster seat" law, which will go into effect July 10. The old law required that all children under age 5 and 40 pounds be buckled into child safety seats, and after that use seat belts. The new law mandates that they stay in child seats or booster seats (which lift the child to make the adult seat belt fit more properly) until they reach the age of 8 or the height of 4 feet 9 inches, when they can switch to seat belts.

Its backers tout the law as a huge leap forward for safety, arguing in one news release that the existing statute "falsely suggests to parents that it is safe for their children who are 5, 6, and 7 years old to be placed in an adult safety belt."

As a father of three who has driven cabbies nuts as I did the complicated dance to install an infant car seat for a ride from the airport, I fully support government intervention to save children's lives. After poring over multiple studies and talking at length with dueling researchers,I am persuaded that the booster seat law will reduce injury. But there's solid data suggesting the reductions may well be considerably more modest than promised. And I'd wager that the new law, like the old one, will do little to curtail the risky behavior of parents like that Dorchester mom.

As child-seat laws have been strengthened in and spread to all 50 states, we've seen a dramatic improvement in safety for kids. Still, car accidents remain the leading cause of death for children ages 2 to 14. Of all the fatal US crashes in 2006 where there was a child passenger, one-quarter of those kids were riding unrestrained - without a car seat or seat belt. In cases where a child was among the fatalities, close to half of those kids were riding unrestrained.

The new law doesn't ask much of parents, since, unlike those infuriatingly complex and often improperly installed infant car seats, booster seats are pretty cheap and simple to use. But it sends the troubling message that parents who let their 4- to 7-year-old kids ride around buckled into seat belts are just as irresponsible as those who let them ride around without any kind of restraint. That's just not true.

In 2005, economist and Freakonomics co-author Steven Levitt caused a stir by arguing that for children ages 2 to 6, there was no meaningful difference in fatality rates between those in child safety seats and those in regular seat belts. Researchers at Children's Hospital of Philadelphia fired back, accusing Levitt of recklessly drawing conclusions based on fatalities and overlooking the higher risks of serious injury, particularly to the abdomen and spine, faced by kids restrained by seat belts designed for adults.

But in 2006, Levitt and MIT economist Joseph Doyle looked squarely at injuries. They found no difference between child seats and lap-and-shoulder seat belts in the two most serious injury categories, though they did report a 25 percent reduction in the least serious injury category for those riding in child seats. Their results differ significantly from the Philadelphia team's finding of a 59 percent reduction in the risk of injuries for child-seat passengers, a data point that has become the linchpin citation in booster seat legislative efforts in other states.

Doyle and Kristy Arbogast, the Philly team's director of field research and engineering, each question the other side's methodology. I'm no expert, but both studies struck me as rigorous, if imperfect.

Their disagreement obscures an important question: Why hasn't the auto industry been forced to design adjustable seat belts that work for both kids and adults? Arbogast says that, believe it or not, no one has been able to design a crash-test dummy that accurately simulates a child's abdomen and pelvis.

As for the new state law, Doyle calls it feel-good legislation: "You feel like you're helping people. But it's not the best way to make public policy." He argues it would have been more effective to do what 12 other states have done and pass a law prohibiting kids from riding in the front seat. Researchers agree that children are much safer if they ride in the rear.

Still, Doyle, who has a 1-year-old and a baby on the way, says he'll obey the booster seat law - and an equally influential authority - when his kids get older. "My wife," he says, "isn't going to listen to me about using seat belts."

These are the 12 states that have passed laws prohibiting children from riding in the front seat, when possible, and the ages involved:

Washington: 12 years and younger must be in rear seat if practical

Maine: 11 years and younger and less than 100 pounds must be in rear seat if available

Tennessee: 8 years and younger and less than 4-foot-9 must be in rear seat if available; rear seat recommended for children ages 9 through 12

Wyoming: 8 years and younger must be in the rear seat if available

New Jersey: 7 years and younger and less than 80 pounds must be in the rear seat if available

Rhode Island: 6 years and younger must be in rear seat if available

Georgia: 5 years and younger must be in rear seat if available

South Carolina: 5 years and younger must be in rear seat if available

California: 5 years and younger or less than 60 pounds must be in the rear seat (see note at bottom)

Wisconsin: 3 years and younger must be in a rear seat, if available

New Mexico: Children younger than 1 year in a rear-facing infant seat must be in the rear seat if available

Virginia: Children in rear-facing devices must be in a rear seat if available; if not available, they may be placed in the front only if front passenger airbag is deactivated

Note: All of these laws state that the preference for the rear seating position is subject to availability. Even California comes with the following disclaimer: