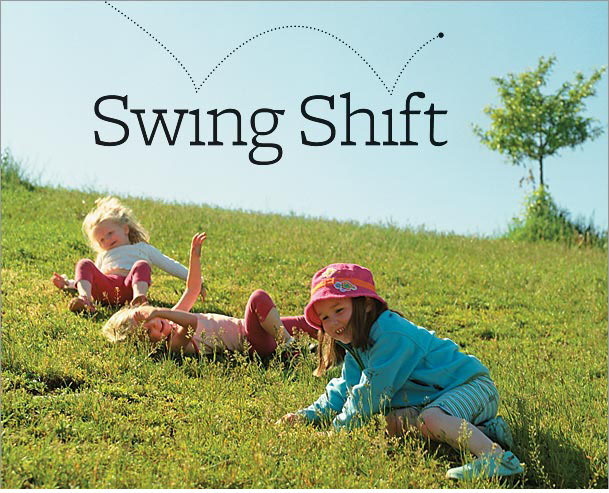 Girls tumble down a slope at Robbins Farm Park in Arlington.
A dad and his daughter go scouting for speedy slides, twisty tire swings and - most important - playing kids. Five playgrounds worth the trip.


By Geoff Edgers • Photographs by Kathleen Dooher
Be honest, moms and dads. There’s a lot not to love about playgrounds. Strained conversations with other parents. Sandbox spats. Stroller envy. But face it – we need the monkey bars. How else to get our kids to burn off the energy they would otherwise apply to destroying our homes from within?

With nearly six years of parenthood under my belt, I figure I’m as qualified as anyone to evaluate the area’s playgrounds. (Make that almost anyone. I had a key adviser on my travels, my daughter, Lila.) Over the course of several weekends this spring, I came up with five top spots. I confess I had some preconceived notions. For one thing, having read Belmont author Tom Perrotta’s Little Children, I expected to run into prom kings – studly young dads – and the frustrated moms who love them. No dice. As Perrotta politely reminded me on the phone, Little Children is fiction. “The playground was the most unsexy place I ever spent a lot of time,” he told me. His kids are not playground age anymore, but when they were, he took them to Hosmer Playground in Watertown.

On one of our first missions out, Lila and I headed to Hosmer. There was nobody around, so we followed the first rule of playground scouting: An empty playground, like an empty restaurant, can be a serious buzz-kill. We moved on. 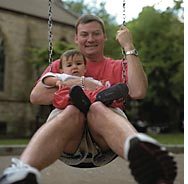 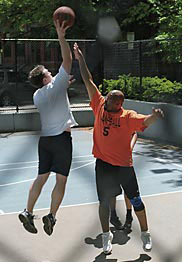 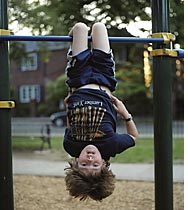 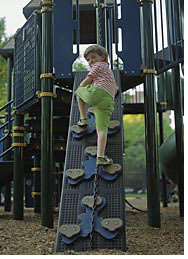 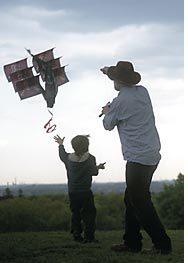 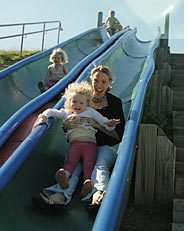 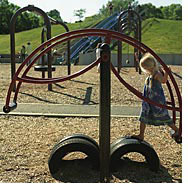 Robbins Farm Park, Arlington.
1. Artesani Playground
1255 Soldiers Field Road, Brighton
Located on the banks of the Charles River not far from where Alewife Brook Parkway meets Soldiers Field Road, Artesani Playground is actually two playgrounds side by side: one for tots, the other for older children. There’s plenty of parking, and with lots of picnic tables and benches, parents can chill as the kids check out the slides and monkey bars.

Prime attraction: Water, in all of its glory. In addition to the Charles flowing by, there’s a wading pool that’s open in the summer. Jets shoot streams into the air, and lifeguards watch over. As important, there are bathrooms. “This place is really clean,” says Cambridge’s Maria Zaklin, 34, mother of 3-year-old Eli. “You have to shower before you go into the pool.”

Downside: Don’t let the kids scramble out of the fenced area. They’ll run into a little thing called goose droppings. On this spring day, the Artesani could also use its hot dog stand. “Sometimes the kids get hungry,” says Milagros Rosado, 30, who regularly hauls her two children from Dorchester to the park.

2. Titus Sparrow Park
West Newton Street, next to the Southwest Corridor Park, Boston
Tucked into the South End, Titus Sparrow Park is the ultimate compact urban play space. Dog walkers stroll along, making sure not to let Fido relieve himself in the meadow. Basketball players hit the court. Kids play on the swings, slides, and monkey bars. Prime attraction: Location, location, location. There’s also Kathy Hanson, a 63-year-old neighbor who watches over Titus like a hall monitor. On a recent morning, she pounced on a schoolgirl standing on a toddler swing (“It’ll break, and that’s the second one we’ve had”) and chased down a dog owner she anticipated might be heading to the meadow. “People either love her or hate her,” says Giulia Del Guercio, while keeping an eye on her son Jacob, 5. “I love her.”

Downside: Take your stroller envy pills – bugaboos are everywhere. “It’s like an SUV for strollers,” said Scott Nelson, 32, trying to justify the $1,000-plus that a group of family members spent on his firstborn’s stroller and accessories. “It gets through everything.”

Lila says: She’s not impressed by the playground’s equipment but is pleased to find enough insta-friends to spark a high-swinging competition.

3. Warren Park
90 Washington Street, Wellesley
We were expecting pricey baby gear, Gwen Stefani-style (see: Titus Sparrow). Instead, this Wellesley playground was decidedly low-key. There’s plenty of variety, from a rock-climbing wall for bigger kids to three long slides to a large climbing structure. “This playground is big enough but enclosed, so you’re not afraid they’re going to run into the street,” says Wellesley’s Shirley Macbeth, there with her three children.

Prime attraction: Lots of foliage makes Warren a perfect spot during the dog days of summer. “With some playgrounds, the slides are too hot to even go down,” says Natick’s Kimberly Duckworth, 40, who was playing with her toddler, Clara. “Here, it’s shaded at just the right time.”

Downside: The park is not close enough to walk to a Starbucks or Dunkin’ Donuts. “You need to go in there with a substance, caffeine or some piece of reading material,” says parenting author Harlyn Aizley, a mother of a 6-year-old. You have to plan for Warren.

4. Winthrop Park
St. Paul Street, Brookline
Inside this fenced-in 2-acre site, you’ll find a playground, a ball field, and the Minot Rose Garden. The crowd displays the kind of diversity you would expect in Coolidge Corner, with sunbathing college students on one side and Orthodox Jews just out of Saturday services on the other.

Prime attraction: A rock-climbing ramp with chains for pulling yourself up, 10 swings, long slides, and a tot area with rubber-tire padding to prevent painful falls. But the atmosphere is key: Winthrop is usually packed, except at naptime.

Downside: No bathroom, but don’t despair. A public library is just around the corner on Pleasant Street. Lila says: “The park was very pretty. I liked that there were big trees so I could hide.”

5. Robbins Farm Park
61 Eastern Avenue, Arlington
This 11-acre park in Arlington is a prime sledding and kite-flying spot, and the panoramic view of Boston is stunning. Robbins is also, thanks to an active friends group, a gathering spot throughout the summer, with movies and Red Sox games shown on a giant rented screen. The recently renovated playground’s also a keeper.

Prime attraction: The 50-foot slides – two of them, side by side, allowing for races – draw kids from all over. Cambridge’s Karen Soroca, 37, heard about it from a woman in her yoga class and decided to take her 2-year-old daughter, Sarah. “We’re here so she’s not bouncing off the sofa,” she says.

Downside: There’s no bathroom. And with so much to see and do – and a playground packed with people – it can be easy to lose sight of little Janie. Lila says: Her favorite, but she’s biased. This is her hometown, and there’s a great tire swing.

Geoff Edgers is an arts reporter for the Globe. E-mail him at gedgers@globe.com.