Road to the White House

Decorating on a budget is easy if you follow Ellie Summers's vision for peaceful, pure, and plenty affordable design. 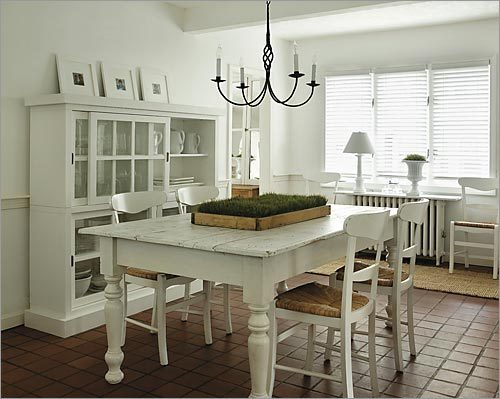 Like many homes stuck in the '70s, Ellie Summers's house was plagued by dark cabinetry and gold shag carpeting. Today, her cottage-style house in a modest West Newton neighborhood is light, airy, and timelessly chic. But the transformation didn't happen overnight. Summers, who has lived in the home for 41 years, started making the changes about 20 years ago, as her three children were growing up and out. It didn't require a hefty budget. Almost everything in Summers's home was recycled, refurbished, found at flea markets, or purchased at low-end and mid-range retailers.

Fifteen years ago, a friend introduced Summers to Kelly McGuill, an interior designer in Walpole, and they've been collaborating ever since. "I don't make a move without consulting Kelly," confides Summers, 69. The two have become close friends, and even though McGuill is the designer, she says she's learned just as much from Summers as she's taught her. Summers "started doing things 20 years ago that have only recently become trends in the design world," says McGuill. One such example is the home's white palette shot with green - Granny Smith apples piled in wire baskets, grass planted in low wooden crates, urns crowded with moss.

"The clean bright space works for me," says Summers. "I've had friends come in and say, `The house will look great once you get some paint on the walls,' but me, I like it. The white makes me feel peaceful. I don't like clutter. And that's been tricky over the years, as this house does not have much storage space."

Summers and McGuill tackled this age-old problem with storage boxes purchased at The Container Store ("They're the only ones I could find that were white," explains Summers) and trunks acquired by McGuill at the Brimfield Antique and Flea Market Shows, the largest outdoor antique show in New England (summer show, July 8-13; brimfield. com). The trunks in the living room, which cost $300 for the pair, hold serving platters and Christmas decorations. "This way I don't have to carry ornaments up and down the stairs every December," says Summers.

Summers finds that too many accessories overwhelm her. "Mirrors are my art," she says, referencing the Gothic-style glass cabinet doors (the glass was replaced with mirrors) that rest on a long trestle table in the living room. "They were originally very, very dark," says McGuill. "Ellie was skeptical, but once they were whitewashed, she loved them. We left the hinges and knobs on them, for additional interest." For the living room's built-in shelves, Summers experimented over the years with books and knickknacks, but found that only white and glass items worked, like votive holders and jars purchased at Brimfield for as little as 50 cents. One of her favorite finds is a sculptural piece of lacy grillwork, which is actually an old structural support spray-painted white. "I've learned to always keep a can of white spray paint around," says Summers.

The theme of white palette and minimalist cottage decor is carried throughout the house. Summers fills the glass cabinet in the dining room with an assortment of plain white and chunky glassware from Brimfield and the China Fair in Newton, a discount housewares and party supply store. Other treasures include her collection of ironstone pitchers (bought at Brimfield for $10 and up), which line the shelf below the mirror at the foot of the stairs. The shelf, originally from a neighbor's cellar (it had held laundry detergent), was refinished by a friend. To personalize the simple space Summers keeps stacks of family photos on rectangular white platters throughout the house. When her children and grandchildren visit, they love sifting through them.

Children? Not a problem. "The house is completely child-friendly," insists McGuill. The sisal rugs are virtually indestructible, and the beige twill sofas can withstand a lot of wear and tear. "When the kitchen table gets too wrecked," adds Summers, "my daughter slaps another coat of white paint on it."

There is another upside to the pristine palette. Says Summers: "My house looks good no matter what, in every season . . . with kids or without, during Christmas or Halloween. I always love coming home."

Paint manufacturers have hundreds of names for what most would refer to as simply "white." (Simply White is actually a Benjamin Moore color.) Ralph Lauren Home offers 60 shades of white paint in its White Wash collection. How to differentiate? I find myself being drawn in by the name. I once painted the trim of my lavender bedroom Martha Stewart Magnolia because I thought the name reeked of Southern romance. For my toddler's room, I chose Ralph Lauren Pocket Watch White, half hoping it would bring out his inner gentleman. (It didn't.)

Jeanne Babel, owner of Babel's Paint & Decorating in Norwood, says, "We always chuckle when a customer comes in and says, `I just want some white paint,' " as Babel's offers more than 100 shades. "It's all in the undertones," she points out. The whitest white, like C2 Architectural White, has no undertones and conveys a sense of coolness. When combined with a primary red or blue, it is crisp and fresh, perfect for a nautical look. Jess Ritchie, showroom manager at Farrow & Ball at the Boston Design Center, agrees: "Those decorating cottages or beach homes often pick the purer whites to achieve a crisp look, choosing All White or our new Wimborne White."

When using white and off-white in the same space, be sure there is enough contrast between the two hues, so it looks intentional, says Babel. If you're using the same color white for both the walls and trim, you might try different sheens. For example, try an eggshell finish on the walls and a rich gloss on the trim, which creates a subtle contrast. To create an antique effect, Ritchie recommends colors with creamy yellow undertones, like Farrow & Ball House White. For that effect, Babel suggests C2 Wedding Cake.

Interior designer Kelly McGuill goes for the pure whites, her favorites being Benjamin Moore White and Decorator White, because these shades are clean and soothing. Of course, it's a matter of personal taste. I, for one, am inclined to try the Wedding Cake.

Marnie Elyse Katz is a writer in Boston. Send comments to magazine@globe.com