For troops, the way home from war is a long, long road. I know - I'm still on it. 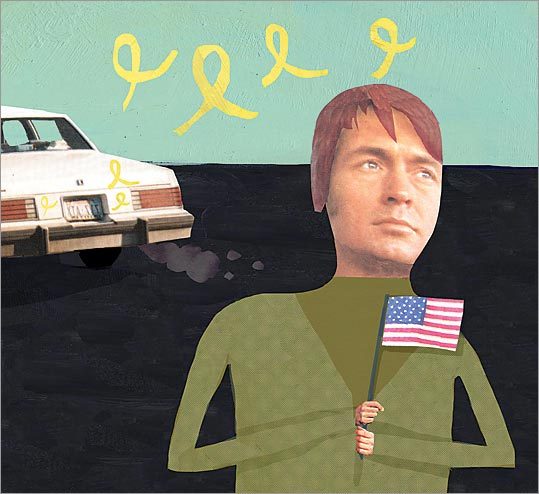 I'm driving. Jack, my copilot, sleeps in the passenger seat. His chin rests on my upper leg. The car in front of us wears two "Support Our Troops" ribbons on its backside. One is yellow, the other red, white, and blue. Both were made in China. On the right-rear bumper is a black and faded MIA sticker. The driver of the car probably means well, but by now I've seen too many ribbons. While the wars in Afghanistan and Iraq kill and maim, I can't help but think how they are also shaping the future of returning veterans. Many of these men and women will come home and go missing and you won't even know it. Returning from a war is more than getting off an airplane and putting on civvies. Combat changes a person. It changed me.

I'm driving angry. I want to tell the guy in front of me: You want to support the troops? Get them the hell out of the line of fire. Or, if you think this war is such a necessary enterprise, haul your butt on over there. If you're too old, pull your kids and grandchildren out of college and send them.

I'm driving sad. You want to support our troops? Give the man some space when he gets home. Give the woman a job. Don't tell either of them how you would have been there if you could have, and then spin off a bunch of excuses. He may keep to himself. She might be missing an arm. He could be in a wheelchair knowing he'll never chase his kids down a beach again. Both may drink a bit. She may smoke pot, dress wild, and date too many guys. She might like to play her music too loud and dance alone in her room. He could go to the movies for hours and come home and cry and cry. Don't lecture them. Don't tell him to forget about the war - he can't. Don't try to tell her how she's escaping reality. She's had all the reality she can stomach. He may carry what you call an attitude. She might have an extremely low BS tolerance, a quirky sense of humor you don't really understand.

Listen up: If you've never hunted humans, if you've never been hunted, if you haven't been shot at on a regular basis, try to appreciate what this person has been through. Then get down on your knees and pray, and thank your lucky stars it wasn't you.

I'm driving lost. It's Vietnam, 1968, Quang Nam Province. I work up a spit of bleeding gums, saliva, and bug juice. I wonder about the skeletons we passed an hour ago. Sprawled outside four fighting holes, two of the skeletons lay mostly intact, arms reaching, legs cocked as if trying to crawl back to their open graves. The third had no skull. Turning my head, I scan the hot, windless valley. Single file, I follow Valdez, the radio man, 10 meters to my front. Where Valdez steps, I step. Heat worms up through the soles of my boots. Toes bleeding, heels aching, my swollen feet fester in the canvas and leather. An M16 bandoleer is slung over my shoulder, and the magazines inside clink lightly. Two grenades, like giant steel eggs, hang off my flak-jacket pockets. C-ration cans clank against the sticks of C-4 explosive in my kangaroo pockets. I hate being in the open like this. Breathing shallow to keep the burn out of my lungs.

Too scared to let my mind wander, I do anyway. I remember a girl back in The World - her face, the way she looked at me when we ate ice cream. I talk to myself. Mumble silently is more like it. Watch where you put your feet; look for movement, a wire, a vine, a slight depression. Don't stare, you'll get hypnotized. Scan. Doing it without thinking, repeating the movements like an endless rosary, my Marine squad stretches a hundred meters single file along the floor of Happy Valley.

I'm driving home. The car in front with the ribbons turns off. I go straight. Rolling down the windows, I crank up Rod Stewart on the radio and scratch Jack between his soft and beautiful ears. He likes his window all the way open. He moves there to put his face in the breeze. You want to do something for our troops? Bring them home.

George Masters, a writer in Brookline, served in the Marine Corps in Vietnam and is currently at work on a novel. Send comments to magazine@globe.com.