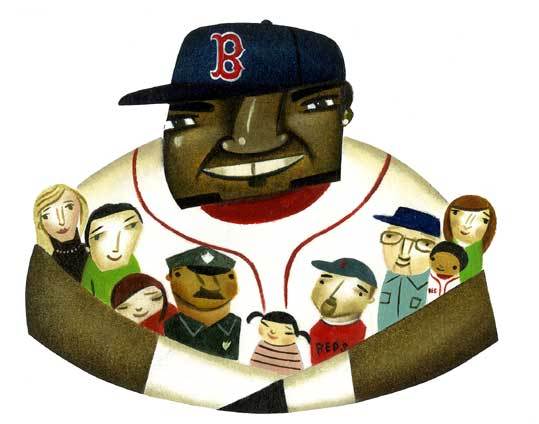 In New Hampshire, a friend and I were given tickets to Game 2 of the American League Championship Series. We both have been to Beantown several times and assured our husbands we knew where we were going. In our excitement at seeing the infamous Citgo sign and the skyline, we drove right past our exit. We ended up completely lost, and time was ticking away toward the first pitch. We ended up stopped at a red light, and to our left was a fire department emergency vehicle. My friend rolled down her window and asked for directions. The firefighter's reaction: "You have tickets to tonight's game? No way!" He put on his lights, so vehicles would go around, and then told us to follow him. After coming to another set of lights, the firefighter jumped out of his truck, ran to our door, and told us that when the light turned green, he would block the intersection for us to do a U-turn. He said we would find ourselves right by the park.

Greg, my boyfriend, came home from work and asked, "Want to ride to Boston?" I thought he had bought tickets to Game 2 of the World Series. He said no, but he wanted to see if we could get some there. I was ready in five minutes, but I was sure we would be back in New Hampshire watching the game by 9. Off we went to Fenway, adorned in Red Sox garb. Greg had made a little sign - NEED TWO TICKETS - and there we stood. One gentleman came up and had tickets for $800 each. Of course, we couldn't manage those, and stood some more. At about 8, a gentleman asked where we were from and whether we were hard-core Sox fans. Greg said he could name the players from 1967 and where they played. He did that, then said, "Do you have tickets to sell?" The reply: "No, I have tickets that I will give to you for your Red Sox clothes that you have on." We were both stunned. Greg took off his jacket and his hat, and I no longer have my Julio Lugo shirt. When we arrived at the gate, I said to Greg, "OK, you go first, and if we have been scammed, I am just going to be right here crying." Voila! In we went, and the rest is history. I am still waiting to wake up from the dream.

I was lucky enough to score tickets to the ALCS Game 7 at Fenway on Sunday night. Having recently moved to Connecticut and started a new job, I knew it would be a late night for me, but how could I turn this down? Given all of the mayhem around Fenway, I didn't leave Boston until 1 a.m. and was driving fast. My heart sunk when the red and blue lights flashed behind me as I was cruising down I-84 in the passing lane. "Do you know how fast you were going?" the Connecticut trooper asked me after I had pulled over. "You were doing 94. I'm supposed to arrest you for going over 86. You're supposed to go to jail." I thought that my glorious night of Red Sox history was destined to become one of the worst episodes of my life. Just then, the cop piped up, "I noticed that Red Sox sticker on your car. Are you a Red Sox fan?" I told him I was. "You didn't go to the game tonight, did you?" he asked. Yes, I did. "No way!" He practically yelled, grinning from ear to ear. "How was it? How did you get tickets? Where were your seats? What was it like being there?" I answered every question, and before I knew it, he was walking back toward his car. "Slow down, OK?" God bless Red Sox Nation.