THIS STORY HAS BEEN FORMATTED FOR EASY PRINTING
the weddings issue

Stags Just Want to Have Fun

One boozy night at a strip club is increasingly being replaced by long-weekend bachelor parties where men play, eat, bond, and maybe even sip wine. 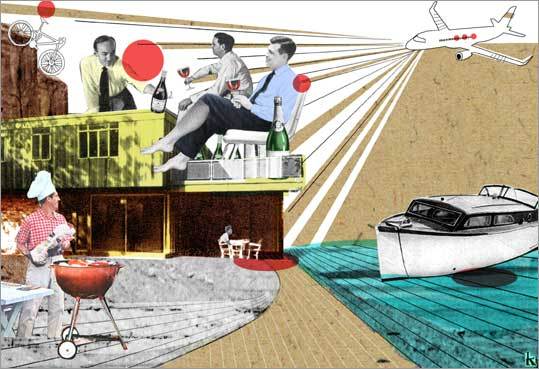 TWO MONTHS BEFORE his November nuptials, Boston attorney Dan Urman and nine of his closest buddies converged on a rented house at Lake Tahoe in California and spent 72 hours in a male-bonding ritual that would have made even Robert Bly envious. The men - who flew and drove in from 10 cities across the country - careened down muddy ski trails on mountain bikes, skimmed the lake in inner tubes lassoed to a powerboat, tried their luck at blackjack in nearby Reno, dined at fancy restaurants, and grilled pounds of steak and ribs. "We all got pretty banged up," says the 29-year-old Urman. "There's a picture of my friend with dirt in his teeth."

Urman and friends did drop by a gentlemen's club - "It wasn't, like, a really seedy one," he protests - and alcohol was indeed consumed, but this bachelor bash was more outdoor adventure than storied sleazefest. "I really wanted my friends to meet each other, and you can't get to know someone in a loud club with strobe lights and naked people."

Newlywed David Berkowitz of Boston bid adieu to his single days in Sin City. Last June, he and 11 old friends from across the country descended on Vegas, where they spent four days gambling, enjoying "a parade of lap dances" from scantily clad women in strip clubs, and drinking Grey Goose vodka until dawn. But they also relaxed around the hotel pool and went to a rap concert. "Mine was in Vegas but was toned down for Vegas," says the 32-year-old pharmacist. "The best thing was just seeing my friends who I don't get to see very often. . . . It's sort of the Old School phenomenon, where we want to re-create our past."

The trend toward uber-bachelor parties has evolved into a serious game of one-upmanship among super-competitive groomsmen in certain social circles, Bauer says. In 2005, Berkowitz's brother, who lives in Chicago, held his bachelor party in pre-Katrina New Orleans; later this year, Berkowitz will travel to other all-male gatherings in Miami and Puerto Rico.

But, boys, let me tell you, these are not cheap dates. The cost varies widely, depending on the quality of accommodations, restaurants, and entertainment, but men typically drop hundreds or even thousands of dollars on such weekends. Berkowitz estimates the Las Vegas trip cost each guy $1,500, excluding gambling expenses. Urman's friends paid about $600 each, not counting their travel expenses or blackjack losses.

Several things have sparked the lengthier, pricier destination bachelor party phenomena: older first-time grooms (and brides) and their friends with more disposable income; an increasing percentage of couples who cohabitate before marriage, making an in-town affair too humdrum (not to mention awkward when a bachelor wakes up, hung over, beside his bride-to-be or doesn't come home at all); weddings that often involve family and friends who are geographically scattered and need to travel, regardless, making a sexy destination more desirable; a harried workforce that sees a relative's or friend's bachelor party as a chance for a "minivacation."

Brides-to-be are also getting in on the action - or lack thereof. Elizabeth Lasater, a physical therapist from New Haven, says her six-woman bachelorette party held last July in Montreal, which featured pampering at a day spa and sightseeing, was relaxing, not rowdy. "We had the most fun hanging out in the hotel room in the morning and going across the hall in our pajamas to talk," says the 30-year-old.

While most bachelor blowouts are still being planned by the best man, a small number of luxury concierge services, like Montreal VIP, have become the males' equivalent of the wedding planner. Founded in 1999, Montreal VIP organized more than 800 bachelor parties last year, a number that represents 76 percent of its private- and corporate-outings business, says Oren Bornstein, director of marketing. "Women, predominantly, will put all their effort toward the wedding," Bornstein says. "Whereas for males, the bachelor party almost becomes their wedding. It's the biggest event."

Stacey Chase is a freelance writer living in Portland, Maine. E-mail her at storychaser@earthlink.net.