In an excerpt from his new book, The Assist, Neil Swidey finds Jack O'Brien, the impossibly intense basketball coach of Charlestown High, struggling to help one of his toughest players, Jason White, take his big shot at a better life, before it slips away. 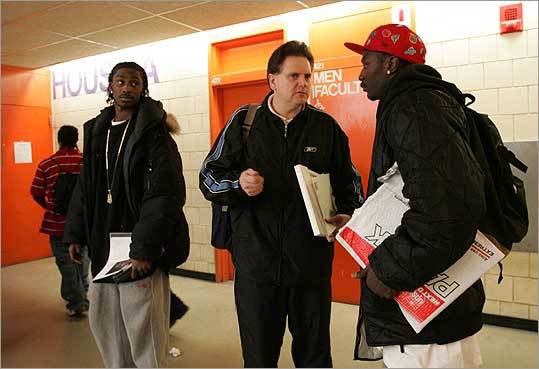 All year long, the Charlestown High School basketball coach had been hustling to help his senior cocaptain Jason White land a scholarship to play ball in college. It was a tough sell. Jason was just 6 feet, had an awkward jump shot, and made strangers uncomfortable by the way he stared at them with his piercing eyes under a stiff-brimmed baseball cap. Even his nickname - Hood - seemed to support the common impression that he was nothing but a thug. But O'Brien knew better. He knew how smart and vulnerable Hood was despite his steely exterior, knew how the kid's searing intensity made him the soul of the state's most dominant high school basketball program. O'Brien had grown hoarse trying to make the coach from Adelphi University in New York look beneath Hood's uneven play to see the gamer and leader that O'Brien saw, and then to pony up one of his coveted four-year Division 2 scholarships, worth more than $100,000. And now Hood was going to turn it down?

With the boy threatening to blow his best shot at rising above all the forces that tethered him to the streets of Boston, O'Brien called for some reinforcement from Hood's father, Willie Barnes. One early April night in their Roxbury town house, Willie took his son aside. "You know I ain't got no 100 grand, so what you gonna do?"

Hood told him he wanted to play football as well as basketball. Willie couldn't argue with that. He'd always thought his son was a better running back than a shooting guard. But he reminded Hood that he only had one scholarship offer, so he should take it. After a year, he could always transfer. "You ain't got a whole list, where you're Kobe Bryant and everybody wants you," he said. "If you're baking a cake and you need two eggs and you only got one, you gotta bake that cake with just the one egg. Your next cake, you can go to Stop & Shop and get a dozen eggs."

Willie thought there was something else at play in all his son's hemming and hawing: He seemed afraid to leave home. He had gotten so used to being a star at Charlestown High and one of the cool kids around Washington Park, his favorite haunt in Roxbury, that he didn't want to lose all that to become some low man at a white school on Long Island. "Leave these friends of yours leaning on the fence," Willie told him. "When you come back from school, you're gonna see them. But if you don't go, you're gonna be standing by the fence with them."

Willie had seen Hood hanging around with his cousin and other kids who had no shot of getting away from Boston's streets. He knew there was dangerous appeal in their lifestyle of no pressures, new girls, and familiar faces. So when Hood started making noise about maybe taking a year off, Willie shot it down.

"You ain't got time for no pauses," he told his son. "You just don't. Because life is short. It can be snuffed out any time."

IN LATE APRIL, ONE MONTH AFTER THE basketball season had ended, O'Brien whirled around the high-ceilinged banquet room at Good Time Emporium, a mega-arcade in Somerville near the Charlestown line, as the players and their families took their seats. When O'Brien, dressed in a navy suit, called up the players one by one to collect their rewards, an assistant coach first handed them each a large black trash bag. They needed the bag to carry their haul of sweat shirts, T-shirts, sweat pants, jackets, gym bags, framed photographs, and lacquered plaques.

O'Brien knew the promise of this end-of-the-season extravaganza had been a powerful motivator for his guys when they were slogging through January snow to get to his mandatory Sunday practices. So each year, he tried to top himself in the scope of the swag he handed out. When the trash bags were sufficiently stuffed, he turned things over to longtime assistant coach and powerful motivator Zach Zegarowski, who bounded to the podium. Gesturing strenuously with his wiry arms, Zach cracked a few jokes about some of the players and then got serious, talking about how O'Brien had spent the last month going here, there, and everywhere to get the gifts just right. "Boston may not understand and appreciate him, but he gives so much of himself," Zach said. "Don't take it for granted." As he began to relate what O'Brien had meant in his own life, Zach broke down. Unable to finish the thought, he put his head down on the podium and cried. Instinctively, the players began to applaud. Someone yelled, "That's arrright, Z! We're with you!"

That pattern - a speaker delivering a series of upbeat comments before dissolving, suddenly, into sobs - would be repeated all afternoon as the senior players took turns at the microphone. Ricardo "Robby" Robinson, who had been orphaned at 15, did it when he talked about Ridley Johnson taking him in when he needed a place to live. Ridley did it when he talked about how much strength he drew from Robby. George Russell did it when he talked about his friendship with Lamar "Spot" Brathwaite. As a tearful George rested his head on the podium, Spot stood up, walked to the dais, and threw his arms around George. Their hug lasted for more than a minute, as the crowd thundered its applause.

Still, no one was quite prepared for Hood's performance. His talk - which he delivered without so much as a note - had rhythm and range, as well as raw emotional power.

He talked about how he was able to get close to LeRoyal Hairston, a sophomore who lived in the Orchard Park project, solely because of the Charlestown basketball program. Under any other circumstances, Hood, who lived in Academy Homes, would have hated LeRoyal, and vice versa, simply because they came from rival Roxbury projects. " But we could become friends because of the team. I could go to OP because I was with him."

He moved on to Tony Lee, the captain of the previous season's squad who was now a freshman in college, a former rival with whom he had once stood on top of a car in Mission Hill throwing punches. "He was the first person I ever met in life that was exactly like me," Hood said. "We both come from rough backgrounds. We both changed our lives. There was a time when we were ready to beat people up together, when we ran from the PO-lice together." That line drew a big laugh from the crowd, but Hood started to cry. Applause wafted over the room, steadying him.

When Hood started talking about his father, Willie smiled broadly. "Growing up, I used to like to hang outside, hang with the crowd," Hood said. "Everything that my father tried to tell me used to never go in my head. Now that I've grown up, I realize that a lot of that stuff he was telling me, if I'd used it, I'd probably be in better shape." He said he was just grateful he learned his lesson in time, unlike his cousins and older friends who never got the chance to turn their lives around. "I watched people die. That's what made me want to change." Now he was trying to be a role model for his younger brother and the other kids who were struggling in his neighborhood. "I know where the life of people who don't listen can lead to."

Hood looked out into the crowd and locked eyes with his mother. Since the cancer surgery on her lungs, she was easily winded, but today she looked buoyant. "Sometimes I wake up, and the first thing I hear is my mother swearing," Hood said, drawing laughs. "Sometimes I be sitting alone, and could never imagine going through life without her. She brought me into the world, and she taught me a lot. The courage she shows every day going through life teaches me the same courage. One of the main reasons that I want to go to college is a lot of people believe I can't do it. Doing it could be one of the greatest gifts I can give back to my mom."

He wasn't about to let that opportunity go by. He had signed with Adelphi.

He thanked assistant coaches Zach, Steve Cassidy, and Hugh Coleman. As a former Charlestown player, Hugh could relate to what the guys were going through because he'd been through it before. "Hughie gave us a lot of speeches. Those speeches be long," he said, as the rest of the guys erupted in laughter. "Sometimes he talks straightforward; sometimes he talks the other way, and you just gotta shake your head like you know what he's talking about. But believe it or not, a lot of us think that what he told us saved a lot of lives."

Finally, he got to O'Brien. "Freshman and sophomore year, I thought Coach was, like, a pain. He talked to us a lot, called us a lot. But junior year, I started to respect Coach as a person and a coach. Not many people call you during vacations, want to know how things went, try as hard as Coach did to make sure we're doing the right things in school, make sure we're becoming good people. Senior year," he said, welling up but steadied once more by applause, "Coach didn't want to kick people off the team. But he understood that if everybody's goal is not the same, there's no way the team can focus."

He finished by addressing the younger guys whose team it would be next year. "Don't stop now," Hood said. "Keep pushing, keep working hard. Become better students, basketball players, and people. Keep walking that straight line." To anyone who would try to get them off track by questioning what they're doing, Hood said, "You gotta remember, those who mind don't matter, those who matter don't mind."

EXACTLY ONE WEEK AFTER HOOD HAD mesmerized the banquet crowd, one of the school cops stationed at Charlestown High tracked down O'Brien. The cop received a regular report of overnight incidents involving high school kids, and that morning's fax contained a name he was sure would pique the coach's interest. "You gotta see this," he said.

O'Brien's eyes froze on the name: Jason White. The incident, involving a busted windshield, seemed relatively minor - the kind of screw-up that was routinely swept away for suburban athletes. But the coach knew the margin of error was much narrower for an inner-city kid like Hood. Still, even O'Brien wasn't prepared for where this would lead.

This is an excerpt from The Assist: Hoops, Hope, and the Game of Their Lives, a new book by Globe Magazine staff writer Neil Swidey. Reprinted with permission of Public Affairs. For more information, visit theassist.net.