THIS STORY HAS BEEN FORMATTED FOR EASY PRINTING
the medical issue

It's a young scientist's dream come true: $1 million to spend on your research passions. Gulp. Now what? 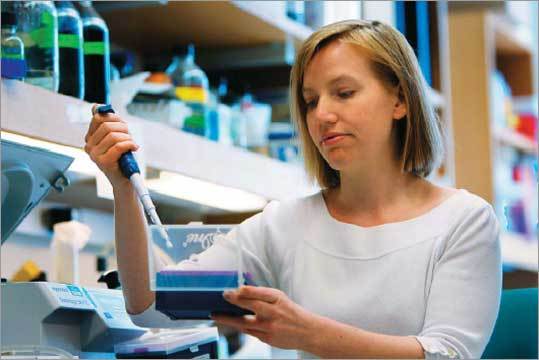 This summer, Amy Wagers, a 34-year-old assistant professor of pathology at Harvard Medical School and investigator at the Joslin Diabetes Center, was one of five recipients of the W.M. Keck Foundation's annual Young Scholars grant. We asked how she would spend the $1 million. Her answer, in her own words:

A million dollars is transformative for a lab that's just getting started. And the nice thing is the money is spread out over five years, so it gives us a lot of stability in that we can plan long-term experiments and ask important questions.

The fundamental question in the grant is how stem cells become defective in old age, and how we might be able to prevent or reverse that. The observation we've made in mice is that old muscle doesn't get repaired well, but if you rejuvenate the stem cells, the injury gets repaired. The obvious reason you might want to accomplish that is to allow you to have healthy tissue late in life for a longer period; but also in the immune system there are defects that reduce immune function and increase the prevalence of certain kinds of cancer. Our hypothesis is that this is due to defects that accumulate in the stem-cell population.

All our work so far has been done in mice. We're using them to manipulate different cell populations in the body and ask whether the expression of genes in the stem cells and the cells that surround them changes how stem cells act when they're old. We inject mice with younger blood factors to see how the cells will react to them, and we also want to do a reverse experiment and place old factors in young mice. We're hoping this will allow us to come up with candidate treatments for adding or blocking a signal to tell an old stem cell, "You're not actually old. Act like a young stem cell."

We want to learn whether there are common regulators of stem-cell function in both blood and muscle, and perhaps other tissue as well. So as we get older, is there one signal that says "You're old" that affects all of your stem cells, or are there different signals that independently tell different stem cells when they're old? At least in mice, we see a lot of problems and changes in stem cells coming up at around the same time, which argues that there may be a global signal. We've built up a lot of information on what controls stem-cell function and have some candidate genes that we think might control the physiological process involved in this.

We all kind of accept the fact that as you get older, things don't work as well, but why is that the case? Is it necessarily the case, or can we set up a system where you can have healthy function for a longer period? These are some of the questions we want to explore.