It Makes You Sick!

You eagerly shared your medical peeves, and now Miss Conduct is here to make it all better.

In my "Miss Conduct" column I asked readers to send me their most pressing concerns in dealing with medical professionals (thanks to all of you who did!). Here's some advice on the major issues you wrote in about.

Can we be on a last-name basis?
Your number-one complaint is being first-named by doctors - especially those who are younger than you. The doctors I spoke with unanimously decry this practice and agree that patients who prefer to be Mr. or Ms. So-and-so should say so. "I would be more comfortable if you called me Mr. Jones" is the locution they recommend. They generally advise against first-naming your doctor in return as being unnecessarily snarky.

Where'd she get that bedside manner?
"The variety of personalities in medicine is as broad as the general population," notes Dr. Richard T. Lee, a cardiologist at Brigham and Women's Hospital. "So you are likely to run into a doctor who says something that rubs you the wrong way." Indeed. Many of you wrote in to complain about doctors with poor patient-relations skills. What to do?

Dr. J. Wesley Boyd, an attending psychiatrist at Cambridge Health Alliance, recommends objective, calm responses such as "Is there any way you can reframe that question?" or "What you've said is offensive to me." Dr. Celeste Robb-Nicholson, an internist in Internal Medicine Associates at Massachusetts General Hospital, says, "If you prefer not to discuss this in the middle of an office visit, you could write a letter describing your reaction to the doctor's comment that you found insensitive." Dr. Peter Greenspan, a pediatrician and associate medical director for primary care at Mass. General, notes that working through this kind of relationship problem can bring a doctor and patient closer together.

This advice is based on the assumption that the overall doctor-patient relationship is a healthy one. But what if it is not? Boyd reports hearing stories of doctors becoming angry when confronted about their behavior by patients. If you fear your doctor might react this way if approached, then don't have the conversation during an office visit. Instead, write a letter afterward not only to the doctor but to the clinic chief. And if necessary (and possible), change doctors. Don't let the aura of medical authority keep you from trusting your own instincts. "I think a lot of times people stick with their doctors way too long," says Lee. "There are a lot of rude doctors out there. If you've got one, it's time to switch."

Did he really have to ask that?
People expect their doctors to ask them questions about medication, exercise, and diet. But why on earth do they need to know whether you have throw rugs or wall-to-wall carpeting? Not, as it turns out, because they were forced into medicine by cruel parents who did not support their love of interior design. Rather, it's because for patients of a certain age, throw rugs can pose a real danger for tripping and falling.

Doctors ask questions that relate to safety as well as health, a fact that may surprise patients. And many illnesses have odd symptoms or causes that can lead to correspondingly odd questions, as well. If you're not sure why a doctor needs to know something, it's perfectly fine to ask.

Why the long waits?
In most practices, doctors are under pressure to schedule visits for 10 or 15 minutes, which is often not enough. Some practices also routinely overbook, because a certain percentage of patients will be no-shows. And there are emergencies. These may be physical - a patient needs to be admitted to the hospital, say, which is a time-consuming procedure. Or they may be emotional. If a patient admits that he or she is struggling with addiction or an abusive relationship or the loss of a family member, a caring doctor is not going to reply, "Too bad, time's up."

So what can you do? When you make appointments, try to get them at the beginning of the session (morning or afternoon), before all the big and little emergencies and inconveniences have had the chance to snowball into a 45-minute wait. On the day of your appointment, you can sometimes call the practice, or ask at the desk when you check in, if the doctor is running on time. And if you know you will need an appointment in advance (if the doctor says, "Check back with me in three months," say), make that appointment as soon as possible. Patients who need to be seen by a certain date but aren't otherwise urgent, are at risk for being double-booked.

And whatever you do, don't take it out on the clinic staff. It's not their fault and being unkind to them won't make things go faster. The long wait times to get to see a doctor at all, and in the waiting room once you're there, are the result of structural factors, not individual rudeness.

How can I make my visits most productive?
Write down the symptoms, questions, or issues that you want to discuss with your doctor. This will help your memory before and after the session, and will empower you in your discussion with the doctor. And prioritize your questions - the doctors I spoke to pointed out that no doctor can handle more than three to five issues in a single visit. If you can get blood work or other lab tests done before your visit, then "when you see the doctor you'll have a much more advanced conversation," according to Dr. Somava Stout, the medical director of the Revere Family Health Center. And when the visit's over, ask your doctor how you can get any follow-up questions answered. Is there a nurse or assistant you could call, or could you e-mail the doctor?

Robin Abrahams, a Cambridge-based writer with a PhD in psychology, writes the "Miss Conduct" column in the Globe Magazine. Read more of her medical advice at boston.com/missconduct. E-mail her at missconduct@globe.com. 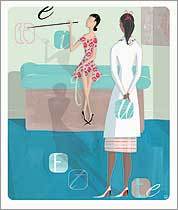