Yes, the media aren't winning public favor these days. But when we limit their freedom, we undermine everyone's.

Anyone who had ever gone through law school - and I count myself among those poor souls - knew instantly that Superior Court Judge Merita Hopkins had gotten it wrong. WHDH-TV (Channel 7) had a scoop: Autopsy results of two Boston firefighters killed in the line of duty showed one was intoxicated, the other had cocaine in his body. Hopkins, the onetime chief of staff to Mayor Tom Menino, blocked the station from airing the story. The legal term for what she did is prior restraint. Ever since the Pentagon Papers case in 1971, it's been (with extreme cases of national security being the only possible exception) a big and obvious no-no.

Presumably Hopkins - who for 11 years was also the city's corporation counsel - knew that as well. But her decision, while legally wrong, may well reflect a new sense of just how far the government can push the press around. The First Amendment, sad to say, is in tough shape.

Hopkins's ham-handed stab at censorship was hardly isolated. Judith Miller of The spent 85 days in jail in 2005 for refusing to reveal sources in the Valerie Plame case. Blogger Josh Wolf last year got seven months in prison because he wouldn't turn over videotape he shot of a protest at the G8 Summit. Reporters for the San Francisco Chronicle almost went to jail for reporting on the steroid scandal. And in Arizona, a district attorney in October arrested two reporters for revealing grand jury information. I'm not cherry-picking here. The well-respected organization Reporters Without Borders now ranks the United States 48th out of 169 countries in terms of freedom of the press. It's embarrassing.

I know. Reporters are obnoxious and intrusive. Maybe, you're thinking, the media deserve a comeuppance. Indeed, after Hopkins made her decision, online comment boards made clear that many agreed with her. And that echoes national sentiments. According to polling by the Pew Research Center, for example, over the last 12 years, Americans have become more critical of the news media. Fewer think the media are moral (46 percent, down from 54 percent), more think they are inaccurate (53 percent, up from 34 percent) and where once a majority thought the press helped "protect democracy," now those who believe so is down to 44 percent.

That last finding is perhaps the most disturbing and reflects a fundamental misconception about the role of the press. Look at the original text of the First Amendment: "Congress shall make no law . . . abridging the freedom of speech, or of the press." There's a reason speech and the press are mentioned together. To the framers, our ability to say what we wanted (that is, speech) went hand-in-hand with our ability to communicate those words to others (using the press). Today, though, the two have become disconnected. Freedom of the press now seems like a special privilege that applies not to us but to distant, powerful, and impenetrable corporations.

Admittedly, the growth of big media - first, newspapers, later, radio and television - makes this thinking easy. Yet technology is changing that. Anyone with an Internet connection can now not only be a reporter, but a publisher as well (blogs and YouTube being obvious examples). Increasingly, media are becoming more democratized - and more like what the Founding Fathers envisioned.

This plays into the debate in Washington over a so-called shield law to protect journalists from revealing sources. Part of the debate involves this question: Who is a journalist? Someone for whom reporting is a full-time profession? Someone working for an established media organization? Or anyone?

I think it should be anyone. If you report, investigate, or opine - even part time - then you're doing journalism. That's not to say that every blogger's work is necessarily as good as that of traditional news organizations. There are huge advantages to having training, editors, a code of ethics, and the resources to be able to dig deeply into a topic. But the First Amendment was never designed to protect only professionals. It was designed to defend everyone's ability to communicate. And that's what so worries me about the Merita Hopkinses of the world. When they take on the First Amendment, they're not just striking a blow at some well-coifed talking head on a TV newscast. They're going after all of us. 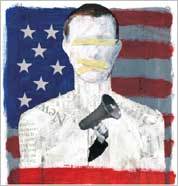