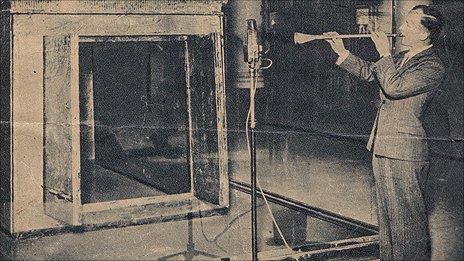 No one knows how well-used the trumpets were during King Tut's reign, but they've had a very busy twentieth century. On April 16th, 1939, after three mute millennia, the trumpets were finally played by James Tappern, a British bandsman, during a BBC radio broadcast from the Cairo Museum; it was heard by millions of listeners around the world. Then, this year, one of the trumpets was stolen during the Egyptian uprising, only to be found, the BBC reports, "with other Tutankhamun artefacts in a bag on the Cairo Metro." It goes without saying that the trumpets are cursed: they're decorated with martial symbols, and are said to be able to loose the dogs of war. England entered the Second World War on September 3rd, 1939, only a few months after they were sounded by bandsman Tappern. Moreover, according to the Cairo Museum's Tutankhamun curator, one of them was blown by a member of the staff a week before the Egyptian revolution began.

Since Carter's time, many other ancient instruments have been found; nowadays they can be computer-modeled, rather than played (and potentially damaged) by real musicians. A group of musical archaeologists calling themselves the "Lost Sounds Orchestra" have recreated the sound of the epigonion (the lyre you see on the side of Greek vases) using digital technology, and have even constructed a "laser epigonion" which they can perform onstage. There's something to be said, though, for hearing the original instruments. Even playing a tune improvised by a very nervous British trumpeter, they sound otherworldly.

Listen to the BBC's "Ghost Music" here -- or watch this fantastic YouTube clip of the late, great Egyptologist T. G. H. James telling trumpets' story. (You'll hear the trumpets themselves about ten minutes in, but the whole clip is absolutely wonderful.)