Political science isn't really a science at all - it's more like a collection of disparate and even contradictory world-views. Daniel Drezner, a professor of international politics at Tufts' Fletcher School of Law and Diplomacy, has hit upon the perfect way to weigh those world-views against one another: in his new book, he asks how each would predict the international response to a plague of the undead. 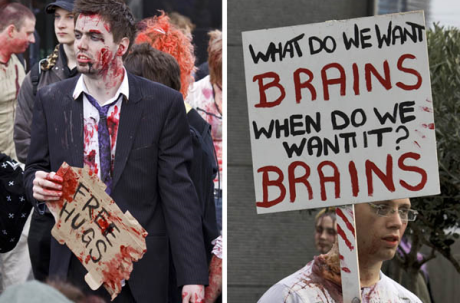 The book is Theory of International Politics and Zombies (you can read the first chapter here, and the original Foreign Policy article as well), and in it Drezner asks: "What would different theories of international politics predict would happen if the dead began to rise from the grave and feast upon the living? How valid - or how rotten - are these predictions?" After a brief survey of the zombie literature, Drezner walks us through the different schools of political-scientific thought, explaining how a post-zombie world would take shape according to realism, liberalism, neoconservatism, and constructivism, as well as through the lenses of domestic politics, organization theory, and psychology.

Foreign-policy realists, for instance, argue that all that really matters in international affairs is power. From their point, of view the world wouldn't really change at all if zombies attacked: strong countries would survive, and weak ones "suffer devouring by reanimated, ravenous corpses." The realist point-of-view turns out to be strangely suited for thinking about the zombie apocalypse. But the same goes for foreign policy liberalism, which puts its faith in international institutions. Liberals, Drezner writes, would almost certainly see the zombie hordes as "a classic negative externality problem of economic globalization.... A coordinating body, perhaps even a World Zombie Organization (WZO), would need to be formed in order to handle all of the overlapping health, trade, and security issues." (Neoconservatives, for their part, would claim that "the zombies hate us for our freedoms - specifically, our freedom to abstain from eating human flesh.")

Ultimately, none of the foreign policy frameworks do a particularly good job of responding to the zombie attack: they're all, Drezner points out, "state-centric," whereas a zombie horde is a "non-state actor," much like the other twenty-first century problems that our international order is now straining to confront (think climate change, financial panics, and terrorism). At the same time, the detail with which Drezner can apply international political theory to the zombie apocalypse is striking. The frameworks are so flexible that they can explain and accommodate any problem, no matter how outlandish or novel it is. That seems to be the point: today's foreign policy frameworks, outmoded as they may be, can still appear useful. They're the real walking dead.