How one word developed a split personality 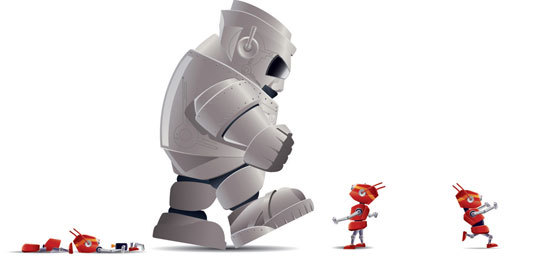 TO ME, ONE of the best things about being an English speaker is affixes - those little additions before or after the root of a word that can transform its meaning. Our language allows us to be almost endlessly creative in how we combine and recombine words and word parts. Take the case of the two affixes robo- and -bot: two sides of the same word, but with very different effects. Compare the roboturtle (an engineering project described as “an agile and aggressively maneuvering biomimetic autonomous underwater vehicle”) with turtlebot (a homebrew robot kit that “can explore your house on its own!”)

The word robot, in the sense of a machine capable of independent action, was ushered into the language in 1920 by the play “R.U.R.: Rossum’s Universal Robots.” According to Karel Capek, the play’s Czech author, his brother Josef suggested that he take the word from the Czech robota (meaning “forced labor” or “drudgery”) rather than create a word from a Latin root. (According to the Oxford English Dictionary, the word android, “an automaton resembling a human being,” is nearly 200 years older.)

But in the 90-odd years since we’ve had the word robot, it’s undergone a personality split into two different affixes, robo- and -bot. This isn’t surprising - there’s a language-learning strategy called the “principle of contrast,” which basically means that when we learn a language, we come to expect that two words should never be exact synonyms. Even for words as close in meaning as baggage and luggage, there tend to be definite distinctions in use (for instance, we talk often about “emotional baggage,” but would mention “emotional luggage” only as a joke). So robo- and -bot may have started out as similar affixes, but as new generations of English speakers have adopted them - and expected them to be different - they have drifted apart.

Robo- is the stronger of the two affixes, and it has taken on a slightly more menacing air. Compounds with robo- tend to focus on qualities of strength and unstoppableness - for good or ill. Although the Robocop of the 1987 movie of the same name was a hero, later references to robocops have focused more on the supposedly dehumanized nature of over-armored police. Robocalls, those auto-dialed nuisances, inexorably interrupt you during dinner, and the calls used for negative political campaigning are sometimes called robo-slime; robo-polls are calls used to conduct scientifically questionable surveys. Robo-trading, using algorithms to automatically buy and sell stocks and securities, was widely blamed for last year’s “Flash Crash,” when the Dow Jones industrial average dropped more than 600 points in five minutes. And the outcry over robo-signers, mortgage-company employees who signed thousands of foreclosure documents without looking at them, led major banks (including , , and ) to temporarily halt foreclosures.

Other more-scary-than-cute robo- compounds include the robo-toilet, which, with its motion-activated lid and seat, sounds like an accident waiting to happen; the robotaxi, which has space for two passengers (without bags) but no driver; and the robonaut, a semi-humanoid joint project of GM and NASA, intended to help on both spacewalks and assembly lines. (Why semi-humanoid? The robonaut has no legs.) Even the most innocuous nouns can take on a harder edge when preceded by robo-: In the 2010 movie “Megamind,” Megamind laments that he “had so many evil plans in the works - the illiteracy beam, typhoon cheese, robosheep . . . .”

The suffix -bot, on the other hand, is a bit more cuddly: Think Roomba, not Robocop. Early uses of -bot marked computer programs that automatically interacted with information online, and ranged from helpful to slightly annoying: searchbots to build indexes of webpages, spambots, floodbots (which pushed information where it wasn’t wanted), cancelbots (which removed unwanted information), and chatbots or chatterbots (programs designed to engage in more-or-less human-sounding conversation). These -bots were easy to anthropomorphize, and more or less harmless - unlike, say, an autonomous evil cyborg.

More recently, Twitter has been colonized by a host of twitterbots, little programs that automatically find, create, or send data. Many are annoying and spammy, bombarding the poor souls who happen to tweet about iPads or other hot products with commercial messages. But some are pure entertainment, such as a comedybot, which automatically posts bits from comedians, or @EinsteinBOT, which autotweets quotes from Albert Einstein.

Friendlier words seem to be more easily suffixed with -bot. There are guidebots and guardbots, helpbots and healthbots, medbots and newsbots, shopbots and teachbots. The chalkbot writes inspirational messages in chalk on the roadway; the dustbot is an “on-call robotic rubbish collection service” being tried in Italy. The suffix -bot is also popular in product names - there’s Jambot (musical software), Kegbot (a beer dispenser that tracks how much you’ve consumed), and Wattbot (which helps you figure out whether you can save money through renewable energy sources). Dorkbot is an organization for those interested in electronic art; Makerbot is a company that creates 3D printers - which can also make parts for more Makerbots.

The scariest -bot may be the fembot, encompassing the evil-but-hot fembots of Austin Powers, ads for Svedka Vodka, and the Robyn song that insists that “fembots have feelings too.” Why don’t we call them robo-femmes? Because they’re still more sexy than scary: thus the -bot suffix.

So what happened to make robo- take the aggressive path and -bot the cute and friendly one? Other words that have split into prefix-suffix pairs have clearer rationales for their separate meanings: Alcoholic’s more common -holic suffix is used for any addiction, with alco- reserved for things related to alcohol, such as alcopops (alcoholic drinks that taste like soft drinks) and alcolocks (devices that disable a car’s ignition if the driver has had too much to drink). More commonly, though, it’s only the less-specific tail end of a word that goes on to a productive life as a suffix: the -thon of marathon, the -naut of astronaut, the -gate of Watergate.

Perhaps it’s because robot’s two syllables are equally meaningful (or meaningless) that we can get two different affixes out of it: -bot, as a suffix, acts more like a cute diminutive, like -let or -ling, while robo-, as a prefix, behaves more like a menacing intensifier, like mega- and uber-. Either way, at this point, the divergence looks as if it’s here to stay - and is almost, dare we say, automatic.

Erin McKean is a lexicographer and founder of Wordnik.com . E-mail her at erin@wordnik.com.