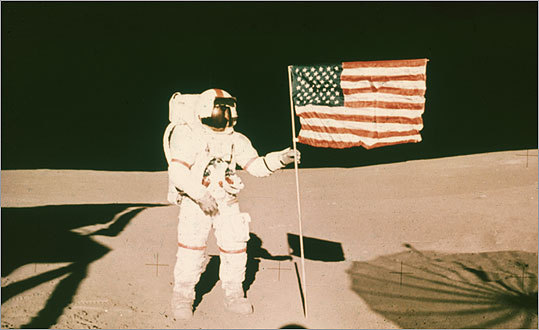 If you were to visit the moon today, in the neighborhood of the Apennine mountain range, you would find a small figurine, about the same size and shape as a Lego minifigure, lying facedown in the lunar dust. Unauthorized by NASA, this “Fallen Astronaut” sculpture was placed there exactly 40 years ago this past week by astronauts David Scott and James Irwin of Apollo 15, and sits alongside a tiny plaque listing the names of 14 astronauts and cosmonauts who had died during their time in their respective space programs.

This haunting miniature memorial is only one of the many artifacts and messages that human beings have deliberately sent into space, or left there, as a symbol of our presence. On Earth, most of human history has involved unconsciously leaving traces of our existence, from garbage to aqueduct ruins. But when we go into space, we can begin to make choices about what we leave to posterity.

Even in space, where none of us live, some of what we’ve left is space junk: stuff orbiting the earth that nobody particularly intended to leave anywhere. But much of what we’ve left in space is intentional. Some of it is symbolic artifacts intended for an audience of people here on Earth - the fallen astronaut, the American flag on the moon, a CD containing a list of over half a million people who wanted to send their names to a comet, courtesy of a NASA probe. In some cases, however, we are also sending a deliberate signal out beyond Earth, to be received by forces unknown. Rather than just listening for radio signals, which has been a staple of the Search for Extraterrestrial Intelligence, some earthlings have become interested in actively reaching out - broadcasting radio messages to anyone, or anything, out there that might be able to hear them.

For reasons that are perhaps obvious, these are controversial projects. Advocates contend that sending out signals can catalyze our own thinking about detecting extraterrestrial intelligence, while also forcing us to think about humanity’s legacy. In what has become a boisterous debate, however, many scientists, including such eminent scholars as Stephen Hawking, have lately argued against elaborating our human signature. To advertise our whereabouts to strangers, they say, with unknown motives and capabilities, is highly dangerous. Terminating any messages from Earth is a far safer path.

Whether you agree or disagree with sending out messages, there’s no question we’ve sent out a lot already, both intentionally and unintentionally. Any creature looking at Earth from outside would already have quite a bit to reckon with. So, what does our signature look like? If one were to cast a net around everything anthropic, everything humans have broadcast outward about themselves, what picture of Earth would emerge?

On the moon alone, we’ve left many traces. The biggest objects we’ve left include robotic landers, lunar rovers, leftover portions of the Apollo lunar modules, and even crashed probes. Smaller, but with significant symbolic weight, are a number of plaques and memorials on the lunar surface. Each Apollo lander has a plaque, including Apollo 11’s “We came in peace for all mankind.” There’s the “Fallen Astronaut” memorial, and there is probably (because it’s never been confirmed by a photograph) something known as the Moon Museum - a tiny wafer of less than a square inch left by Apollo 12, containing artwork by six of the leading artists of the day (Andy Warhol, Robert Rauschenberg, John Chamberlain, etc). And don’t forget the two golf balls that Alan Shepard hit on the surface of the moon. The message of the moon, in short: We’re peaceful, we care about those who die in the line of duty, and we love pop art.

But the moon is still quite close to home - if you’re close enough to examine the moon, you’re basically visiting Earth already. What about what’s been sent beyond our solar system? When it comes to physical artifacts, there is far less to see. In fact, we have only sent two pairs of objects beyond the planets: the twin sets of Pioneer and Viking probes. Both of these contain deliberate messages meant for the stars. New Horizons, a probe currently en route to Pluto, will also eventually leave our system, but, sadly, it does not contain a message.

Pioneer 10 and Pioneer 11, launched in 1972 and 1973, were the first two probes to be sent to the asteroid belt and the planets beyond. Each has a golden plaque attached, a bit smaller than a single sheet of paper. These plaques contain information about humanity: our location in time and space, and a bit about us. Our location in the galaxy is indicated in relation to pulsars, extremely dense spinning and pulsating neutron stars, and the information about us consists entirely of a naked man and woman, with the man’s hand raised in what will hopefully be interpreted as a gesture of friendship.

When Voyager 1 and Voyager 2 were launched in 1977, the nudity of the Pioneer plaques wasn’t repeated (apparently there had been some criticism), and this time a golden record with recordings of the sounds of Earth, broadly construed, were included, along with a needle, cartridge, and instructions on how to play the record. From crickets and Chuck Berry to Mozart and greetings in various languages, the Voyager records attempt to survey the soundscape of Earth. But the records also encode images, such as photographs of our planet and diagrams about basic math and science. Though many people have found the notion of “Johnny B. Goode” going to the stars irresistible, the encoded sample of then-current human knowledge would surely be equally revealing.

The 1970s was a golden age for elaborating our cosmic signature. In addition to the Pioneer and Viking messages, the decade brought the first radio broadcast meant for those outside our solar system. In 1974, the Arecibo radio telescope was changed from a receiver to a transmitter, and a simple, mathematically based message was sent to a dense cluster of stars about 25,000 light-years away. This message, properly decoded, shows a crude human form, the Arecibo dish, the double helix of DNA, and a little more scientific information. However, it is extremely rough. One expert in computational neuroscience even demonstrated how an early version of this message, turned upside down, could fairly easily be interpreted to depict humans as six-legged creatures with large brains and possible hands on our forelegs.

In about the past 10 years or so, there has been a flood of newer messages from large radio telescopes, many in the former Soviet Union. These range from messages from schoolchildren to a small collection of encoded information about life on our planet that has been called an Interstellar Rosetta Stone. The missives have even included a commercial for Doritos, broadcast to a star 42 light-years away.

What does all this mean? No doubt our messages, if interpreted correctly, could generate a picture of humans as bipedal and carbon-based. Alien life forms might even detect our obsession with Doritos. But for all the work that goes into these plaques and messages, does it even matter? Will any of these ever be received?

Certainly, the Voyager and Pioneer probes are unlikely to be encountered at all. These probes are tiny and nearly undetectable, and depending on the probe, they could be spending from thousands up to millions of years in deep space before reaching the neighborhood of any star. Even our intentional radio broadcasts are rare and too focused. Aimed at single regions of the sky, our signals hit only a few star systems before heading to other parts of our galaxy or beyond. And that’s on top of the fact that these signals are terribly brief. If the aliens don’t happen to be listening during the right six-hour window when the Doritos message passes by, they’d miss the commercial entirely. (Which might not be a bad thing.)

If anything, outsiders are more likely to encounter our unintentional traces: constant, everyday television and radio broadcasts, the informational equivalent of space junk. With these messages, we get far less of a chance to tailor our self-portrait to hypothetical alien interests; on the other hand, they might reveal more of our true nature. With our own technology, however, many of our television broadcasts are far too weak to be detected beyond our solar system. The most easily visible signals to extraterrestrial receivers are certain strong radars, such as military ones, that emit high-powered beams to detect airplanes.

It is hard to estimate the technological capabilities of extraterrestrials, but many scientists feel that detection of any messages from Earth is highly unlikely. Nevertheless, if aliens do have equipment sensitive enough to “notice” Earth, the message is likely a far cry from those carefully crafted records of peaceful noises and scientific data, and also from the ceremonial gravity of a tiny statuette. What they’re mainly hearing is regular bursts of radar, punctuated with the occasional canned laugh of old sitcoms.

Samuel Arbesman is a postdoctoral fellow in the Department of Health Care Policy at Harvard Medical School and is affiliated with the Institute for Quantitative Social Science at Harvard University. He is a regular contributor to Ideas. Follow him on Twitter @arbesman.