A look back at a pioneering movement in computer art 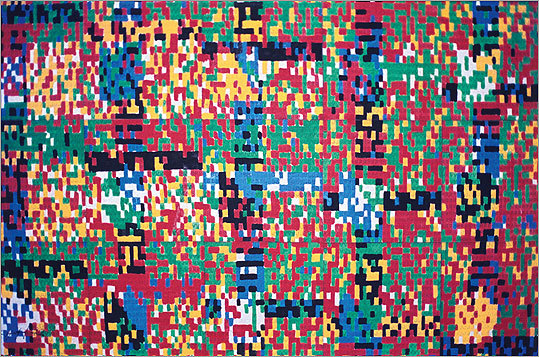 Mesmerized by the otherworldly glow of Vladimir Bonacic’s mysterious photograph “IRB 8-9,” or stunned by the pulsating swirl of Bridget Riley’s dizzying “Blaze 1,” you might not know, or even care, that you are looking at art.

Peering into Helga Philipp’s intricate “B2,” or trying to get your eyes off Walter Zehringer’s hypnotic “Objekt Nr. 1,” you’d be forgiven for overlooking their persistently numerical titles or missing the weird items that keep popping up in their materials. Oscilloscope? ALGOL? Methacrylate? Whatever those things are, they don’t sound much like art supplies. And if you fail to recognize the artists’ names - even memorable ones like Marina Apollonio or Dieter Hacker - don’t worry. That was part of the program.

From 1961 to 1973, a loosely organized group of artists and scientists coalesced around the radical idea that the emerging technology of the computer could be used to make a different kind of art. Known simply as the New Tendencies, this heterogeneous movement included dozens of men and women from the far reaches of the industrialized world. Often working under collective monikers such as Equipo 57 or Grupo Anonima, most of them were as ambivalent about individual fame as they were about the artistic status of their activities, which they preferred to call “research.”

However they saw their own work, their visual innovations were quickly recognized as cutting-edge art, and in a matter of years began appearing in landmark exhibitions at venues such as the Louvre and the Museum of Modern Art in New York. Almost as quickly, however, these early experiments were overtaken by what they made possible, and the idealistic foundations of computer art got hidden beneath the more elaborate operations that followed.

Fortunately, this pioneering work has now been beautifully collected in a hefty book from the MIT Press, “A Little-Known Story about a Movement, a Magazine, and the Computer’s Arrival in Art: New Tendencies and Bit International, 1961-1973.”

It’s hard to predict how history will judge artists that we have already managed mostly to forget, but confronting their work half a century later gives us a unique and bracing glimpse at our early interactions with a now-ubiquitous technology. Seeing these artworks and writings today can sometimes feel like looking at your own baby pictures, or even your own ultrasound. Certain details are strangely familiar, but it’s the unrecognizable aspects that really give us pause. Looking at the first instances of computer art, you can’t help but wonder: Was that how the whole thing got started? Is that really us?

Curiously, the first worldwide movement of computer art focused many of its forward-thinking activities in a city not particularly known for technology, in a country that no longer exists. Beginning with the 1961 New Tendency exhibition mounted by Matko Mestrovic at the Museum of Contemporary Art in Zagreb, hundreds of artists, critics, and curators started gathering regularly in what was then Yugoslavia, united in the belief that you could generate visual art using this strange, almost philosophical new machine. Like-minded experimenters flocked from all over Europe, and from as far away as the Americas and even Japan, to organize a groundbreaking series of exhibitions and symposia while also publishing an influential magazine called Bit International.

The computer of the day was a nondescript box following binary commands in a chilly storehouse, still close to its origins in science and the military. It was increasingly finding business and industrial applications, but the New Tendencies artists wanted to take this technology in a very different direction. By encoding a program on punch cards, feeding it through a machine, and getting something surprising in return, they intended to use the computer creatively. They saw it as an exciting way to break decisively out of the era’s many arbitrary and oppressive habits.

Emphasizing abstraction, universal accessibility, and pristine geometry against the art world’s previously enshrined values of representation, personal expression, and manual skill, they hoped their new way of making art would stand in stark contrast to the cultural conventions of the moment and serve as a rebuke to its variously misguided ideologies. For a remarkable 12 years, Zagreb provided an environment where this multifaceted idea could evolve and flourish.

In many ways, the New Tendencies movement now feels like it happened in a vanished world. To fully understand the intentions of early computer art, one has to recall the ominous divisions of the Cold War, the tenets of abstract expressionism and socialist realism, the singular figure of Marshal Josip Tito ruling over a unified Yugoslavia, and numerous other phenomena which have all disappeared since the 1960s.

Oddly however, nothing in this story is as unrecognizable as the one protagonist who is still very much with us. Rumored to be gigantic, this computer the artists keep petitioning lives in near-monastic separation from the world and its concerns. Often located in another country, it is evidently very discreet: Upon receipt of carefully premeditated commands, and after a specified waiting period, the computer will produce an object, which can then be sent back to the programmer. The artists are at pains to emphasize how it usefully ignores their whims and emotions, their nationalities and religions, resolutely speaking its own language(s) and allowing them to approach it with exclusively abstract questions. They cherish its capacity for randomness, its total remove from current events and commerce. What they fundamentally like about the computer is that it slows them down.

Like remembering that afternoon when e-mail was a charming novelty, or picturing the giddy lab coats gathering around a room-sized calculator, the story of the New Tendencies movement achieves an unintentional, almost vertiginous comedy because the early adapters have no idea what’s in store.

Nowadays, of course, everyone wittingly and unwittingly uses numberless computers, and for artists, it is only a question of degree. Works made by other means - paint on canvas, for example, or old-fashioned film photography - still depend on computers for dissemination via jpegs, for publicity on websites, and for storage in digital archives. Other art more directly employs various computer technologies, but the practice is so routine that artists rarely draw attention to the fact. It has been a long time since we called something “computer art” just because it was made with a computer. Indeed, for the term to mean much today, it would have to denote art that is explicitly about computers.

In five fast decades, art’s conspicuous new machine has become its only pervasive medium, serving not just as a technical lingua franca in a mixed-media age but also as a unifying subject matter for an increasingly diverse gallery audience. In fine art alone - not to mention video games, digital movies, or the sundry crafts of social networking - the computer simultaneously offers itself as vast and recognizable content while also providing us the perfect means with which to depict it.

Examples of this digital reflexivity are everywhere, and nowhere so neatly summarized as in Cory Arcangel’s current exhibition at the Whitney Museum of American Art in New York. At 33, Arcangel is the youngest artist to command an entire floor of the museum, and his show opens with a history of bowling video games in which all the versions - spanning from 1977, with the Atari 2600, to Nintendo’s GameCube from 2001 - have been reprogrammed to throw only gutter balls. His signature piece, “Super Mario Clouds v2k3,” is a wryly reconstructed version of the iconic video game, where everything has been removed, except the clouds and the blue sky. Another project, “Sorry I Haven’t Posted,” is a blog consisting entirely of other bloggers’ excuses for not blogging. Of course, these punch lines utterly depend on our familiarity with the pixelated universe, displaying an encyclopedic, winking attitude which contrasts tellingly, and somewhat depressingly, with the wide-eyed, almost mystical experimentation that went on in Zagreb.

Because our lives are now so thoroughly entwined with computers, it’s tempting to just weave the New Tendencies art right back into our own high-tech existence. Perusing the yellowing printouts of randomly generated geometries, it’s natural to think: Hey, this would make a really cool desktop! But even though you may want to download a Dadamaino screensaver, or invent a Hiroshi Kawano app that will custom design you some wallpaper, simply enjoying the retro eye candy means missing the deeper pattern.

Part of what now hovers hauntingly inside these works is the relationship between what they hoped the computer would do and what it has ended up doing. Even while writing this, I sometimes felt the New Tendencies pioneers would be ecstatic to peek over my shoulder as I cut-and-pasted their manifestoes on my laptop or clicked through their bios on the Web. More often, however, I sensed a gap that was both vast and fearsome to describe. Peering into the age before computers is already tricky enough, but the New Tendencies art shows us something more disorienting: a time when the computer offered total respite from the political, the commercial, the social, and the everyday.

Dushko Petrovich, a painter and critic, teaches at Boston University and is a founding editor of Paper Monument.