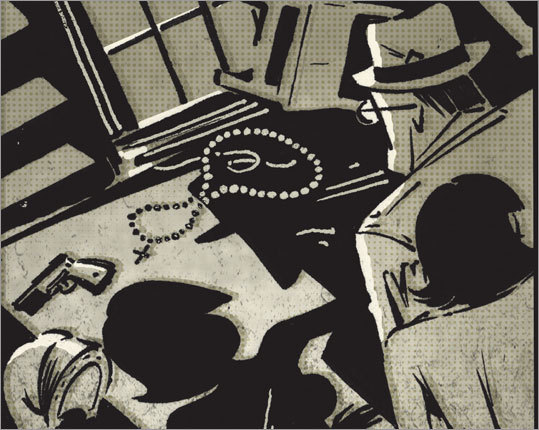 Earlier this month the Grand Hyatt New York hosted ThrillerFest, a four-day celebration of a literary genre that has produced such modern-day classics as “Attack of the Fiend’’ and all 72,000 novels by James Patterson. A highlight of the festival was the awards ceremony for the nation’s top first-time thriller writers, a set of people whose incomes can soon expect five or six new zeroes.

Could this be you? Writing a psychological thriller might sound hard, but the fact is that anyone who has dreamt of peeling the skin off the skull of a neighbor with the rusty blade of the lawnmower he insists on dragging across the yard every Sunday morning could do it. Follow these simple instructions, and you will produce a psychological thriller that will leave readers feverishly turning the pages until the final horrifying showdown (see “What you will need,” below).

What you will need:

• A blurb from Stephen King

1. The most reliable benchmark of good thriller writing is the speed with which you excite your reader’s gag reflex. So get to your Maniac quickly, in the midst of an unthinkable act - stuffing a chicken into a duck, the duck into a cheerleader, then popping the lot into a pre-heated oven. The perpetrator - we’ll call him Cheerducken - should be wearing nothing but a sheen of acrid sweat.

2. The Hero Introduce Tom Hardhart: loner, divorcé, detective. He will arrive at the crime scene with a hangover. The carnage makes him remember the harrowing case from five years ago in which his partner died. A CSI technician tweezes something from the rear end of the chicken: a kitten. Looks are exchanged.

3. The Love Interest Also at the scene is Sarah Lovell, an investigator for the medical examiner’s office. Short but shapely, Lovell will be assigned to work with Hardhart on the case. His resentment will give way to physical attraction, and then respect. She knows tae kwon do.

4. Cat-and-Mouse The crimes should escalate in frequency and depravity. A Boy Scout stuffed inside a nun stuffed inside a racehorse, etc. Hardhart stays up night after night trying to discern a pattern. The killer is intelligent and organized; he doesn’t play by the rules. He sends Hardhart a gift: “The Mammoth Book of Sudoku.’’

5. Extras A mayor who wants answers and wants them now; an unscrupulous reporter who tries to contact the Maniac and gets a spike in the eye for his troubles; an unctuous but darkly handsome neurosurgeon who has started courting the Love Interest; Hardhart’s 5-year-old niece, who will utter the line, “What you doing, mister?”

6. The Raison Provide occasional, italicized insights into the Maniac’s tortured psyche. As he looms over a victim in a dank urban basement, he will recall an incident from his childhood: Thanksgiving . . . Such a lovely day . . . Tra-la-la . . . Then walking into the kitchen . . . Seeing his mother with her hand inside . . . Inside the bird!

7. Crisis of Confidence Hardhart visits a dingy tavern, where he brawls with a local loudmouth. He staggers out into the rain, falls to his knees. “Why!” Then it hits him. Dickle, the neurosurgeon: Something’s been bothering him, something about the man’s eyes. He calls Lovell but her phone is switched off.

8. The Horrifying Showdown A doorbell rings. Lovell answers. It’s Dickle, a look on his face. “What do you want?” Dickle falls forward, dead. A noise from the basement. He’s, he’s . . . IN THE HOUSE. Lovell creeps down the stairs. Click. No light. The Maniac moves in, a baster and Barney doll in hand. Hardhart arrives. A scuffle. Gunfire. Silence.

9. Epilogue Flash forward five years. Hardhart is in the den watching football. Lovell is in the kitchen, putting a lobster into a steaming pot. A boy stands in the doorway, staring into the lobster’s bottomless black eyes.

And there you have it: “Stuffed.” All that’s left to do now is to submit your manuscript to the ThrillerFest people, keep an eye on the bestseller lists, and start work on the sequel, which will almost certainly be named "Hot Water."

Chris Wright is a writer living in Spain.