When a number becomes a word 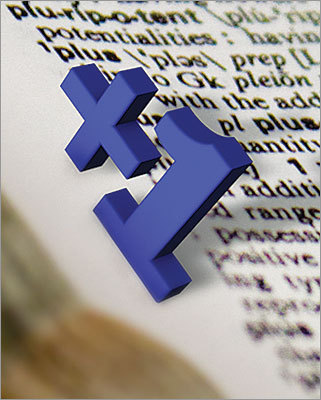 When unveiled its new social networking venture a month ago, the first hurdle for early adopters was understanding the name: Google+. The brain trust in Mountain View could have called it “Google Plus,” but instead they have staked their claim to the plus sign itself (which is, ironically enough, quite difficult to Google for).

In fact, the Googlers had already been making use of the plus sign since March, when they introduced the “+1 button,” their equivalent of the Facebook “like” button. Used as an indicator for an online recommendation, it is, as Google’s announcement puts it, “the digital shorthand for ‘this is pretty cool.’” (Originally, you could “+1” listings in your Google search results; now, Google+ users can also “+1” anything appearing in their news “stream.”)

From the start, Google has been serious about making +1 into a verb, despite it not looking terribly verb-y. Whereas Facebook appropriated a well-established verb with like, +1 presents special challenges for joining the social-media “verbs of approval” club, along with digg, tweet, and favorite.

Well before the Web era, plus one (fully spelled out) could refer to an extra person who accompanies an invited guest to an event. The latest edition of the Oxford English Dictionary has examples of this usage back to 1977. While Google’s +1 might hark back to this earlier style of socializing, the more obvious inspiration derives from online forums and blog comment sections, where +1 came to be used as a quick way to agree with another poster’s opinion.

Converting the commenter’s informal thumbs-up into a standardized visual metaphor clearly involved a fair amount of thought from the Google team - including thinking through how this new activity could compete with Facebook’s “like” as an English verb. Google went so far as to include a page on “+1 spelling conventions” in its official documentation.

When a tech company is trying to tell you how to spell, you know something intriguing is happening in the world of language. Google may be wedded to +1 rather than plus or plus one, but if they want it to stick, their millions of users will have to figure out what to do with a “word” that is actually a symbol and a numerical digit - making it devilishly hard to punctuate and inflect.

“+1 is that special type of term that functions as both a noun and a verb,” the page explains. “As a result, all sorts of variants can come up as you’re talking about your favorite way to recommend pages on Google search. To wit: +1’s, +1’d, and +1’ing.” The page also jokingly suggests +1’ier, +1’iest, and +1’tastic, but the verb forms are, so to speak, where the action is.

Let’s consider Google’s verb paradigm. First there is +1’s, which doubles as a plural noun and a singular third-person verb (“Everyone who +1’s my post gets a prize!”) This doesn’t seem too unusual, since the apostrophe is generally accepted when pluralizing numerals, as in “The loaded dice only roll 7’s and 11’s.” Style guides don’t completely agree on this point, however - the New York Times manual of style is pro-apostrophe, while the AP Stylebook counsels that you should leave the apostrophe out.

Things get more interesting with +1’d. At first, the use of ’d to mark the past tense of the verb struck me as peculiar to the eye, but I’ve warmed up to it. As Gabe Doyle, a graduate student in linguistics at University of California, San Diego observed on his Motivated Grammar blog, “apostrophe-d used to be a more general suffix, up until around the middle of the 19th century.” Since the -ed suffix was originally meant to be pronounced as a full syllable - think of such survivors as aged, beloved, blessed, and learned - the version with the apostrophe came in handy in Early Modern English when the vowel sound began to be omitted. (This remained a contentious matter for some time: in 1712, Jonathan Swift griped that “by leaving out a vowel to save a syllable, we form so jarring a sound, and so difficult to utter, that I have often wondered how it could ever obtain.”)

Even though we no longer write “star-cross’d lovers” as Shakespeare did, the apostrophe-d ending still comes in handy on those rare occasions when numerals turn into verbs. In a 1968 New York Times article about the raucous production of Norman Mailer’s film “Maidstone,” Mailer is quoted as telling the actor Lane Smith, “You’re 86’d,” which the Times explained is “a barroom phrase that means ‘you’re banned in here.’” (Mailer proceeded to break Smith’s jaw.)

A more recent numeric verb is based on 404, the “not found” error message seen when navigating to wayward Web pages. As a verb, 404 means “to reach a page with a 404 error,” and the spelling 404’d (as in “I got 404’d!”) is far more common online than 404’ed or 404ed. Google’s recommendation of +1’d thus suggests a spelling standard has emerged for these peculiar numerals-as-verbs.

As for +1’ing for the present participle? Doyle suggests Google’s spelling choice here was made “strictly for consistency’s sake,” since the other forms use apostrophes. I would tend to agree, but my prediction is that if +1 takes off as a social-media verb, its actual use will be far messier than the tidy paradigm Google has constructed. So far, though, all of this “plus” lingo is leaving early Google+ users rather nonplussed, and some have even declared it, in the tradition of George Orwell’s Newspeak, doubleplusungood.