Two nations, over the air

Portrait of a rivalry in radio waves 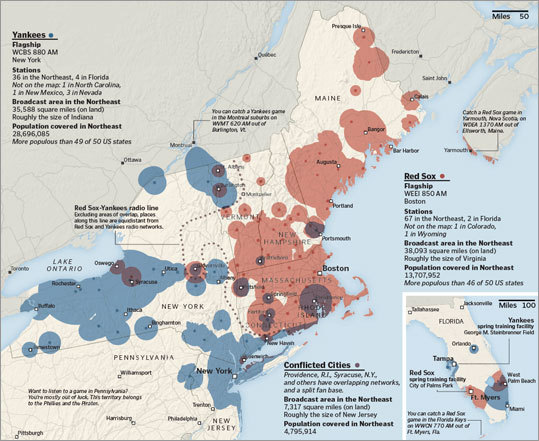 It’s a summer tradition that feels almost as old as summer itself: to hit the road with the car radio tuned to the game. As you leave the city and the game slowly crackles out of range, you scan the radio dial to find another station carrying the game, and another - until suddenly the Sox are off the dial and the only game on the radio is something else: a Yankees game.

There were no signs, no other way to tell that you just crossed a border. But you have, as surely as if you’d just sped recklessly through passport control. You are in foreign territory now.

Where does the border lie? How does the Northeast - on the radio, at least - sort itself into Yankees territory and Red Sox Nation? It changes a bit each year, as each ball club has a slightly different constellation of network affiliates scattered across the Northeast. To find out the constellations for 2011, we called both teams to draw a portrait of rival nations in the shape of their radio coverage.

In all, the Sox have 67 stations in the Northeast, and the Yankees have 36. (Why the disparity? The Red Sox have far more short-range FM stations, and the density of New York means the Yankees can cover their fan base with fewer stations.) Additional stations broadcast games for these teams in Colorado, Florida, Nevada, New Mexico, North Carolina, and Wyoming. Though not all games are broadcast on all stations, each station is treated equally on the map, with broadcast areas provided by the Federal Communications Commission. The dotted line tracks places that are equidistant from Red Sox and Yankees stations.

Sorted into red and blue, the radio map is a kind of cultural document. Where do Red Sox fans end and Yankees fans begin? And which regions are hopelessly conflicted? It will come as no surprise that the radio waves in Massachusetts are mostly ruled by the Red Sox and those in New York by the Yankees. But who would have guessed that Yarmouth, Nova Scotia, is Sox territory, while Montreal is Yankee blue? Approach any Red Sox fan on the street - what do you think their reaction would be to seeing that Yankees games can be picked up in every state in New England? There also seems to be a line of conflicted cities that can be drawn between Providence, R.I., and Oswego, N.Y. One must wonder what the scene was like in the sports bars of these towns during the 2003 and 2004 postseasons.

As for that border - except in a few spots, the dotted line on this map marks a kind of buffer zone, a radio no-man’s land. Rather than live in conflict, perhaps, some people realize it’s better not to take sides.

To view the radio map go to: http://www.boston.com/bostonglobe/ideas/articles/2011/07/10/two_nations_over_the_air/

Tim Wallace is a cartographer based in Madison, Wis., and coauthor of the Bostonography blog.