What toy makers assume about girls and boys 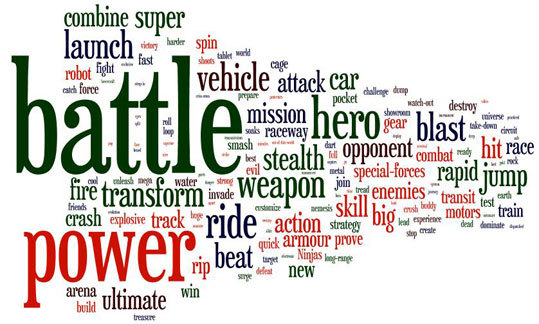 The warrior or the princess. Every child is one or the other. Or if they aren’t, you’d never know it by watching toy commercials.

Toronto-based writer Crystal Smith, author of “The Achilles Effect: What Pop Culture is Teaching Young Boys about Masculinity,” was curious about the language used in toy commercials targeting boys. So she decided to conduct an informal study. The mother of two boys herself, Smith kept track of the brands she saw advertised during male-centric television shows –toys like Matchbox, Transformers, and Nerf–and tallied up the nouns and verbs she heard most.

Smith had an idea of what to expect: she knew they’d be heavy on aggressive words like “heroes,” “stealth,” and “ultimate.” When she mapped all 658 words she’d recorded from 27 commercials, the results of her experiment ended up surprising even her: She didn’t expect the ads “to be so dominated by the word ‘battle’ and the word ‘power.’”

On her blog, www.achilleseffect.com, Smith posted her findings in the form of a word cloud generated by the online tool Wordle, where the size of the word shown corresponds to its relative frequency. What emerged was a striking version of the landscape of boys’ play, one in which words like “mission” and “special forces” take up decent real estate, and “opponent” and “enemies” outshine “friends.”

As marketing to children extends across multiple platforms–not just toys, but clothing, lunch boxes, books, sleeping bags, you name it–cultural critics have become worried about how sharply the gender lines are still drawn. In the world of toy advertising, it’s as though female astronauts and Title IX never happened.

Take, for instance, the Easy-Bake Oven, introduced in 1963 and still on the shelves.

“There are no toys on the boys’ side of the aisle that use the word ‘easy,’” says Bentley University marketing professor Susan Dobscha. “They’re encouraged to solve complicated problems.”

Not all toy marketing is stuck in the wayback machine, however. During Smith’s study of commercials, it wasn’t always boys’ toys she saw advertised during the male-targeted shows. “I was surprised to see as many Barbie commercials as I did,” she says.

Nicole Cammorata is a member of the Globe staff. E-mail ncammorata@boston.com.