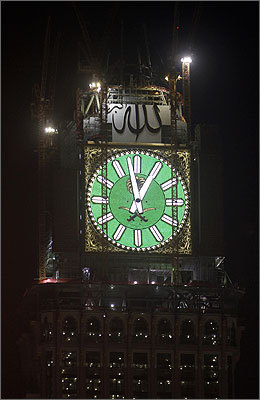 (AFP/AFP/Getty Images) The world's largest clock, which looms over the Grand Mosque in Islam's holiest city of Mecca.
By Adam Barrows June 19, 2011

Last August, on the first day of Ramadan, the largest clock in the world began ticking for the first time. The Mecca Clock, designed to serve as the authoritative timepiece for the world’s 1.5 billion Muslims and positioned at the top of the world’s largest clock tower, poses not only an architectural challenge to England’s iconic Big Ben, but a political one as well. Defying the global agreement to consider Greenwich, England, the zero-point for measuring time and space — based on when the sun crosses over that meridian — the clock was constructed to run not on Greenwich Mean Time but on Mecca Time, with Mecca as prime meridian. This means that the Mecca Clock, and anyone who sets a watch by it, deviates from standard time by roughly 21 minutes.

To most of us, protesting Greenwich Mean Time (or its Greenwich-based modern successor, Universal Coordinated Time) may seem bizarre. Synchronizing every clock on earth to the minute offers innumerable advantages for global communication and travel, and most of us have become accustomed to the ease of moving our hour hands forward or backward based on time zones, which are in turn based on longitudinal distance from Greenwich. But in fact, consensus on world standard time isn’t much more than a century old — and was the subject of protest right from the beginning.

What we all accept as the global standard for time dates back to a meeting held just 127 years ago: the 1884 International Meridian Conference, which was convened not in England but right here in the United States. In the course of the proceedings, representatives from 24 “civilized” nations selected the longitudinal meridian passing through the Greenwich Royal Observatory as the world’s prime meridian, from which time in all nations would be calculated.

This may sound like a rare moment of international consensus amid a moment of otherwise fierce imperial rivalries — a pragmatic and cooperative look ahead to our global, industrial present. But a closer look at the conference archives and at the ensuing decades of protest suggest that the Greenwich-based standard for time has always been a fraught topic. The Mecca Clock is only the latest objection to those who helped to make Greenwich Mean Time synonymous with time itself — and it reminds us that behind what seems like the eternal universal of global time is a tenuous, recent, and human history.

Before the International Meridian Conference, most localities set their clocks to the time determined by their own national or local observatories, or to sundials if they had no access to any observatory-based local time. These local times could deviate fairly dramatically from one another. Ireland, for example, set its clocks to a time determined by its Dunsink Observatory, which ran 25 minutes later than Greenwich, a discrepancy that led to an old British joke about an Irishman who always shows up to his London business appointments half an hour late.

Frustrated by such inefficiencies, industrialists such as the Scottish-born, Canadian engineer Sandford Fleming began in the 1870s to argue for the establishment of a universal time standard. This “cosmopolitan” system, Fleming argued, would benefit not only “men of business” but also the “entire family of man.” Under pressure from Fleming and other industrialists, astronomers, and geographers, who promoted Greenwich as the logical choice given its role as prime meridian in most nautical charts, President Chester Arthur convened the International Meridian Conference in 1884, in Washington, D.C. The delegates included a range of scientific experts, politicians, and military officers from all the major European powers, though the United States, with five delegates, and the United Kingdom, with four, were best represented. South American nations sent only one delegate each; a single delegate from Japan represented East Asia, while one from the Ottoman Empire represented the Muslim world.

While the conference invitation asked participants to consider Greenwich as a “common zero of longitude as well as a standard of time-reckoning throughout the globe,” it became immediately clear in the debates that even if a common Greenwich longitude could be found acceptable, consensus on “universal time” was lacking. When a handful of UK delegates, led aggressively by Sandford Fleming, tried to advocate for Greenwich as regulator of the world’s clocks, delegates pushed back hard. Representatives from France, Germany, Italy, and even one of Fleming’s fellow UK delegates objected to making the time standard part of the discussion, while a delegate from Spain moved that the conference draft an official statement declaring its refusal to recommend Greenwich for “universal time.”

Rustem Effendi, the representative from the Ottoman Empire, argued that a Greenwich-based “universal hour” would substantially benefit only large industrial powers like the United States, Canada, the British Empire, and Russia, and would take away small nations’ power to regulate their own cultural rhythms and practices. Most of his people, he said, were “agricultural, working in the fields, and prefer to count to sunset; besides, the Moslem prayers are counted from sundown to sundown.” The delegates were finally able to eke out an agreement on Greenwich as prime meridian only as limited to “specialized scientific activities.” As one British general representing India said, “Our universal day is not to interfere in any way with the use of civil or other standard time.”

This, however, might have been wishful thinking. While few nations took action to change their official civil time in the immediate wake of the conference, many industrial powers began to struggle with the often awkward and impracticable distinction between their Greenwich-synchronized transportation networks and the civil time set by local or national observatories. Belgium, which had been willing to consider a narrow adoption of a Greenwich meridian but objected to its incursion into civil life, finally conceded in 1892. In Ireland, Dublin continued until World War I to observe two times: a Greenwich-based time for its seaport and a Dunsink-based time for all its city clocks, a situation that notoriously led James Joyce’s clock-watching character Leopold Bloom, in “Ulysses,” into confusion. The French, meanwhile, who had sworn going into the conference that they would never recognize Greenwich for anything, provided the most boisterous model of noncompliance. As one French railway administrator stated in 1899, their sense was that nations “should consider it their business, and only theirs, to suit time to their own needs.”

Meanwhile, the Greenwich Observatory itself, with its new symbolic resonance as the seat of global time, became a target for political protest and even terrorist attacks. In 1894, on the 10th anniversary of the Washington conference, a French anarchist named Martial Bourdin detonated a bomb in the park outside the observatory, blowing himself up in the process. While he left no record of his motivations, Scotland Yard and the London Times agreed that the bomber’s outrage had clearly been directed against the Greenwich Observatory. Joseph Conrad was impressed enough with this incident to fictionalize it in his 1907 novel, “The Secret Agent,” in which a spy is coerced into bombing the Prime Meridian in an effort to jolt the middle classes of England out of their “idiotic vanity.” A few years later, in 1915, British police put the observatory under armed guard after getting word of a plot to disable the building — by suffragettes. “Wait till they start on the Greenwich Observatory,” a man reported having heard a “well-known suffragette” say to her friend on a tram car; “London, without time, will cause them to wake up.”

Ultimately, World War I would quiet things down on the protest front, as local autonomy gave way to the Allied war effort. Among other uses, broadly synchronized time was important for effective troop deployment. Even Ireland, after accepting Greenwich time as a temporary war measure in 1914, would make the shift permanent in 1916. By the time the war ended, the Ottoman Empire was no more, and even Turkey had consented to the change, the last of the vocally dissenting conference participants to do so. The standard had become a matter of course, and resistance to Greenwich and its dominion over world clocks sank, for the most part, out of sight.

Even if World War I quelled most of the overt protest, the time zones that we take for granted have been subjected to various forms of pressure over the 20th century. The daylight saving movement, instituted in Germany as a wartime measure to conserve coal and adopted by the United States in 1918, runs counter to the logic of Greenwich-based time, allowing nations to deviate from their position in the system to capture sunlight hours or promote economic efficiency. More recently, Thailand’s prime minister fought a losing campaign to alter his country’s standard time in order to coordinate with the Hong Kong stock market. England itself is considering permanently altering its time to one hour before Greenwich Mean Time, a measure that has received vocal support from Prime Minister David Cameron.

The Mecca Clock is a more aggressive challenge to the Greenwich standard, countering not only the specific time assigned but the very notion of a global standard seated in the West. As such, far more than daylight saving time, it shares the spirit of the broader and fiercer original objections to Greenwich Mean Time, and even of the symbolic threats on the observatory. The problem is that nearly one year after its initial unveiling, the Mecca Clock (which, after a three-month test last year, is undergoing further construction) has failed to gain widespread political traction. In an online poll by an Arabian business news site, only 15 percent of respondents stated they would change their watches to Mecca Time, while more than 57 percent affirmed their belief that Greenwich should remain the standard. After initial pronouncements that Mecca Time would stand proudly “in the face of Greenwich,” the Royal Hotel Clock Tower has generated more debate over its garish architecture than the time it plans to display.

In the end, having a global standard for time has been just as useful as Sandford Fleming predicted, whether for international shipping or for those of us calling family members in other countries. With globalization only increasing, Greenwich Mean Time and its direct descendent, atomic-based time, are unlikely to be overturned anytime soon. But the localities insisting on more temporal self-definition, adapting and altering their time zones to better address local concerns, represent a swing of the pendulum away from the flat standardization of Greenwich — a standard now so invisible to us that it takes a nearly 2,000-foot clock tower to make us take notice.

Adam Barrows is assistant professor of English at Carleton University. His first book, ”The Cosmic Time of Empire: Modern Britain and World Literature,” was published in December 2010 by the University of California Press. 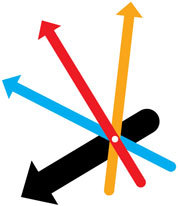