‘A body of water so foul’

A century ago, a bold environmental idea was hatched right in the center of Boston 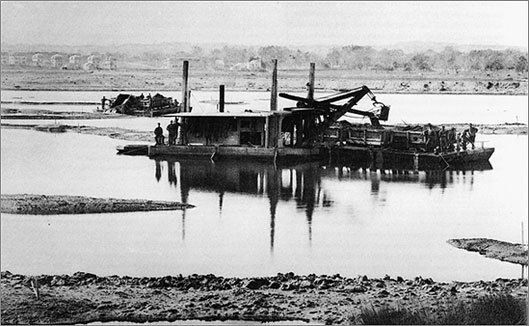 Of all the projects of the environmental movement, one of the most valuable — and most challenging — is wetlands restoration. Turning a suburban dump or an abandoned strip mall into a revived natural area has huge benefits, from creating new habitats for wildlife to providing crucial flood protection for the people who live nearby. In difficulty and expense, but also in potential payoff, wetlands restorations are impressive endeavors.

They also seem quintessentially modern, requiring not only technological know-how but also the ability to navigate a maze of conflicting interests — city councils, government regulators, commercial developers, and the public. And the notion of artificially returning a piece of land to its original state seems very much the product of a contemporary sensibility. It may come as a surprise, then, that the first wetlands restoration project happened more than a century ago — and it happened in the center of Boston.

Frederick Law Olmsted didn’t use the term “wetlands restoration” when he crafted a plan for the park now known as the Back Bay Fens. But just the same, that’s what he created. The history of this piece of land offers vital insight into our ever-thorny relationship with nature — and shows that the current thinking about how to reshape our urban landscape has far deeper roots than we imagine.

In Colonial times, the area now called the Fens was a salt marsh, a beloved staple of New England’s natural scenery. There’s even an old map of Boston where the area is labeled “salt meadow.” At high tide, the overflow from the Charles River washed across flats generously dotted with stands of salt grass. At low tide, the water’s flow reversed; away it ebbed in intricate rivulets. But as the city prospered, fresh land was needed to accommodate a growing population. As Boston spread out from its original tiny peninsula, whole neighborhoods such as the Back Bay and the South End were created by landfill.

Soon the city surrounded the salt marsh. Residents began tossing in garbage, and the marsh quickly transformed into a waste dump. Native plants such as sedge grass mostly died, and what was left behind was ugly, murky, swampy, and — on a hot summer day — olfactory torture. A 19th-century account describes it as “being without a single attractive feature. A body of water so foul that even clams and eels cannot live in it.”

To fix up this malodorous mess, the Boston park commission held a contest in 1878, soliciting proposals from the public. There were 23 entries. The less-than-impressive winning submission came from a florist, who suggested simply superimposing an ornamental garden onto the swampland. American Architect and Building News described the design as “childish.”

The city paid the florist the $500 prize he was due and sent him packing. It was time to call in Olmsted.

By this time, Olmsted was well established as the pioneering landscape architect behind Central Park, the US Capitol grounds, and dozens of other green spaces throughout America. Upon surveying this misbegotten stretch of the Back Bay, he quickly grasped what it had once been, and what it was capable of being again. This was a salt marsh — now a particularly vile specimen — but a salt marsh nonetheless. Turning this boggy land into a traditional park, he was sure, made no sense at all. Instead, Olmsted made a radical suggestion: Why not restore it to its original wetlands condition?

As innovative a thinker as he was, it’s hard not to see a bit of personal psychology at work here as well. This commission had come at a painful time for Olmsted, both personally and professionally. For most of the past three decades, he had been living in New York, but his projects in the city were drying up. A few years earlier, he had also lost his beloved father. He’d then engaged in a bruising estate battle with his mother-in-law. Returning to his native Hartford to live was simply out of the question.

Olmsted had vivid memories of salt marshes from boyhood “loitering journeys” he’d taken with his father through New England. This project, then, amounted to creating a sliver of landscape memory — his own and Colonial Boston’s — right in the middle of the city.

On Oct. 24, 1878, Olmsted presented his preliminary plan to the Boston park commissioners. They accepted it immediately. But Olmsted knew it would be more than a simple park project, and he requested a meeting with the city engineer. The city engineer brought along the superintendent of sewers, and the three men huddled for four hours. Olmsted had vast experience with landscape projects and, unlike the naive florist, he recognized this wasn’t as easy as planting flowers on top of the swamp. This was an engineering challenge. When he was convinced that the plan was technologically feasible, he agreed to move forward.

As a first step, intercepting sewers were built to catch refuse. Gates were installed to regulate the flow between the marshland and the Charles River, which was then still a tidal estuary where saltwater and freshwater mixed. Once the engineering infrastructure was worked out, Olmsted focused on wetlands restoration. He designed a creek, dredged out of muck, to following a meandering, sinuous path — more “natural” than nature. As for plantings, he experimented with dozens of salt-tolerant varieties to see what would take hold. The records are hazy, but it appears that he introduced plants such as tamarisk, a species native to Asia that made its first appearance in America during the 19th century. Olmsted — no native-plant purist — was more interested in capturing the essence of the salt marshes he fondly remembered from boyhood than in replicating nature down to the last detail.

As a final step, Olmsted insisted on naming his creation. The commissioners favored “Back Bay Park.” But Olmsted had taken pains to convey that this was not a park in any ordinary sense. True, he designed paths way up on embankments. But the idea was for visitors to view the salt marsh from a distance — to look, not touch. Olmsted owned a dictionary published in 1706, which he consulted when looking for suitably old-fangled terms. He suggested “fens,” an arcane word for a soupy piece of land. The name stuck, and today is spread throughout the vicinity — most prominently in the name of Fenway Park.

The Back Bay Fens was a smashing success. The commissioners asked Olmsted to design a whole series of interconnected parks, what became the Emerald Necklace. Flush with work, Olmsted finally felt comfortable leaving New York City, and moved to Brookline. He’d found a way to return to New England, after all. Olmsted would operate his landscape architecture firm out of Brookline for the rest of his life.

The Fens has changed greatly since Olmsted’s day. In 1910, the damming of the Charles River turned a salt marsh into a freshwater marsh, requiring a whole new planting scheme. More recently, Olmsted’s creek has grown choked with invasive phragmites, a tall reed that spreads like aquatic kudzu and crowds out other plants. In some places, those sinuous curves are no longer even visible. But an $80 million project is about to begin that will eradicate the invasives, reshape and replant the shorelines, and attend to the serious flooding problems in some other waterways in the Emerald Necklace.

Like the modern restoration efforts that echo the idea he hatched more than a century ago, Olmsted’s project was an act of approximation. It’s impossible to return a once-wild place to a pristine state. And, as Olmsted’s twisting watercourse suggests, when humans intervene in a natural setting, it’s hard to resist the urge to subtly improve on the original. We can see the impulse in walking trails added to restored wetlands, or in plans for mosquito management. We want the wetlands, but we can do without their inconveniences.

In creating the Back Bay Fens, Olmsted addressed this same issue — how true to nature should we be? — and drew his own highly personal conclusions. With the Fens set to undergo a multiyear, multimillion-dollar refurbishment, the issue is about to be addressed anew in a complex, 21st-century city. Once again, a great deal of high-tech intervention will be required — a natural environment sought through unnatural means — and the end result will be an approximation, as always. But it’s also sure to remind us that there’s real beauty in the human act of trying to reclaim what’s been lost.

Justin Martin is the author of a new biography, ”Genius of Place: The Life of Frederick Law Olmsted” (Da Capo).