My Journey, With Handsome Gold Edging

Inside the world of the luxury presidential memoir 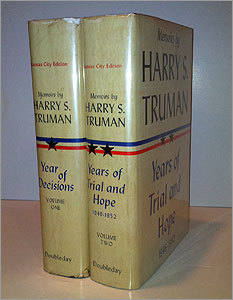 With more than five months on the bestseller list — and more than 2 million copies sold — George W. Bush’s “Decision Points” seems to have satisfied lots of customers. But what about the book’s limited edition — the hand-signed, hand-numbered deluxe version that comes with a slipcase, a “special color photo frontispiece,” and a price tag of $350?

Bush’s limited edition, it turns out, has satisfied too many customers. In April of last year, Crown, the publisher of “Decision Points,” announced that the print run would be 1,000 copies. Crown ended up releasing 4,700 copies in November — because, it says, of the “enormous demand.” This silent bump outraged presidential book collectors, many of whom had preordered the book precisely because it would be so rare. “I was very disappointed with what Crown did,” says Jim Hier, a Portland, Ore., collector who owns more than 400 different books signed by presidents and has written on the subject for Autograph magazine. “It was a violation of their initial stated intent.”

The “Decision Points” controversy has shined a light on a small and specialized corner of the book world: the limited edition, luxury presidential memoir. Every presidential memoirist since Truman has released such an edition, with print runs between 250 and 2,500 copies and retail prices — well, Ronald Reagan’s — going as high as $1,500. Those prices might seem artificially high, but the passion of presidential book collectors means that many editions have actually gained value since they first appeared.

And what of the books themselves? A look back over their history reveals something about not only the book market, but also the presidents who authorized them — and their evolving attitudes toward the marketing and monetizing of the nation’s highest office.

Calvin Coolidge “The Autobiography of Calvin Coolidge” (1929) The first limited edition of a presidential memoir arrived in 1929, when Calvin Coolidge published his slim “Autobiography.” Coolidge pieced the book together from his previously written magazine articles, but newspapers seemed more interested in the appearance of “a de luxe edition which Mr. Coolidge will autograph.” Coolidge’s publisher limited this edition, which came in a matching slipcase, to 1,000 copies — and priced it at $25, a steep increase over the hardcover’s $3 (and about $325 in today’s dollars).

Harry Truman “Memoirs” (2 volumes; 1955-56) Truman wrote what is considered to be the first modern presidential memoir, and his publisher, Doubleday, planned to release a special “Gateway Edition,” autographed by Truman and priced at $35. But the former president refused. “I cannot possibly enter into a program which would look as if I were selling autographs instead of a book,” Truman wrote to his editor. “I have a very strong feeling about any man, who has the honor of being an occupant of the White House in the greatest job in the history of the world, who would exploit that situation in any way, shape, or form.” As a compromise, Doubleday agreed to publish a 21,000-copy “Kansas City Edition” — its distinguishing feature was a map of Truman’s home state of Missouri — and Truman agreed to do the first book signing in presidential history, sitting in a Kansas City hotel, surrounded by television cameras and a band that played “Hail to the Chief.”

Richard Nixon “RN: The Memoirs of Richard Nixon” (1978) Truman’s successors did not share his stance on exploitation. Indeed, Dwight Eisenhower, Lyndon Johnson, Gerald Ford, and Jimmy Carter all oversaw limited editions of their presidential memoirs. (The one exception was George H. W. Bush, who did not write a true presidential memoir.) Still, no one measured up to Richard Nixon, whose publisher, Grosset & Dunlap, released not one but two limited editions: a $50 “deluxe” edition, which included a cloth-bound cover and slipcase; and a $250 “presentation” edition, which included a blue leather cover, 22-karat gold detailing, Nixon’s autograph, and a certificate of authenticity “suitable for framing.” In a direct mail campaign aimed at potential buyers, the publisher promised the limited edition would become “one of your most cherished possessions.” And the buyers responded: Both Nixon editions sold out within two months of “RN“ ‘s release.

Ronald Reagan “An American Life” (1990) The Reagan era saw limited-edition memoirs become more inclusive — Tip O’Neill’s and Oliver North’s memoirs both got one — and more extravagant. The $1,500 limited edition of “An American Life” set new standards for glamour: an oak case with velvet lining, a pull-out drawer containing six tapes of Reagan’s greatest speeches, and a leather-bound book autographed and stamped with the presidential seal. No other presidential edition has approached these production values, and, today, it feels like a perfect relic of ’80s excess.

George W. Bush “Decision Points” (2010) Like Bush’s “Decision Points,” Bill Clinton’s “My Life” also appeared in a $350 limited edition — published by Knopf, with a print run of 1,500 copies and no reaction stronger than a chuckle. Bush’s book seemed like it was heading down a similar path, until Stephen Gertz, who runs Booktryst, a rare books blog, began noticing some suspicious behavior in the edition’s marketing. Eventually, Crown admitted that it had dramatically increased the size of Bush’s edition — a decision that pleased the president’s fans, but ruined the book’s collecting cachet. “This is not a viable book from a collecting point of view,” Gertz wrote. “It will never become rare.” In a world that treats books like baseball cards, that’s the worst possible fate. Crown has set up a generous rebate program to placate collectors, and buyers of the limited edition can keep the book and get up to $300 back. (The offer expires June 30.) Of course, for presidential book collectors, the starting price has never been the point.