The origins of the odd language we use for weddings 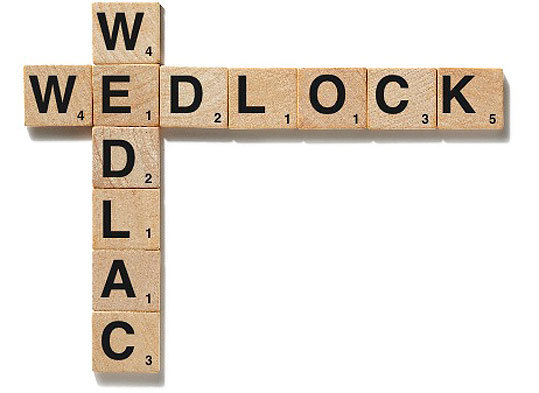 What could be more traditional than the words we use for pairing off? Not everyone, of course, goes as far as William and Kate, the new-wedded duke and duchess of Cambridge, with their “wilt thou” and “who giveth,” but everyone’s wedding vocabulary includes helpmate and bridegroom and witticisms on wedlock.

A plain-looking word, however, may have a convoluted past. Over centuries of use, some familiar wedding words have disguised their earlier selves, often morphing into shapes that look more logical to their users.

Take wedlock, which looks obvious enough — it’s the state of being joined in marriage. But that “lock” in wedlock is a red herring; the Old English word was wedlac, formed from wed, meaning “pledge, security,” and lac, a suffix indicating “actions or proceedings.” Wedlac, “marriage,” was literally the act of making the vows.

The old sense of the noun wed, “something pledged or pawned,” survived into the 19th century, at least (with the spelling wad) in Sir Walter Scott’s vocabulary: “I determined he should remain a wad, or hostage, for my safe back-coming.” But the suffix lac lacked staying power. By the 14th century, says the Oxford English Dictionary, it was all but extinct, and folk etymology soon turned the mysterious wedlac into plain wedlock. The ball-and-chain jokes were not far behind: Samuel Butler, in 1664, observed that “Wedlock without Love, some say, Is but a Lock without a Key,” and he probably wasn’t the first to make such a jest.

Then there’s bridegroom, which began its career as Old English brydguma, or “bride’s man.” After a few centuries, brydguma and brydgome and its variations retired from the scene; when the word was resuscitated, in the 1500s, the noun gome (meaning “man”) had gone extinct. So brydgome became bridegroom — a much more transparent word, since “groom” could mean “lad” at the time.

This development was fine with most people — Samuel Johnson put bridegroom into his 1755 dictionary without complaint — but Noah Webster, hard at work reforming American English, was nettled by the inaccuracy. He preferred bridegoom, says Merriam-Webster’s Dictionary of English Usage, and “he went so far as to enter and define bridegoom in his Dictionary of 1828.” Webster won some of his word battles, but his bridegoom campaign, luckily, was a bust. (Groom for bridegroom has been called inelegant, but it’s surely an improvement on goom.)

Helpmate is another word that once drove purists mad. “Absurd,” wrote Richard Grant White in his 1870 usage guide. “The fact that we are told in Genesis, ‘I will make him an help meet for him,’ and the fact that some imbecile or thoughtless person compounded the words into a synonym of wife, account for the subsequent perversion of this expression.” He has the story right: The “help meet” of the King James Bible meant “a helper suited to him,” who turned out to be Eve. But “imbeciles” like John Dryden hyphenated “help-meet,” creating a noun that didn’t make any apparent sense, and soon the more plausible helpmate was born. Helpmeet, for all its faults, has an archaic appeal that has helped it survive; it’s less popular than helpmate, but both versions are standard today.

Congratulations for the stealthiest evolution go to bridal, which appears so innocently adjectival in our many references to bridal showers and bridal gowns. In fact, bridal began as the Old English noun bryd-ealo, “bride-ale” — the wedding feast, named for its abundance of liquid refreshment. And the bridal toast, it turns out, began with actual toast — a bit of browned, spiced bread dipped into wine to give it flavor. The gents of 18th-century England transferred the word, figuratively, to the ladies whose health they drank — the ladies “being supposed to flavour a bumper like a spiced toast in the drink,” says the OED — and thence to the salute itself.

Finally, there’s the phrase in the Anglican wedding service that modern celebrants often find unparseable: “till death us do part.” (A widespread variation — ”till death us do part” — is equally problematic.) In this case, the mystery is more grammatical than etymological. The pledge means “till death parts us” so why is it “us do part” instead of “us does part” or, more archaically, “us doth part”? (Note to till-haters: Till is not only correct, but also older than until.)

The answer — provided by James E. Clapp, author of a law dictionary, and available online thanks to Random House — starts with that “do part.” When the Book of Common Prayer was first published in 1549, the text was “till death us depart” — not “departs” or “departeth.” “In those days,” writes Clapp, “it was customary to use the subjunctive mood in subordinate clauses describing action to take place in the indefinite future” — as in Job’s “though he slay me” or Shakespeare’s “if this be error and upon me proved.”

Depart, however, had lost the sense of “separate” when the prayer book was revised in 1662. The editors could have made it simply “till death us part,” which is properly subjunctive, but they chose to add the word do — preserving the familiar rhythm of the original, and ensuring the puzzlement of wedding guests for centuries to come.