Whatever happened to weeding? 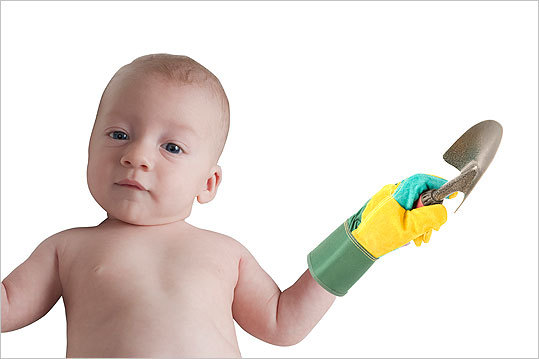 Dave Davies was hosting an interview on NPR’s “Fresh Air” last month, asking health policy analyst Gregg Bloche the usual questions about the high cost of health care, when he suddenly threw a lexical curveball. “If we know that a lot of the tests and treatments that we’re providing don’t really help, how do we get a handle on that?” asked Davies. “I mean, can you wean out those which aren’t effective?”

That “wean out”—yes, it’s in the transcript, too—might have been a slip of the tongue for the near-homophonic “weed out.” But within days, I heard it again, this time from a young teacher: “That’s how they wean out the worse students.” And, as usual, a bit of searching showed that it wasn’t as new or as rare as I might have guessed: There are scattered examples in news archives as far back as 1980, when The New York Times said the way to cut federal spending was “to wean out subsidies to well-to-do individuals and communities.”

And of course it’s easy to find the usage on the Web. “The rules will change after the first week—must wean out the slackers!” says a comment on an exercise program. “He told me that [the course] Nursing Process I is used to wean out the weak.” “The Government is determined to wean out the culprits.”

Weaning and weeding wouldn’t seem, at first glance, to have a lot in common. To wean means (literally) to remove a suckling mammal from its diet of mother’s milk—whether to mash, grass, kibble, or PB&J. Its source is the Old English verb wenian, “to accustom” (whence also our odd word wont, meaning “habit”: “He ignored the doorbell, as is his wont”). The figurative use of wean—“to detach...from some accustomed object of pursuit or enjoyment,” in the Oxford English Dictionary’s definition—is more recent, but dates back centuries: “Luther was a man weaned from the world” (1670).

But there are no weedy metaphors here. Nor are there any clues to the wean/weed mystery in the other “weeny” words: Even wean, “a child,” is just Scottish for wee ane, or “little one,” and no relation to wean the verb. Weenie also meant “a young child” (from wee) before it came to mean “a nerd,” with wiener as slang for “penis” making its contribution along the way. Teeny-weeny is an earlier weeny, just wee with an ending to make it rhyme nicely. And ween is an old verb meaning “believe, expect,” as Gilbert and Sullivan fans know: “That junior partnership, I ween, was the only ship I ever had seen.”

There is one other modern variation on wean that briefly vexed the language mavens: The now familiar construction “they were weaned on TV cartoons.” Merriam-Webster’s Dictionary of English Usage traces it to 1931—“Babies are being weaned on aspirin to fortify them for the economic headaches they will certainly face,” wrote comedian Fred Allen—and since the 1970s it has been widespread. It flourished, however, over the objections of sticklers who said wean properly meant “remove from a food source,” not “feed” or “supply with.”

This fine parsing cut no ice with the average speaker, however. As the American Heritage Dictionary points out in its usage note, weaning isn’t just deprivation: It “involves a substitution of some other form of nourishment for mother’s milk.” So there’s no reason we can’t take “weaned on folk music” to mean “exposed to folk music from childhood.”

We can also be weaned off (or wean ourselves from) a medication or cigarettes or Coke. Even weaned out occasionally makes sense: “I was weaned out of that belief,” “he was weaned out of a medically induced coma.” But those uses don’t get us any closer to a synonym for “weeded out.”

So here’s a wild guess: Maybe people who use “wean out” to mean “cull” are just extending the metaphor a bit further. The guy who says “the Government is determined to wean out the culprits” just might be thinking of it as thinning a litter—depriving the least deserving individuals of their usual nourishment.

After all, the image of public employees as parasitic freeloaders dates at least to the 1880s, when an Ohio newspaper complained about a skeptical climate scientist: “It is but natural for teachers in the schools and scientists who draw milk from the government teat to oppose everything not found in the text books.” So it’s possible that “weaning” has been gradually accumulating a sense something like “kicking off the gravy train.”

But none of the examples I’ve seen offer any explicit support for that theory. So we’ll wait for the “wean out” contingent to tell us: When you propose “weaning out” something, are you thinking of separating the losers from their babylike dependency? Is it punitive or neutral? Or is it just a new way to say “weed out” that’s spreading—as language fads will— like a weed?