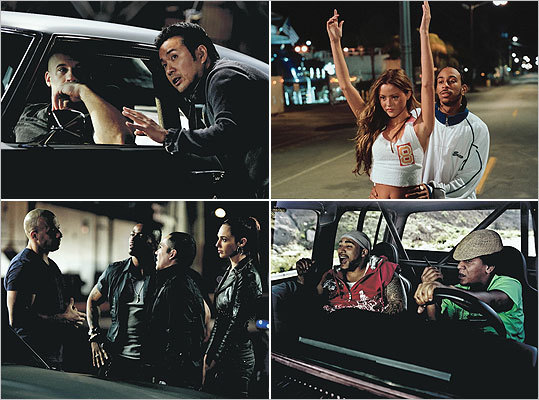 Right now, anyone who watches a lot of television, or listens to pop music, is familiar with a certain vision of America. If not exactly colorblind, this America is one in which different races easily interact, in which a white person might have an Asian boss, Hispanic stepson, or African-American frenemy. On TV, Khloé Kardashian, the part-Armenian mega-celebrity, has a new reality series about her marriage to the Los Angeles Laker Lamar Odom, who is black. In the music world, no one has time to notice that the Black Eyed Peas are ambiguously, strategically cross-racial because it’s much more important to debate whether their infectiousness is awful.

Then there’s a different America: the one in the movies. Of the 30 highest grossing films from last year, only two featured major nonwhite characters. One of them—“The Karate Kid”—was set in China. The other, “Grown Ups,” had a couple of scenes for Chris Rock (black) and Rob Schneider (part Filipino). The year before, only six of the top 30 had mixed casts—and two of those (“Avatar,” “District 9”) featured races that were computer-generated effects. The dismay over the overwhelming predominance of whiteness at the movies is almost as old as the movies themselves, but the divergence from normal American experience seems to be, if anything, getting worse.

There is one glaring exception. If you reach back to 2001, you’ll see the list of top-grossing movies has recurrently featured a hit series whose nod to diversity goes far beyond sassy neighbors, illiterate linebackers, or Will Smith. It’s a collection of movies that in its Utopian way puts blacks, whites, Asians, Hispanics, and their various combinations on equal footing. It would be like a grown-up “Sesame Street,” except for the deadly road races, and the fact that the puppets have tattoos, guns, muscles, bald heads, and a ton of moving violations.

Go on and laugh your Benetton, Kumbaya, Kashi, quinoa laugh, but it’s true: The most progressive force in Hollywood today is the “Fast and Furious” movies. They’re loud, ludicrous, and visually incoherent. They’re also the last bunch of movies you’d expect to see in the same sentence as “incredibly important.” But they are—if only because they feature race as a fact of life as opposed to a social problem or an occasion for self-congratulation. (And this doesn’t even account for the gay tension between the male leads, and the occasional crypto-lesbian make-out.)

The fifth installment, “Fast Five,” comes out Friday, and unlike most movies that feature actors of different races, the mixing is neither superficial nor topical. It has been increasingly thorough as the series goes on—and mostly unacknowledged. That this should seem so strange, so rare, merely underscores how far Hollywood has drifted from the rest of culture.

The movies have often dealt with race, of course, and when they do they tend to treat it as a serious and unwieldy problem. Sidney Poitier became a star in part by helping black and white Americans negotiate their new relationship in the post-Civil Rights era. As a rule, white characters—through white writers and directors—do a lot of the talking in these movies. Black characters rarely travel a similar dramatic arc. The bravery of Stanley Kramer’s “Guess Who’s Coming to Dinner” amounted to two Hollywood legends—Katharine Hepburn and Spencer Tracy—telling the world that a black son-in-law is something they can live with, and so should you, especially if he looks like Sidney Poitier and has degrees from Johns Hopkins and Yale.

That is the loose history of race as a subject in Hollywood: the province of a liberal white industry that wanted to promote fairness and equality, often at the expense of realism and sometimes at the cost of the black characters’ humanness. Movies about race still tend to be self-congratulatory (“Crash”) or mine tension for comedy, the way “48 Hours” and its offspring have. As a rule, a movie starring a white guy and a black guy is a movie about a white guy and a black guy. The enormous success of 2009’s “The Blind Side,” in which Sandra Bullock makes a black teenager one of the family, demonstrates that America isn’t post-racial. It is thoroughly mired in race—the myths that surround it, the guilt it inspires, the discomfort it causes, the struggle to transcend it.

The “Fast and Furious” movies, by contrast, are free of this angst. They’re basically a prolonged party for a ring of street-racing urban car thieves. The leader of the ring, Dom, is a big, racially ambiguous mechanic played by Vin Diesel. The hero of the movie’s first installment, in 2001, was Brian O’Conner, a blue-eyed, blond LAPD detective played by Paul Walker. As a classic white-cop hero, with a surfer-boy vibe, he was presumably meant to be the audience’s point of entry into the movie’s multiracial car-racing world.

That world, however, was the star. It was a place the movies had never precisely seen before: gangs of young people of different races unified by automotive exhilaration. There were blacks, Asians of all kinds, Mexicans, Michelle Rodriguez, and whatever Vin Diesel and Jordana Brewster are. Friction exists among the factions, but it’s just the organic sort you expect from a bunch of marginal kids engaged in a variety of illegal hobbies. It’s funny and almost touching how well Detective O’Conner fits in with these gearheads and speed freaks. He ends up feeling so at home among them that he helps his new blood brother, Dom, evade arrest.

Since then, the series has spiraled even further into a world that’s post-racial, post-American, post-almost every category you can think of, including coherent. The second movie, in 2003, teamed Brian up with an ex-con, played by the African-American model and R&B singer Tyrese. The third (“Tokyo Drift,” 2006) lost the original characters and introduced a sullen white southerner (Lucas Black) who, in Japan, befriends a black American guy (Bow Wow), learns a highly specialized car trick, and steals a yakuza’s girl. The fourth installment restored Brian and Dom to the franchise and moved business to the Dominican Republic. “Fast Five” sends the gang to Brazil, brings back Tyrese, and invites the half-black, half-Samoan Dwayne “The Rock” Johnson to chase Brian and Dom around Rio.

All the racial mixing isn’t idealized, and isn’t untouched by the reality of race in America today. Brian’s ability to move from one side of the law to the other seems as much the result of white privilege as it does bad screenwriting. And it’s useful to remember that most of the nonwhite characters aren’t upstanding businessmen or girls-next-door—they’re robbers and car thieves. But the weird excitement of these movies, if you take them together, is how they distort reality to create the illusion of revolution. The movies give us felons who seem, even unwittingly, like they’re fighting for something—say, for the normalization of racial integration at the movies. Some of us grimaced when John Singleton, the director of “Boyz n the Hood,” signed on to direct the first sequel. It seemed desperate. He should be out doing something important, we thought—but, as it turns out, that’s exactly what he was doing.

It’s a strange thing to see these movies as a novelty in 2011, and not because Barack Obama is president. The series has grossed just under $1 billion, and for the young and youngish people who’ve bought tickets (and rented and downloaded it), this is just how the world looks. And it’s how a lot of pop culture looks, too. Last February’s Grammys telecast was a cross-racial bonanza, whose highlight was the team-up of Janelle Monáe, B.o.B, and Bruno Mars, two black artists and one half-Hispanic, half-Filipino, all popular, who, for one evening, tinkered with pop, hip-hop, and rock so that the music they made no longer had a genre.

The movies, meanwhile, have become lucrative in their segregation. While most major-studio productions feature white casts, Tyler Perry has capitalized on the void. In less than a decade, his all-black melodramadies have helped Perry build an entertainment empire that caters to an underserved black audience. Perry works independently, and his success demonstrates that Hollywood has just been ignoring the needs of a significant moviegoing bloc. From this, the major studios have taken perhaps the wrong lesson: more all-black movies. It’s a development that appears to obviate a need for more integrated ones.

In a sense, the balkanization of movies would appear to be an example of how much culture has splintered into niches—more proof, if we needed it, that we no longer watch, listen to, or read the same material. But moviegoing is one of our last shared public acts. Hundreds of millions of people continue to watch movies together, and it’s easy to scan the house and see who’s watching with you. Were you to visit the big theaters in Boston—the AMC Boston Common or the Regal Fenway—you’d see that the audiences at both complexes are often diverse. The movies are not.

You wouldn’t draw much of a popular audience, mixed or otherwise, to a movie about race, of course. And that is the accidental genius of the “Fast and Furious” movies. They’re not about race. Race—and casualness about race—is just their hallmark. They’re about something else, a great American unifying principle: sexy cars that everybody wants to drive.

Even (or maybe especially) when they’re demolishing the Dominican Republic or tearing up Brazil, these films couldn’t be more American. If we don’t know where race is headed in this country, or where in the movies it ought to be, perhaps we should climb aboard. In the end, it might not be Barack Obama who drives us into the future. It may just be Vin Diesel and The Rock.