The rise of a new American culture 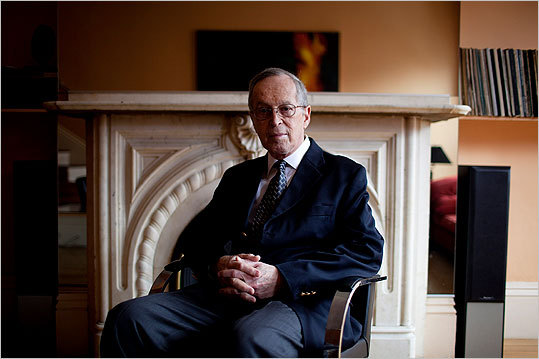 (Yoon S. Byun/Globe Staff) Professor Harlan Lane recently published a book that looked at whether deaf people have their own culture.
By Margot Sanger-Katz April 10, 2011

For adults who lose their hearing, deafness is an obvious disability, a physical problem that impairs their ability to communicate with family, friends, and the rest of the hearing world. But that is not how the hereditary deaf in this country understand not being able to hear: Deafness is, instead, a key to their identity and a point of pride.

In “People of the Eye: Deaf Ethnicity and Ancestry,” Harlan Lane, Richard C. Pillard, and Ulf Hedberg argue that the rest of the country also needs a different perspective on deaf culture. The half million hereditary deaf in this country, they say, should be understood as an ethnic group, with many of the same qualities that define more commonly recognized ethnicities: A common language, shared ancestry, common stories and artistic traditions, and a community that perpetuates cultural norms through the generations. Key to deaf culture is American Sign Language, a robust language with a complex vocabulary and a grammar distinct from English. For the community that the book’s authors call “Deaf-world,” that language is the basis for shared artistic and cultural traditions, and the basis for much of the deaf community’s isolation from mainstream American culture.

Lane, a psychology professor at Northeastern University, has been studying deaf culture and linguistics since the 1970s, ever since he witnessed a deaf duo conversing and was stunned to learn of the depth and complexity of ASL. He said his studies have shown him the surprising degree of richness in deaf language and culture — and the deep fissures between the way the mainstream culture regards deaf people and the way they view themselves.

He spoke to Ideas by phone.

IDEAS: Nine out of 10 deaf people marry other deaf people. Why is deaf marriage so common?

LANE: Deaf people marry deaf more than any other minority. I think that’s very significant. It just shows you how inept the concept of disability is for these people, because people who are blind as a rule do not want to marry other blind people. People in wheelchairs do not seek other people in wheelchairs. I mean, there may be individuals who do, but as a cultural norm, it tells you that something is up here. And what’s up is the value placed on being deaf.

IDEAS: Your book argues that most people in mainstream deaf culture don’t view themselves as disabled. Why not? To a hearing person, this seems counterintuitive.

LANE: One disability scholar says that deaf people reject the idea that they have a disability because there’s a stigma associated with disability and deaf people are trying to duck the stigma. In my view, that simply fails to understand the deaf world. It’s a positive value being deaf. When a culturally deaf woman is pregnant, she is hoping — what they say, if I can summarize it briefly, is: I’ll love the child; it will be my child. But of course if it was deaf that would be really nice....Hispanic parents want to have a Hispanic child; black parents want to have a black child. That’s just human nature to want a child like the parents. So that’s one bit of evidence that deaf people don’t view themselves as disabled.

IDEAS: Does this mean they tend to oppose medical interventions for their deaf children, like cochlear implants?

LANE: Yes, I think that’s fair to say. There have been some surveys. And I’ve spoken with deaf adults, both those who have deaf children and those who don’t. And they’re horrified. To give an analogy, I’m looking for another ethnic group that has a distinctive physical correlative, and I’m coming up with the pygmies....If we told them we want to administer this growth hormone to your children, and they will be taller, and life will be easier for them, they would mostly be offended. Likewise with black Americans, if we told them we can make life a little easier for your kid because with a little plastic surgery and some skin lightening, which we can do nowadays, they’re going to “pass” more easily. I would step out of the way, because I might get punched, and justifiably so. If you’re talking about the deaf as an ethnic group, and what you’re offering them is to try to change them to make them more like the majority, because life is easier for the majority, that’s unethical.

IDEAS: The cochlear implant is not perfect. But over time, as medical interventions get better and deafness becomes more correctable, do you see this culture as being at risk of being erased by medicine?

LANE: Not in a practical way, I don’t. But ethically, of course, it’s wrong to try to eliminate a minority culture as part of a program. It all turns on the issue of disability. The parents and the surgeons, especially, can only see disability. And, of course, if you can mitigate a disability, that’s a good thing. But I, and deaf people, and others who know the deaf well see that there’s no disability here. There’s a physical difference, which many minorities have.

I hope that when better methods of prosthetic hearing come along that people will have due regard for the ethical issues, which are not just risks or benefits but also what’s right and wrong vis-a-vis a minority.

IDEAS: Why do you think it’s useful to consider the deaf an ethnic group? It’s not like that label is attached to any special legal rights.

LANE: When I was a kid and I went to school, what I learned was that Native Americans were savages. And we used to play games in which we killed the nasty Native Americans. And that’s not right to view them in that way. That doesn’t serve anyone’s interests. Similarly, with women. When I was a kid, women were assigned very specific roles by virtue of the fact that they give birth. It was obvious that women should be nurturing, and stay at home, and raise the children, and make good food, and so on. And while I’m not claiming that women are an ethnic group, it’s another example of how wrongly conceptualizing a group does great harm. It’s important to get it right.

Margot Sanger-Katz is a writer living in New Haven.